Jimmer soars in Asia, as his big brother Tj tells us in article

Editor’s note: Tj Fredette, older brother of Glens Falls-born basketball star Jimmer Fredette, submitted the following piece to The Chronicle several weeks ago. We have a chance to bring it to you now. Jimmer is in Asia. Tj is in the U.S., following progress on YouTube streams.

This past month my little brother Jimmer (along with my father) boarded a plane in San Francisco to travel over 6,000 miles away, literally clear across the planet, to begin an exciting but uncertain new chapter in his professional basketball career.

This season Jimmer will be playing for the Shanghai Sharks, a team that is owned by a living legend in China, known as Yao Ming, whose 7’5” physical stature is quite fitting for a city as colossal as Shanghai.

Upon arriving in the city, Jimmer told me two things immediately stood out to him…the traffic and the skyscrapers… and this is coming from a kid who is no stranger to large cities.

However, in a city with a population that exceeds 24,000,000 people (more than twice the size of New York City) it’s no wonder that the amount of tires hitting the pavement and buildings scraping the sky could be described as the Big Apple on steroids. 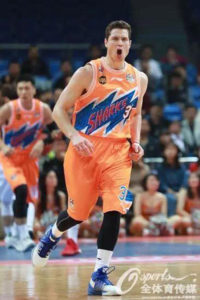 On the first day of practice, Jimmer and my father shared the exciting experience of meeting the newly inducted basketball Hall of Famer and Chinese megastar, Yao Ming.

My father told me that he had the privilege of speaking with Yao for nearly an hour discussing topics such as basketball, Chinese culture, and even religion.

Both Jimmer and my father said that Yao, as well as all of Jimmer’s new teammates and coaching staff, were all wonderful people who couldn’t stress enough that they would take great care of my little brother…..something that my mother and I back home were thrilled to hear.

Not long after arriving in Shanghai, Jimmer was off to Singapore to play in his first pre-season tournament against various teams representing different parts of Asia.

Without a proper training camp and with only a couple of practices under his belt, Jimmer was thrown into a set of basketball circumstances that he had never encountered in all of his time in the NBA.

With a roster full of unfamiliar faces, all of whom stem from very different basketball and cultural backgrounds (but surprisingly all speak at least some English), Jimmer and the Shanghai Sharks were scheduled to play back to back to back to back games….a grueling task to say the least for a kid who just flew clear across the world and had to adjust very quickly to jet lag and a 12 hour time change.

The first game Jimmer led the Sharks to an easy victory over a team from Taiwan with a game high 33 points and 6 assists.

The second game Jimmer again led his team in scoring with 28, as the Sharks cruised past a very scrappy team from the host country Singapore.

In game 3, Jimmer set a new personal high in scoring with 34 points, 6 rebounds and 3 assists, as the Sharks pulled off a third straight victory over a team from China, earning them the opportunity to play in the tournament championship.

In the championship game, The Sharks were set to take on a stacked team from the Philippines who featured Al Thornton, a former big-time scorer in the NBA.

In typical Al Thornton fashion, he ended up leading his team in scoring with a 36 point performance.

Jimmer, however, was stuck on 40 when he was fouled shooting a 3-pointer at the buzzer and was granted 3 foul shots with zero time left on the clock.

At this point his team was down by two, so he needed to make 2 shots to tie and 3 shots to win. Talk about starting off his overseas career with pressure!

Jimmer calmly stepped to the free throw line and swished the first shot. As fans then began screaming in an attempt to distract Jimmer, he stoically raised his arms, released the ball, and swished the second shot. The game was now tied!

The screams from the Filipino faithful in the stands really hit a peak as Jimmer confidently stepped up and let the ball roll off his fingertips for his third and final, potential game-winning free throw.

As the ball spiraled through the air amidst the shrieks of the intense crowd, one of Jimmer’s teammates, known as Pong, had already begun running out on to the court.

It was as though Jimmer had already earned the trust of his eager new teammate, who was right there at the foul line embracing him with a joyous hug, as Jimmer’s free throw swished through the net, giving the Sharks the one point championship victory!

I guess just like many of us watching through the YouTube stream back home, Pong knew there was no way that Jimmer was missing that final shot.