“A frozen fairy-tale world” of Ice Castles is planned for Lake George Village from January through as late as March 2022.

“The wonderment, when kids see that ice castle for the first time, that still gets me,” Jarred Henningsen, Vice President of Events, told The Chronicle in advance of a press conference in Lake George Tuesday. “This is definitely great for kids….

“What I tell people is, the Ice Castle is a must-see interactive attraction with cabins, slides, tunnels, crawl-through spaces that everyone will love.”

“Tickets are going to sell fast,” Mr. Henningsen predicted. “We encourage people to purchase in advance.”

Expected dates: January to March, depending on the weather. Tickets go on sale in December.

“Dress warmly. Then get out there and have fun. It’s a very interactive experience, a playful experience with all sorts of designs and features,” he said.

The Ice Castles are created “by carefully orchestrating the freezing of water,” said promo materials. 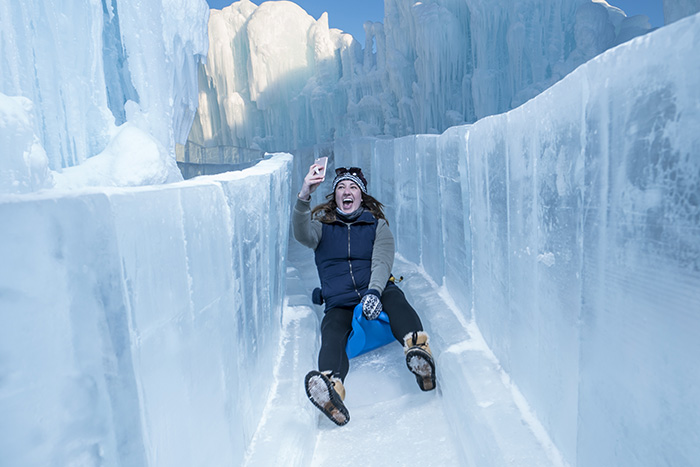 “Nature takes the lead,” Mr. Henningsen said. “It will take three to six weeks to build, depending on the weather. We need an extended period of cold weather.” The design incorporates giant “icicles.”

Mr. Henningsen said they are still completing the design for Lake George. “It will include some surprise features tied to the Lake George area,” he promises.

The concept began about 12 years ago when founder Brent Christensen built the first one in his backyard for his six children, says the Ice Castles website.

It was such a “huge” neighborhood hit he did it again the next winter, Mr. Henningsen said. In the third year, now 10 years ago, he was invited by a local ski resort to build a castle there — the start of the Ice Castles business. 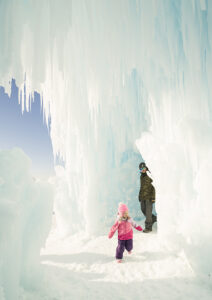 Why Lake George? “The town and local businesses were so welcoming. They put together a fantastic opportunity for us,” Mr. Henningsen said.

Warren County provided $50,000 in Occupancy Tax funding to help market the event. Beyond financial incentives, “Gina Mintzer and Joanne Connelly, from the Lake George Chamber and County Tourism were so welcoming, introducing us to the local community,” said Mr. Henningsen.

“It was that welcoming attitude with Joanne and Gina that really made us come to Lake George.”
The Ice Castle is expected to run in conjunction with the 60th annual Lake George Winter Carnival and the second year of the Winterfest promotional program launched by Lake George businesses last year to cope during the pandemic.

“We like to work with local businesses,” said Mr. Henningsen in “everything from partnerships, to seeking vendors at the local level,” and in logistics such as renting restrooms and dumpsters — “finding ways to increase their own business through partnerships.”

The Ice Castle will displace two other holiday events — the Holiday Lights and Christkindlemarkt — offered in recent Decembers at the Festival Commons.

Tourism chief: Could be a game-changing year

She added, “This could be a game-changing year.”