Chronicle editor Mark Frost writes: I wasn’t surprised at the throng that turned out Saturday at the “Service of Celebration & Remembrance for Debbie Collin” at Queensbury United Methodist Church on Aviation Road.

Debbie, who died on Jan. 28 of ALS (Lou Gehrig’s Disease) at the age of 64, was lifelong, bedrock Queensbury, and her warmth and enthusiasm elevated many lives, mine included. (She did the original oak tree sketch of The Chronicle logo in 1980.) There literally wasn’t a seat left in the church. Extra chairs were shuttled in until the sanctuary couldn’t hold anymore.

Tears were shed, but the service was profoundly positive, reflecting Debbie’s personality and way of life. 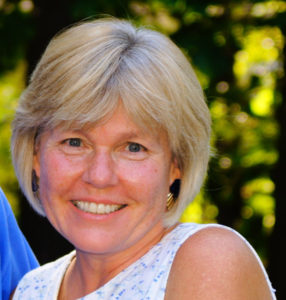 He pointed to where she sat on Sundays, told how even when the disease had stolen her ability to speak, he’d “see her arms raised as high as she could, in praise of her Creator.”

“ALS did not win,” said Rev. Phaneuf, “because Debbie never lost her faith.”

He said, “We are not bodies that have souls. We are souls that temporarily have bodies.”

“Debbie is not far from us,” the pastor told us. “It’s not as though they are whisked to some far off, distant place.” Rather, he said, Debbie Collin’s “life everlasting” is close by — an ongoing, enjoyable, inspiring presence in many people’s lives. For this service, Debbie chose the hymns and Bible passages — here for her family and friends, without end.