Republicans Gary Hobbs and Rob Smith and Democrat Greg Canale all are seeking the Warren County Judge seat now held by John Hall. Judge Hall, a Democrat, has reached the state’s retirement age for judges and must step down at the end of 2020. 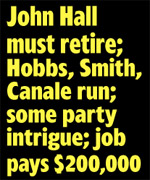 Because the new political calendar requires candidates to obtain petition signatures starting in mid-February, the race is on.

Rob Smith, 51, is Judge Hall’s long-time principal court attorney. Mr. Smith twice ran as a Democrat for Family Court Judge. He lost to Paulette Kershko in 2015 and to Ted Wilson in 2016.

This time Mr. Smith is running as a Republican. He has switched political parties.

“I was always a Republican,” he told The Chronicle. He said he was a Republican serving under the late Judge John Austin, then in 2003 changed to Democrats to “make myself more appealing” to be retained as court attorney by Democrat Judge Hall.

He said changing parties “hasn’t changed my desire to become a judge. I plan to put my best foot forward and hope my message resonates with the voters.”

“There is not a candidate out there that can offer the wealth of experience I have in those two courts,” he said. “…I’m the attorney for Judge Hall. When he has questions, he comes to me for answers. The only experience I lack is bench experience. It would be a pretty seamless transition. I’m ready for the next step.”

Why is he running for Warren County Judge? “I’m doing the job now. I think I’m the only candidate who has actually done the work of a judge. It’s a natural progression for me.

“I have presided over cases, from arraignments to felony trials. There are 200-plus cases I have tried. I have muscle memory. When I hear the start of a question, I know whether it’s objectionable.

“I’ve handled more than 70 appeals as an attorney at all levels. I know what the appellate court is looking for. And I’m the only candidate who supervises and trains judges on how to be judges.

“And I actually have put together a program intended to help the public, an opioid treatment court that has now been taken countywide and has an 87% success rate of participants being drug-free for 12 months or more, according to the Council for Prevention.”

He adds, “I’m very involved in the community. I’ve been a Cub Scout leader, a Little League coach, an AYHA manager…”

Greg Canale, 58, is a private practice attorney based in Queensbury who says he has 30 years of experience trying cases in every level of state court.

“I don’t believe in party politics, especially when you’re talking about becoming a judge.”

He said he’s qualified to be Warren County Judge because “I have been in the courts fighting for individuals and families for 30 years. I’ve tried hundreds of cases. I’m well-versed in criminal, civil and surrogate law, and I’ve been in the Appellate Division and the Court of Appeals, and in Federal District court.

“I have the utmost experience as a trial attorney. When you are in private practice, you get to see how the law has a real effect on people and families. I’ve had a front-row seat for 30 years. It’s very important to get the decision right.”

Mr. Canale said, “I can be a central part of helping people in recovery. I have first-hand knowledge through family members and my own personal experience.

“I’ve been sober for more than 13 years, and I know what it’s like to overcome personal struggles. I believe my candidacy can provide hope and inspiration, and show people that regardless of personal struggles, you can overcome them if you are willing to work hard.”

Other may enter the race

Democrat Julie Garcia, who just lost in the six-way race for four State Supreme Court judgeships in the Fourth Judicial District, says, “I am seriously considering a run, but I want to take a some time to breathe before deciding if I can commit. I will decide the first week in January.”

Warren County Democratic Chair Lynne Boecher said she knows of one other Democrat who might announce interest in running, but she wouldn’t provide a name.

Mike Grasso, the Warren County Republican Chair, said Mr. Hobbs and Mr. Smith are the only two Republicans to inform him of their intention to run.