The Chronicle’s Zander Frost writes: Peter Hoffman and his daughter Christiana have purchased the classic brick building at 20 Maple Street across from Crandall Public Library.

It was built circa 1870 as a carriage house for Henry Crandall, who gave Glens Falls both the library and Crandall Park.

“It was a carriage house and we really want to return it to its roots,” Mr. Hoffman told The Chronicle. He and his wife Suzanne have redeveloped many historic buildings in Glens Falls, including the former Post Office on Warren Street that now houses the Social Security office.

20 Maple has housed a succession of investment advisory firms, most recently Morgan Stanley Smith Barney, which sold it to the Hoffmans.

The Morgan Stanley office has relocated to the third floor of Mr. Hoffman’s redeveloped building at 86 Glen Street across from Cool Insuring Arena.

Mr. Hoffman said he expects to lease 20 Maple to commercial tenant(s), but he has no time-frame and says, no rush.

“It’s going to be a fun one, because it’s keeping what’s there, enhancing it and replacing what shouldn’t be there,” Mr. Hoffman said. “…Anything that we can, we replace with period pieces.”

They plan to return the main entrance to where the center window is now, incorporating handicap accessibility, and make the current door at the right a window again, complementing the left front.

“The windows have been bastardized through the years,” Mr. Hoffman said, adding, “it’ll get all new windows, all new HVAC, all new wiring.”

Plus, “it deserves to have a slate roof.”

Partnering with her father, this is Ms. Hoffman’s first property purchase.

“I live down in New York City now, but I’ve always been interested in the family business. My parents moved up here when I was 10,” she said.

Why now? “I’ve been around to see the changes in Glens Falls, see what my parents have done, and how the city has changed. And this is where my roots are. This is where my family is. I see myself moving back here at some point, so the timing was just right.”

“It’s amazed me the changes that I’ve seen over the last 18 years,” she added. “I still think there’s a ton of opportunity, being so close to Saratoga, so close to Lake George.”

Mr. Hoffman says she found an 1800’s weathervane to adorn the building. Asked where, she said, “Brimfield.” Brimfield, on Route 20 in Massachusetts, is famous for its antiques market. 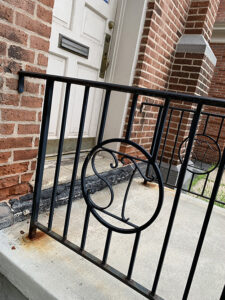 ‘ST’ in handrails for Spencer Trask; beyond finance, he & wife co-founded Yaddo & Wiawaka

The iron handrail going up the front steps at 20 Maple Street in Glens Falls incorporates the letters ST, for Spencer Trask (1844-1909), an American financier who founded the Spencer Trask advisory firm that is a predecessor of Morgan Stanley Smith Barney.

Mr. Trask, as a philanthropist with his wife Katrina, established Yaddo artists colony in Saratoga and Wiawaka, the Lake George women’s retreat. Both continue to operate.

The Trasks also bought Three Brothers Islands on Lake George. They envisioned and first installed the bridges and arch that connect the islands.