HF’s Strand is rolling; where it’s going next

“What a trip it’s been,” says Strand Theatre executive director and driving force Jonathan Newell, on the eve of the ninth anniversary on Dec. 22 of his Hudson River Music Hall group that operates the Strand.

“I remember when we were first in the [former Washington County] courthouse, and artists would say to me, ‘Why would I want to play in Hudson Falls?’

“Well, we made it a place that musicians want to play, where they can come and be free to play the music they want to. That’s great. Of course, it also means now I’m working all the time.”

Mr. Newell says “everything started” when his adult piano student asked what Mr. Newell would do with the man’s out-of-shape Steinway that needed repairs.

“I said I’d fix it up and I’d put it in a public place and use it to put on performances to bring the community together.

“He handed me a check for $15,000 and told me, get it done and follow that spirit. That was the start of everything, the spring of 2010. We fixed the piano and we carried that nine-foot piano up two flights of stairs into the Courthouse, on a dare.”

The Hudson River Music Hall progressed from the courthouse location to the nearby former telephone company building on Maple Street and finally to the Strand, which it purchased from the Town of Kingsbury (that had been using it as the town offices), then revived and renovated the theater.

Already there’s a busy schedule of events for next year, involving returning acts and fresh initiatives.

Busy schedule already for next year

“Part of the plan for 2020 is to find new audiences,” Mr. Newell says. “We want to have as many genres as we can, to keep reaching different audiences.

“I really want to beef up classical music offerings. We’re planning a monthly piano series, with our beautiful nine-foot Steinway. I would love to have more chamber music also.”

He said local promoters including Dave Ehmann and Pete Cloutier at WCKM/Regional Radio are in talks to book shows next year at the Strand.

“We have a bunch of shows booked for every month, but we still have lots of room on the calendar,” Mr. Newell says.

He said the theater’s finances are “on solid footing,” although, still, “it is week-to-week. It used to be we didn’t take a risk, but now we do more. We have some people we can go to, to see what the financial support is for an act.”

Mr. Newell, a musician himself, says, “Our mission is to support musicians, but ‘no margin, no mission.’ We can still book acts that only bring in 30 people, like the classical concerts, but it’s a lot nicer to get 30 percent of a $15,000 act.”

He says, “We pay all our bills, but we never have money left over it seems. Somehow it keeps showing up, though. Either we have a great couple of concerts or sometimes we have had to take out loans, but we keep moving forward. Selling the building [on Maple Street] is a big help.” See separate article.

Mr. Newell said they are still awaiting reimbursement on a $130,000 New York State grant arranged through Senator Betty Little’s office. He says it’s been 32 months since they completed the work and put in for the reimbursement.

More state grant money is coming, through Assembly member Carrie Woerner’s office, to repay the original purchase of the building and to put in the new roof, but that’s got to wait until the other payment comes through, Mr. Newell said.

Phase 2 plans in 2020 include replacing the roof of the theatre, and renovating upstairs office spaces above the lobby to house, on one side, the music library donated by Marie Fountaine, as well as the Strand’s offices, and a combined teaching space and public lounge.

Also on the second floor, they hope to renovate and rent the long-ago dental office (of the late Dr. Alfred Frost, Mark’s father). There is a “very interested” tenant, Mr. Newell said, but talks are still underway.

He said the Strand received a $50,000 grant from National Grid to support the upstairs renovations, as well as repairs to the building facade.

Mr. Newell said the renovations will need to include an interior staircase. Currently, the only access to the upstairs is through a separate exterior entry.

They also aim to renovate the building’s two basements for “badly needed” storage space, and to upgrade the two-story backstage and green room, adding a combination rehearsal space-lounge-dance studio in the backstage loft area.

Mr. Newell notes that the Strand’s old coal bin — yes, still containing coal — remains in the basement. He said they are looking for a taker for the coal.

The Strand’s only paid employee

As executive director, Mr. Newell is the theatre’s only paid staff person, supported by a core group of volunteers and board members. He said he aims to expand the six-person board of directors, adding individuals from the arts community and with business experience, as well as, hopefully, some younger people, with an eye toward attracting younger audiences to shows.

Looking back, Mr. Newell recalls an early event at the Music Hall on Maple Street, when Mercedes Ellington read a poem written by her father, Duke Ellington, for the 75th anniversary of the Emancipation Proclamation, which she said hadn’t been read in public for another 75 years.

“Unbelievable,” Mr. Newell marvels now. “So, for Martin Barre to come here, and connect, and come again, it’s really outa-sight — but it’s been happening like that all along. There’s something in the water.” 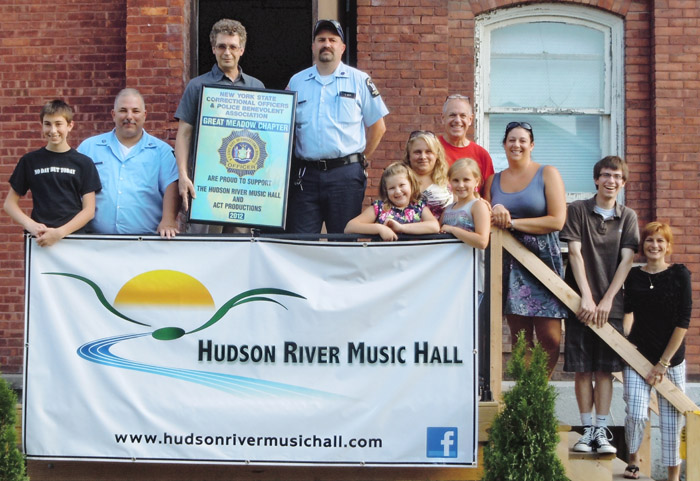 The former Hudson River Music Hall building on Maple Street in Hudson Falls is under contract to be sold.

The closing date is not set, but Realtor Joanne Davidson said she expects it will be before Christmas.

The building is owned by the entity that revived and operates the Strand Theatre.

Strand Theatre executive director Jonathan Newell said selling the Maple Street building will mean no more mortgage payments on it, “with hopefully a little money left over for us to start Phase 2 at the Strand.”

Here’s some of what’s on tap at the Strand Theatre in December.

• Movie Night: ‘A Christmas Story,’ Friday, Dec. 6, at 7 p.m. “Based on the humorous writings of author Jean Shepherd, this beloved holiday movie follows the wintry exploits of youngster Ralphie Parker (Peter Billingsley), who spends most of his time dodging a bully and dreaming of his ideal Christmas gift, a ‘Red Ryder air rifle.’” It’s free.

• Ballet Meets The Beatles, Saturday, Dec. 7, at 7:30 p.m. Chevalier Ballet dances to the music of the Beatles, performed by Beatles tribute band Across The Pond with the Strand Theatre String Quartet. $12, $10 seniors, $5 students, 12 and under free.

• Tony Levin and The Levin Brothers Band, Sunday, Dec. 8, at 3 p.m. For 40-plus years, Pete and Tony Levin have performed and recorded with some of the biggest names in jazz and rock, says The Strand, “but Levin Brothers is their first-ever co-led album. They had one shared goal in mind for the recording; to recreate ‘cool jazz’ in the mold of their heroes, Oscar Pettiford, Julius Watkins and Miles Davis.” $25

Info: 832-3484;t www.mystrandtheatre.org or on the Strand Theatre Facebook.

Film of DeSare concert to debut at Strand, 12/29

A movie has been made of the Tony DeSare-Tedd Firth concerts that drew two sold-out houses and officially opened Hudson Falls’s Strand Theatre in October.

The singer-pianist Mr. DeSare tells fans in his Winter 2019 newsletter:

“The biggest career and personal highlight from this fall was returning to my hometown of Hudson Falls, NY and performing for the grand opening of the Strand Theater.

“The show was a big band show and it was recorded! I’ll be putting out the full concert sometime after the premiere of the concert film at the Strand Theater on December 29!

“Until then, I’ll release a few teaser videos. See ‘You Make Me Feel So Young’ below and also ‘Fly Me to the Moon,’ which has not been released yet but I’m giving you the link to watch it now!”

Share
Previous Our December 5 issue
Next Neal Orsini: Why I resigned from Ft. Edward town board