Her quest to see California condors in the Grand Canyon

By Joyce Miller, Special to The Chronicle

Editor’s note: Joyce Miller, Professor of Library Science at SUNY Adirondack, was a founding staff member of The Chronicle in 1980 and was our first Arts Editor, among many responsibilities here over many years. She’s an ardent bird-watcher.

California Condors are the largest land bird in North America, with a wingspan of 9.5 feet and a height of about 3.5 feet.

I yearned to see this huge animal, especially after we missed spotting its cousin, the Andean Condor, on a birding trip to Peru last summer.

So, I signed up for a trip to Northern Arizona and the Grand Canyon with the birding group Field Guides, Inc. Our trip was led by professional birder John Coons, who lives in nearby Flagstaff. 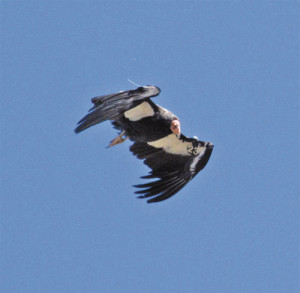 The condor’s wingspan is a massive nine-and-a-half feet. The California Condor is rare but is making a comeback. Photo/William Gruenbaum

They’d seen condors on several past trips. I was optimistic, but nothing is guaranteed in the sport of birding.

Only 22 California Condors existed in the early 1980s. All were captured by 1987 to start a breeding program. Captive-bred birds were released starting in 1992.

According to the U.S. National Park Service, 425 California Condors now exist: 206 in captivity and 219 in the wild (74 in Arizona and Utah, 116 in California, 29 in Baja California, Mexico). Condors are still pretty rare, and the Grand Canyon is vast.

We arrived at an overlook near the Bright Angel Trail at about 8 a.m. John directed us to start scanning the rim, the many cliff faces, the thousands of trees and rocks for the immense bird. 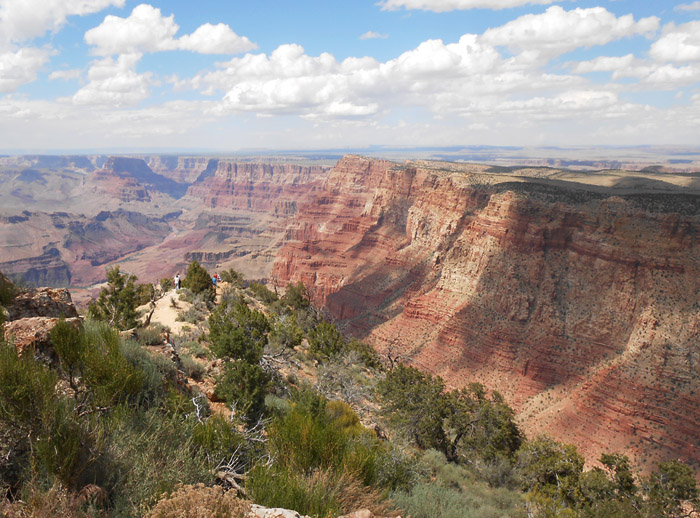 At 9:30 a.m., we spotted two Turkey Vultures circling upwards on thermals of warm air — a good sign that activity may pick up!

As we peered at the vultures, a much, much larger dark bird with long flat wings flew below us in the canyon, circling around a rock outcropping and out of sight.

A condor!! We high-fived in triumph — it was a life species for all of us. For one older birder in our group, this was his sixth attempt to see a condor at the Grand Canyon, so he was especially thrilled.

As we watched that outcropping for any signs of movement, a massive dark shadow glided over our heads.

We snapped our binoculars skyward — it was another condor, maybe 10 feet above us. This condor swung in lingering figure-eights over our group for several minutes. 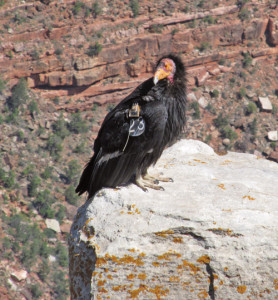 Not the most beautiful bird. The bald head makes it easier for the condor to clean off after dining on animal carcasses. Fragments of ammunition in animals that have been shot make lead poisoning a serious peril for condors. Photo/William Gruenbaum

We had time to examine its long white triangular underwing markings, diagnostic of an adult bird. We grinned at each other with incredulity at the prolonged airshow. This couldn’t get any better!

And then it did.

The condor drifted over to a tall rock spire about 40 feet from us and settled down comfortably, tucking in its wings.

It perched on the rock for about 10 or 15 minutes, turning its head, gazing at us occasionally. We enjoyed prolonged, clear looks at its long gray toes, bulbous pinkish-yellow head, glossy black feathers with a black fluffy neck ruff, droopy bill and huge size.

We zoomed in our cameras for close-up portraits of the bird. I snapped a selfie with the condor. (That’s something I never thought I’d say.) Non-birders gathered too, mesmerized by the colossal animal.

After we were sated by the superb views, the condor lifted off the rock spire and sailed toward a cliff face.

A few minutes later, two more condors wafted by below us, disappearing around the same rock outcropping as the first one. As we drove out of the parking lot a while later, two condors coasted by at rim level.

Most condors have wing tags, enabling researchers to track them more easily.

This cooperative condor clearly showed us the number 23. According to the U.S. National Park Service’s Condor Tag Chart and Tables chart, this indicated Condor #123, a 19-year-old male who was hatched at the Los Angeles Zoo.

Half of all condors die from lead poisoning, that chart reported. Condors ingest small fragments of lead ammunition as they scavenge carcasses of mule deer, elk and other animals.

According to the All About Birds website from the Cornell Lab of Ornithology, California Condors have a very slow reproduction rate: perhaps one egg every other year. 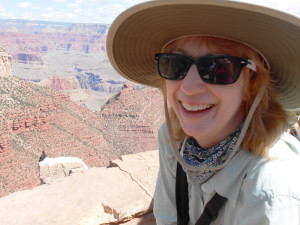 Selfie with condor. Joyce Miller at right, condor on the rock at left.

The naked head makes it easier to clean up after eating.

During the week, we also visited the snow-capped San Francisco Peaks, red-rocked Sedona and the high-altitude and tick-free Flagstaff area.

I saw a total of 130 bird species. Several were new, bringing my life list to 2,192 bird species on six continents.

But this close encounter with a condor will be tough to top.