Hawaiian-born Kaena to revive her dance show on Aug. 24 at Wood Theater

Kaena Peterson, the native Hawaiian who became a Lake George sensation dancing the hula at the Tahitian Lounge at Charley Wood’s Tiki Motor Inn in the 1970s, is taking to the stage again.

“I’m so excited at putting the show together. It’s close to a two-hour show,” Kaena told The Chronicle Monday.

“The theme is the Hawaiian odyssey” — referring both to “myself and Hawaii.”

“The dances that I’m doing are all Hawaiian music. Most of them will be in English.” She said, “I’m going to take people on a short journey on what Hawaii is today.” 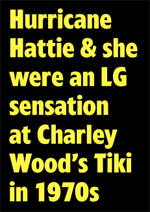 Joining her, Kaena said, are “two gentlemen in from Hawaii” — Joe Camocho, a musician/songwriter, and Kumu Hoku “master of the hula dance and chanting.”

Kaena says she met Charley Wood and his late wife Margaret in 1969 when they vacationed in Hawaii. Kaena was home visiting her parents, but she was already living in New York City, since 1961.

Charley brought her to Lake George.

The Tahitian Lounge at his Tiki in its heyday was a raucous night club. “I will never have as much fun as I did at the Tiki,” Charley Wood wrote to Kaena in 1991, “for the enjoyment I derived from the shows that you and [Hurricane] Hattie performed at the famous Tahitian Lounge.”

“That was a different Lake George,” she says. “It was so packed.”

The village buzzed at night with Mr. Wood’s Gaslight Village and his Tiki, and bars and nightspots dominated.

Kaena put local roots down and pursued serious purpose. “I bought a house in 1970. I looked in Fort Edward and Ballston Spa.” She said she loved a house in Ballston Spa — “with fireplaces on all three floors. It was just beautiful” — but the price was $25,000.

Warrensburg was affordable. It “had hit rock bottom,” says Kaena. She said Delbert Pasco showed her “a nice Victorian house right by the river” and offered to “sell me three houses [the Victorian and two others] for $3,500.”

Kaena said she countered, offering to buy the Victorian and one of the others for $2,500. Mr. Pasco accepted.

Kaena became a significant contributor in Warrensburg. She became friends with the active Jane LeCount and helped found and operate Warrensburgh Beautification. “I was the president for 25 years.”

They created a riverside park near Curtis Lumber, launched the farmers market there, and won National Register listing for a Warrensburgh historic district.

“The rewards are today,” Kaena says. “It’s a beautiful park.” She says that with Warrensburgh Beautification “we hoped people would take care of their own places and it happened….The biggest thing was having an Historic District which was real-ly an achievement.” 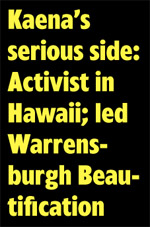 Activist on island of Hawaii

On the island of Hawaii, Kaena is very active in preservation and native rights issue. She is the president of the South Kahola Hawaiian Civic Club.

“Civic Clubs are a very, very important entity in Hawaii politics,” she says.

But if you count the part of the mountain beneath the sea, it’s Earth’s tallest.

Real estate on Hawaii is in billion dollar demand, says Kaena, and she has been involved in trying to maintain public access, respect sacred sites and keep an ancient trail from being developed into a highway.

A fight raging right now is over the $1.4-billion plan to erect the 18-story tall, world’s most powerful Thirty Meter Telescope at the top of the mountain.

Hawaiians are divided about the project.

“We are fighting not to have it,” says Kaena. “It will look like a cyclops” on the mountain, she says. And she fears water and mercury pollution. “This is where a lot of our water comes from,” she says. “The mountain is snow covered in winter.”

Kaena talks readily and in detail about the serious issues and history of Hawaii.

How much will she get into it at her show on Aug. 24? Some of what she’ll touch on “are issues that are happening now,” she says. “But it’s going to be an ‘up’ and letting people know about what Hawaii is today.”