Hadley Mountain won’t have a steward, after cabin break-in

Every summer the Hadley Mountain Fire Tower Committee hires a Summit Steward to assist and educate hikers on Hadley Mountain in Saratoga County, but vandalism this spring at the observer’s cabin near the summit has interrupted the program this year, committee chair Linda Ranado tells The Chronicle.

She said that as many as 20,000 hikers per year make the 1.8-mile trek to the fire tower atop the mountain, and that the committee had hired a Paul Smith’s College student to be this year’s Summit Steward.

He planned to stay in the observer’s cabin and had started moving his things in.

What happened next isn’t entirely clear, said Ms. Ranado, but apparently the student returned the next day to find a broken window and evidence the cabin had been broken into.

She said a new cot provided by the state Department of Environmental Conservation was taken, but the student reported none of his belongings were gone, although they appeared to have been rifled through.

She said the student understandably became nervous about staying there, and resigned.

Ms. Ranado said she, committee member Dave Cox and local DEC personnel went up the mountain to assess the situation and clean up the cabin. She said the plan at this point is to continue the steward program, but not have the steward stay on the mountain overnight, at least for this summer.

As of June 16, Ms. Ranado said she had a couple of possible candidates in mind for the job.

She said the person or persons who committed the vandalism remain unknown, but that DEC was investigating.

Ms. Ranado said that after the incident the committee received “an outpouring of support” on Facebook, including from previous Summit Stewards.

She said there has been vandalism at the cabin before. Last year, the cabin’s new windows were defaced, but the perpetrators were caught and had to pay $300 fines, she said. There was also a minor incident in 2004, and a more serious incident over the winter in 2011 in which windows were broken and beer cans were left behind.

Originally, the committee advertised to the general public to find a steward. Then for several years they were able to get students from SUNY Potsdam in forestry or similar programs, who received college credit for the experience as an internship.Last year’s steward was from Paul Smith’s.

The Hadley Mountain fire tower was built in 1917, “and it actually remained active until 1990,” Ms. Ranado said, adding that it remained open longer than most in New York because of its popularity.

The Hadley Mountain Fire Tower Committee “first got together in 1995,” said Ms. Ranado, a member for 15 years. 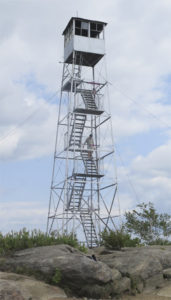 “There was a group of local people who wanted to make sure it [the fire tower] was preserved,” and they were able to get some funding and put together a five-year restoration plan.

Two founding members, Jack Freeman and Linda Champagne, “have been there right from the beginning” and remain involved.

Share
Previous Swam length of Lake George
Next Rock on!, this grad speaker may tell kids