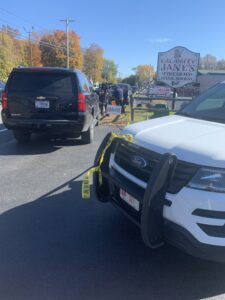 A break-in early this morning resulted in the theft of handguns from Calamity Jane’s gun shop on Dix Avenue in Hudson Falls.
Harold Spiezio, Senior Investigator for the Washington County Sheriff’s Office, said on the scene shortly before noon, that the theft involved “mostly handguns…possibly all handguns.
“They forcibly broke into some cabinetry to remove guns,” he said. “It appears it was targeted.”
Investigator Spiezio said, “It appears to be two” perpetrators. He said “4:35 (a.m.) was the time of alarm.”
The store was equipped with video surveillance cameras. Investigator Spiezio would not comment on what if anything appears on videos made by the cameras.
Investigator Spiezio said that the Washington County Sheriff’s Office is handling the investigation. The New York State Police and federal Bureau of Alcohol, Tobacco and Firearms are also involved.
Is there danger to the public, asked a reporter for NewsChannel 13?
“Any guns in the wrong hands are obviously concerning,” said Investigator Spiezio.
Share
Previous GF Habitat plans 25-unit Qby. condo; thought to be a world first
Next Our October 27 front page 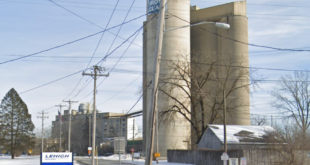 Glens Falls Lehigh Cement plant to shut down in 2023

Lehigh Hanson, Inc. announced today “that it has made the difficult decision to halt cement …