Greg Norman thinks Tupper Lake has limitless marketing potential. “Tupper Lake has a phenomenal story to tell, considering the history and its location,” Mr. Norman said in an exclusive interview with The Chronicle.

“And I think that story can be put on a giant soap box, a soap box as big as you really want it to be.

“And when you look out and see potentially the Winter Olympics coming back there in the mid-2020s, the resurgence with what is happening with tourism in that area…there’s a lot of positive signs for it.

“And on top of all that, it appeals to me because it’s the United States and it’s New York and it’s upstate New York.

“I’m more of a global player, and when I have a chance to get my foot in the door in the United States, it’s a great compelling story. 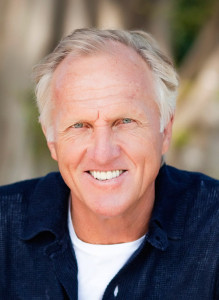 “I’m looking down now in the Southeast, and we’ll hopefully do some projects down here. You’re looking at the same market.

“People up in the Northeast move to the Southeast in the winter, so you can tell a pretty good story going from one place to another.”

Speaking by phone with The Chronicle, Mr. Norman talked about how his involvement came about with the Adirondack Club and Resort in Tupper Lake, and what his future role will be.

If fully developed, the $500-million, 6,300-acre project will include 650 homes and condos, a hotel, golf course, spa, marina and equestrian center.

The former #1 golfer in the world now heads up Great White Shark Enterprises, a multi-national company based in West Palm Beach, Florida. He will partially redesign the existing Donald Ross golf course there, and perhaps expand it.

He said he plans to build a home in Tupper Lake. “Yeah, we have discussed that,” he said. “We’ve got a site allocated. I was trying to get up there a couple of weeks ago, but I got swamped with the schedule and had to pull out of that. But yes, we are.”

Is the Australian a partner in the Adirondack Club and Resort project?

“No, we’re not going to be called a partner,” Mr. Norman said. “I think we’re more of a, I’d say — branding it, bringing my brand in and bringing my expertise and my marketing in.

“I have my vision and what we see, especially from a marketing standpoint.

How much time will he spend in Tupper Lake? “Probably quite a bit. Just on the golf course alone we will be there quite a few times. And then everything else, marketing, what we need to do.

“The thing is…when your name is on the door and your name is involved, you do have to be there to some extent. It’s not like you’re not going to show up. The fact is people want to hear you and people want to see you, so the answer to that is, yes, I will be there.”

As for the golf course, “We’ll probably redesign it, reroute it, bring the old original golf course back to shape. We’re not going to change that historic golf course…We’ll probably add another nine, and maybe another 12. We’re discussing that right now and I think the market could sustain that for sure, especially with everything else that would be added within the area…

“It’s really an all-encompassing opportunity, not only for my company but for Tom to realize the dream that began many, many years ago.”

“… I love the year-round facilities that it offers for everybody, and I love the reach with Canadians, from Toronto to Montreal to New York City to Philly. That Northeast is loaded up. Given the repositioning and rebranding of it, to some degree, I think it will be a home run for everybody.”

The project won approvals from New York State and the Adirondack Park Agency, but environmental groups Protect the Adirondacks and the Sierra Club fought it long and hard, including several lawsuits.

Last December, New York’s highest court, the Court of Appeals, dismissed the final motion to appeal, clearing the way for the resort to be built.

Construction is expected to happen over several years. The golf course is scheduled to re-open in 2018.