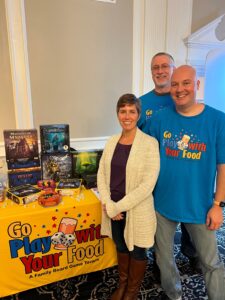 Breaking news! A board game tavern will open in downtown Glens Falls.

‘Go Play With Your Food’ — which calls itself ‘A Family Board Game Tavern’ — is the brainchild of husband and wife Mark and Kristen Shaw. It plans to open in January in the first floor of 126 Glen Street in downtown Glens Falls.

Mr. Shaw is the co-founder of StoredTech. He said a group of friends; Charles Ives, Kevin Malinoski, Angela Sweet, Jason Westcoat are also owners of the tavern.

Mr. Shaw told The Chronicle that they’ll have over 600 board games for visitors to play, beer on tap, and “affordable” food.

“Glens Falls needs something to do,” Mr. Shaw said.

He said he hopes to provide a fun space for families and all ages downtown. “Put down the electronics, it’s not just food and drink, it’s something to do.”

“Plenty of time we’re stuck indoors, how do you get people out? Play a board game,” he added.

Mr. Shaw told The Chronicle that Elizabeth Miller, who bought the building in August, is renovating the first floor. “The very day after she closed I was over there looking at the space,” he said.

He said they intend to be open 7 days. For $10, guests can have a table for the day — he expects tables to turn over 2 or 3 times.