I attended Monday night’s public presentation at the Park Theater in which Mayor Bill Collins and cohorts unveiled their long-awaited South Street plan to spend much of the $10-million competitive Downtown Redevelopment Grant that Glens Falls won in 2016 from the State of New York.

Earlier in the day they also did a presentation at Crandall Public Library.

Mayor Collins, the city’s Development Director Jeff Flagg and the selected developer Sonny Bonacio of Saratoga Springs and others all spoke.

They aim to break ground this fall on Phase 1 of the project — a Market Building that the Farmers Market will move into and redevelopment for mixed use of the former Sandy’s Clam Bar, Hot Shots and so-called “incubator building.” 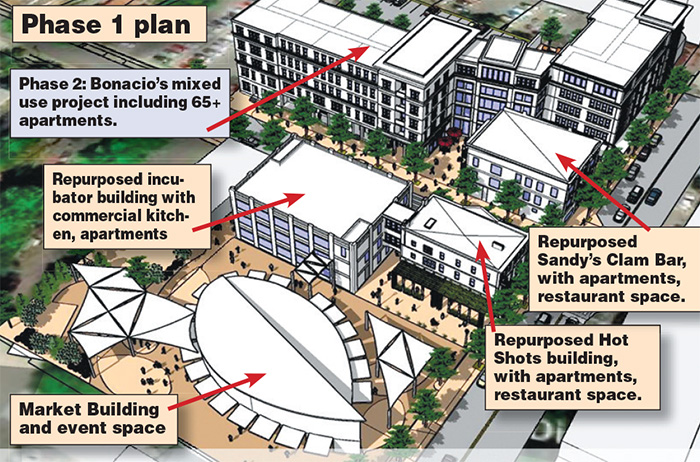 Mayor Collins, reading from prepared text accompanied by images shown on screen, cited in detail the many projects — restaurants, other businesses, building renovations and expansions — that downtown has seen in recent years.

The city will build the market building. Mr. Bonacio will do the other three Phase 1 buildings. He also is pursuing Phase 2, a 5-story mixed use complex with 68 apartments where the current farmers market and parking are now.

Optimism among the speakers was abundant, but some members of the public voiced questions, doubts and outright objections, during and after the meeting.

The head of the Farmers Market said he was shocked to see that their market space has been cut from 10,000 to 5,000 square feet. Mayor Collins defended the plan, said he was eager for the farmers market to capitalize on it, but added that he couldn’t give sole priority to a user of the space for four hours a week.

Questions were raised about vehicle access to the building and feasibility of its use in colder weather.

An audience member urged solar collectors on the flat rooftops and more environmental emphasis all the way around. The developers said it is an emphasis and that the construction industry as a whole has shifted that way. What was once unique in LEED-certified buildings, they said, is now standard procedure.

After the meeting, businessman George Normandin was pushing a drastic rethinking that would move the farmers market to the first floor commercial space in 14 Hudson that has never found a tenant.

Also offering a drastic rethinking was Ed Moore, the owner of the currently expanding Queensbury Hotel, who spoke in conversation after the evening meeting.

“Keep the farmers market where it is,” he urged. He said he can accept the plans for the former Sandy’s Clam Bar, Hot Shots and business incubator buildings, but he strongly urged that Mr. Bonacio’s planned Phase 2 five-story mixed use apartment building should instead go to the vacant former OTB lot where Glens Falls wants to build its Market Center.

Mr. Moore acknowledged that he’s been told it’s impossible to change direction now and that the state agencies whose approval is needed are set on this plan.

Mr. Moore hasn’t given up.

He admits it drew a lot of opposition, that he has backed off, and that now the city will take a fresh look and has commissioned a comprehensive study of the parking throughout the downtown.

Mr. Bonacio touted to the crowd the possibility of there being a year-round food market on the first floor of the former incubator building on Elm Street.

The Chronicle approached him after the meeting and asked if that is possible given that Price Chopper just closed its market launched in a building developed in recent years in Saratoga Springs.

Mr. Bonacio asked if The Chronicle realized he has purchased that building and said that he will have a major announcement in two weeks that he seemed to indicate will have a food thrust.

Glens Falls Development Director Jeff Flagg, in reference to parking, said the city has money to install street sensors that will identify available parking spaces people can find through a phone app. It can also track how long a car is parked. 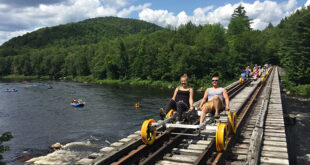