By Cathy DeDe, Chronicle Managing Editor
Amid the coronavirus pandemic, a Glens Falls family is dealing …

Amid the coronavirus pandemic, a Glens Falls family is dealing with the equally frightening specter of childhood cancer. 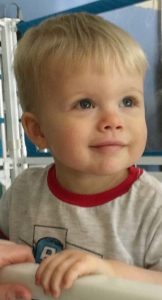 George Hall, the 23-month-old son of Kevin and Sarah Hall, was diagnosed with leukemia last month.

He started his first round of chemotherapy at Albany Medical Center two weeks ago — and is doing “really well, as good as anybody can ask him to,” says Sarah.

Sarah and Kevin are core Glens Falls. Kevin’s father Dan Hall is the city’s mayor. Kevin runs Hallwear, the business founded by Dan, which is shut down now as a non-essential business.

“I always knew, but now more than ever, this is the greatest little city in the world,” says Sarah. “We were completely humbled by the response we got.”

Speaking by phone from Albany, she said, “Kevin and I have both lived in Glens Falls our entire lives, and we plan to be there forever. We’re so lucky. Everybody’s thoughts and well wishes are always accepted. The love in our community is why we stay. We are so glad we planted our roots here.”

Her brother Nick, Jr., set up the Go Fund Me, “being the financial planner that he is,” she laughs. “A lot of people were reaching out from left and right, wanting to help.” This was a way to make it easy, without anyone duplicating efforts, she said.

Onset of the leukemia

George turns two years old on June 11, Sarah says, “He had been to all his well child visits and was on track. He had mild anemia they were watching, but it seems to be unrelated. Based on the tests so far, the leukemia is just — a thing.”

She recalls, “On April 20 we went to the doctor. It had been about a week and he was being kind of whiny, slowly getting more lethargic, only wanting to cuddle and sleep, and he had a low grade fever.

“He stopped wanting to eat We thought, Oh gosh, could this be COVID?’ So we were in close communication with the doctor. April 20, we brought him in and they gave him a hemoglobin test. 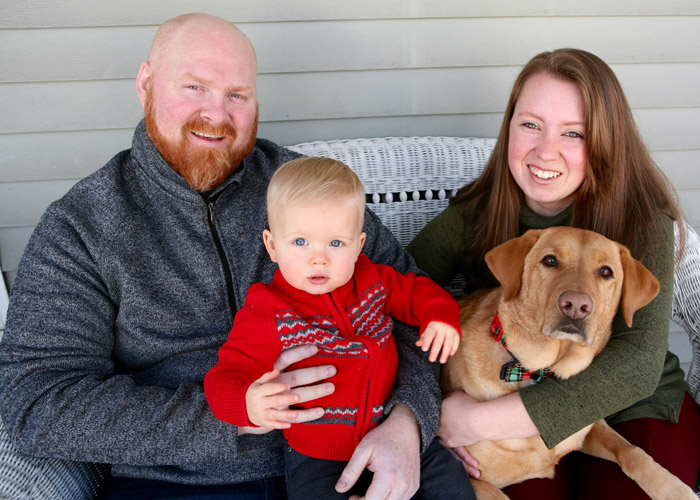 “It was dangerously low. They sent us to the Albany Med Emergency Room right away, then the Pediatric Intensive Care Unit. Then he was put in the pediatric wing when he was diagnosed.”

All this occurred over about a week.

Sarah says, “Both Kevin and I had been social distancing, Face Timing with family and friends. They noticed that George was looking a little pale. We thought it was because we were staying inside a lot. In retrospect, you start to see little signs.

“A few days before Albany Med, we started to think that something might be wrong. I remember thinking, ‘I hope it’s not something like cancer.’ Kevin said the same thing. It’s a little bit of mother’s and father’s intuition….

“We learned, when the hemoglobin levels are going down, the body adjusts gradually. Normal is in the 10 to 11 range. It gets to 9 or 10 and the body adjusts. But then it goes so low and it can’t.

“That afternoon when he was tested at the doctor’s it was 3.5, and when we got to the ER it was 2.5. They spent a couple of days trying out different diagnoses, but pretty much from the get go they suspected it was leukemia. He started treatments, chemotherapy and he’s responding really well.” She said Monday was Day 10 of the first chemo treatment.

George has had numerous blood and platelet transfusions. With treatment, Sarah said she has learned, “eventually all his numbers will get low. Basically the chemo wipes out everything good and bad, and then you hope the body will start to recover, producing healthy cells.”

Chemotherapy is followed by three weeks in the hospital, then about a week home, for at least three rounds, she said. “So we are looking at being in and out of Albany Med until September or October, best case scenario.”

How they’re doing in Albany

Sarah says George is doing “so great. The nurses call him ‘The Boy Living His Best Life’ because he’s having such fun with them. The doctors have been very positive and optimistic. We are trying to be troupers, just like him.”

Amid COVID-19 precautions, Sarah and Kevin are the only family members allowed at the hospital. They are screened repeatedly for temperature and health. Their son, now immune-compromised, is not to leave the room at all.

The Ronald McDonald House that normally houses out of town families of patients in Albany for such treatments is closed due to coronavirus precautions, except for families already staying there when the pandemic hit, Sarah said.

She said that she and Kevin are staying at a hotel in Albany, and the Ronald McDonald House is helping with the cost.

“They’ve been great, and everyone at Albany Med is fantastic,” Sarah adds, “and our doctors, everyone at Hudson Headwaters acted quickly to help us.”

“This is still the initial stages,” Sarah realizes. “A lot of the stuff kids with cancer face are still out on the far horizon, like long term effects or outpatient care.”

Still, her message is, “We feel so lucky. We are so unbelievably thankful for everyone’s support. We feel very, very lucky.”