“This is history. It’s exciting. I’m honored to be a part of that,” says Hannah Williams (@hannwilliamsart) regarding her mural taking shape on Warren Street. “I’m so passionate about public art…advocating on how much it can bring value…business and tourism,” she says.

Miss Williams’s work is one of two commissioned murals being paid for out of the city’s $10-million Downtown Revitalization Grant from New York State.

She says the opportunity means “absolutely everything” to her. She “graduated in Queensbury in 2011, went to SUNY Adirondack from 11 to 13,” and has lived in Glens Falls.

She acknowledges that not everybody is as thrilled about the murals as she is.

But, “overall it’s been nothing but positive,” she says. The murals are “needed,” says Miss Williams. “We need color, we need more culture.”

“I get sad when I see all these empty commercial spaces, and I think they’ll be filled over time, maybe within the next 10 years, just because of putting some art on the building.”

Since Miss Williams was selected for the project, she’s made many revisions to her mural design.

“I got approved for a whole other design — just huge native flowers.”

It was her plan “because people usually connect more with nature,” and “I find more positive feedback,” she says.

“Since January, almost until June,” she was “collaborating with the building owners.” She says, “You have to make” them “happy too…They wanted…more of a combination of things.”

“I got together with them, and we figured it out.”

She says the process was “pretty cool.”

She told the owners to “shoot off a list of things you love,” and together they “narrowed it down to what the three of us love the most.”

Next, Miss Williams says, she asked, “What do you love in nature…And so they gave me a huge list of insects and animals, and I narrowed it down.”

One last revision, she says, laughing: “I was originally going to have a fox head instead of a bear, but then I found out that Jesse [Melanson, doing the DRI mural across the street on the Domino’s Pizza building] had a fox, so I had to change my design yet again.”

The mural is on the side of the Goosehead Insurance building at 20 Warren St.

Mr. Melanson (jmelart.com) lives in Truckee, California and says he “grew up in Maine. But “my mom’s side of the family’s from Latham” and the family owned “a condo on Lake George. In the summertime, we would come up to the lake.”

“We sold it…a long time ago, and I haven’t been back in the area for probably 23 years,” he says.

Mr. Melanson says that coming back was one of reasons he wanted to pursue the project. He learned of the opportunity via an Instagram follower “that I met when painting a mural in Reno.”

“She saw it on a Facebook group and then forwarded it to me.”

He says he thought “this would be cool if I had the chance to come to the area.”

“Then I saw the wall, and was like, wow, this is really big. It’d be really cool to paint this big,” he says.

It’s the side of the Domino’s Pizza building at 144 Glen Street, on the Hudson Avenue side.

Of his mural design, Mr. Melanson says there’s “a whole ecosystem on this wall of praying mantises, grasshoppers and monarch butterflies. And they’re all really cool, especially the praying mantis.”

He has similar thoughts to Miss Williams regarding the prospective impact of the murals on Glens Falls. “I think it’s going to help the whole city grow substantially into the next phase,” he said. “It’s time to grow up, and that’s what Glens Falls is doing.”

He calls the project “progressive and cool, and Glens Falls should be proud to be supporting the arts in this way.”

He says, “Thanks for having me. Thanks for inviting me down and letting me do my thing.

Mr. Melanson said he has painted murals “from coast to coast.”

Asked what has made painting a mural in Glens Falls unique, he says, “I like the old architecture.”

Also, “this is definitely the most active, as far as traffic going by both foot and car traffic.

“Everyone’s been super kind and supportive — yelling and honking. And I think that’s, like, really awesome. This is by far the most people I’ve had watching me paint all day, and it feels good when people are telling you, you’re doing something cool, it’s making them happy.”

“That’s the whole point,” he said.

“Now we’re all giving each other high fives.”

“The original artwork,” said Jesse Melanson, had a “50 foot moose,” which he said he was excited to paint because he thought “it would look really cool.” He said he was asked to “switch up the content,” which resulted in the Hot Air Balloon Festival design.

“In the end,” Mr. Melanson said, “it’s not just about me, it’s about the community…I’m just here to translate the ideas into a vision.” 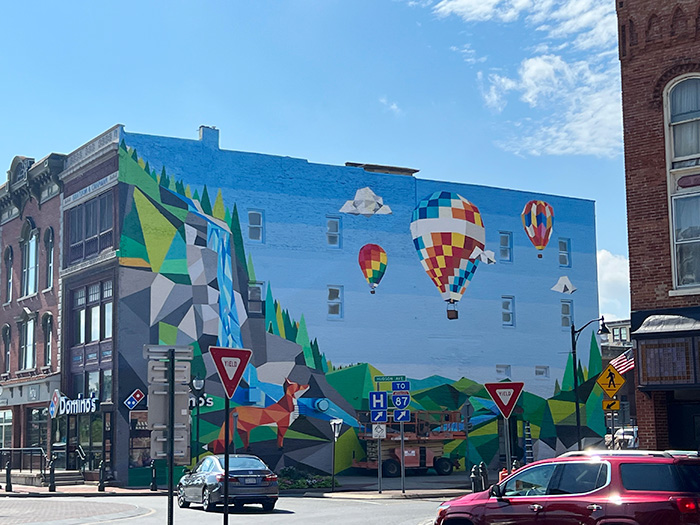 Glens Falls artist Esmond Lyons, commissioned by building owner Eric Unkauf to paint a mural on Maple Street, declined to be interviewed by the Chronicle.

The mural draws on the Hyde Collection’s Rembrandt work, “Christ with Folded Arms.”

Mr. Lyons told The Chronicle his mural is “entirely funded by Eric Unkauf and myself. No public funds are being used…He has invested a small fortune into repairing that wall.”

Mr. Lyons said, “The so-called arts organization that received $84k in public funding has nothing at all to do with this project…Despite numerous inquiries from me they have not responded at all. In the spring I gave them a half dozen proposals as per their guidelines and they never even had the courtesy to answer.”

“Thank you for the opportunity to talk about my work,” Mr. Lyons said. “That’s all I have to say at this time.”
— Sophia Afsar-Keshmiri 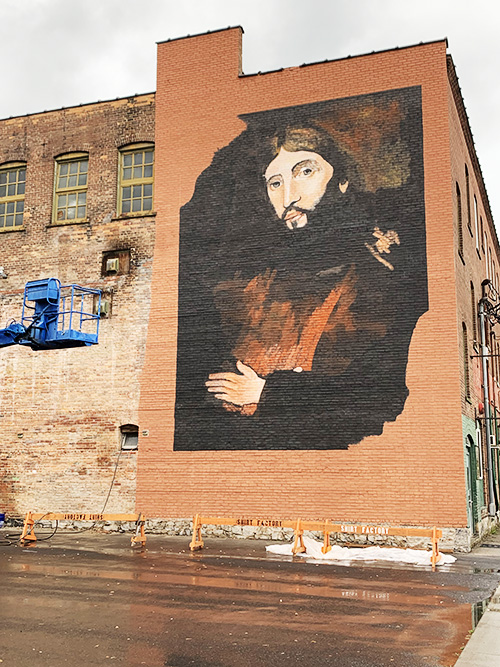 Mural planned, side of the Wood Theater

side of the Wood Theater. She said it was originally planned for the Apostolic Christian Fellowship on Warren Street, but that building falls outside the DRI zone.

The Arts District hopes still to fund that one separately.

Proposals for a Wood Theater mural were due by August 26.

Ms. Austin said they hope to have that one completed “by the end of this year,” before it’s too cold to paint.

Ms. Austin says that murals are the property of the building owner, but there’s an understanding that they will be maintained by the Arts District at least for the next five years.