Things are getting more — heated? interesting? — than usual for this year’s fourth annual Conductor Contest by the Glens Falls Symphony Orchestra, in anticipation of the annual Holiday Concert coming on Sunday, Dec. 4 (at 4 p.m. at the Glens Falls High School; details below).

The winner gets to conduct the orchestra members in their traditional performance of the Leroy Anderson classic “Sleigh Ride” on Sunday.

Mr. Rabinovitz is the rabble-rouser of the group.

He’s trash-talking the opposition on Facebook, created a separate Website touting himself as “America’s Conductor,” hash-tagging a campaign to “Bach the Vote.”

He’s got tongue-in-cheek letters of endorsement from actual musicians, old college friends, and something maybe not quite honest from The Beatles, who say “he wrote all our songs.” 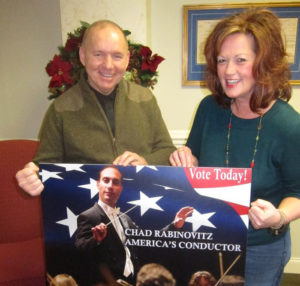 Brian Petrovek of the Adirondack Thunder hockey team and Tori Riley of the Adirondack Regional Chamber of Commerce — competitors for the Glens Falls Symphony’s conductor contest — do their best to put fierce faces on the contest. Fellow conductor candidate Chad Rabinovitz couldn’t be there for the picture, though he’s the one who first threw threw down the gauntlet. Brian and Tori hold a stand-up foamboard poster Chad created to drum up votes. Chronicle photo/Cathy DeDe

He’s Photoshopped himself into the conductor’s tux in several subversively funny orchestra shots. He’s accused Mr. Petrovek of impaling famed cellist Yo Yo Ma in the head with a hockey stick in a supposed Adirondack Thunder promo event gone awry.

“It is completely out of control this year,” laughs Symphony executive director Jennifer Brink. She adds that the upshot is also an uptick both in donation/votes, awareness of the concert and ticket sales.

“It looks like we’ll have more people at the concert than last year,” Ms. Brink said, depending on the weather. “We probably won’t sell out but it will be a lot of people.”

Meanwhile, she said, the competition is still on, as most of the conductor vote/donations typically occur during the concert itself. Results are tallied after a final push at intermission, and the winner is announced just before Sleigh Ride is to be played during the concert’s second half.

Ms. Brink said they’re seeing ticket sales and donations from Denver, Maine, around the country — family members of Mr. Petrovek, for one thing, and friends of Mr. Rabinovitz.

Mr. Rabinovitz is in the lead, for now, His competitors say they are fine with that.

“It’s really all about the people,” he says. He’s taking a more understated approach to the “ask,” he adds. “I try to be sensitive and appropriate,” he said — not wanting to push too hard on the hockey community, so far — “But stay tuned,” he adds.

“It’s been fun and brought great awareness of the symphony,” Mr. Petrovek adds. His wife, Sara, is an 11-year member of the Symphony Board in Portland, Maine, where they lived before coming here with the Calgary hockey teams. She volunteers with the Glens Falls Symphony as well.

“You have a real cast of characters, with Chad,” Ms. Riley says. “I’m also trying to be sensitive about asking. It’s not really like me. We have a lot of members and I don’t want to push, but the Chamber is also so supportive of the creative economy. Seeing the grassroots efforts that are starting here, and then seeing how they just explode is great.

“When Alan (Redeker, of the Symphony Board) asked me to do this, it was a no-brainer.” She confesses later that she’d be just as happy not to have to hold up the baton when the time comes.

“It’s not really a matter of who wins,” Mr. Petrovek adds. “We’re really glad to be part of this,” he says of the Thunder hockey team. “It recognizes that we are a player in the community’s entertainment sector. It’s about live performances. For a community this size to have the hockey, the symphony, it’s just incredible. It’s taking things forward, win, lose or draw.

“Less important is the fact that I’m losing,” he laughs.

“Chad is such an impressive character. I love the trash talking,” Ms. Riley adds.

A ‘no-show,’ Chad emails in

Mr. Rabinovitz was out of town for the conversation. ATF manager Bridget Dunigan stood in, offering, “Chad is always all about supporting not just ATF, but the community first. To add his competitive side onto this — it is a dream come true for him.”

Asked to comment by email, Mr. Rabinovitz wrote, “My thinking with the fund-raising is that when I commit I like to go all out. And I think what we all need right now is to go through another election process.

“By creating a full-on campaign, I thought I could bring the recognition to the great cause while also making it a whole lot more fun! Raising money for non-profits is never easy and is often painful, so I wanted to try and make it fun for everyone involved. And I’ve only just started. I have business cards now and the standee for the event.

He says, “Much like the shows at ATF that you can’t see anywhere else in the world, the symphony is part of what makes Glens Falls unique. I’m not just looking to grow ATF and the new film festival — I want to help our whole community to thrive. Well, at least the ones who vote for me.”

Mr. Rabinovitz digresses: “Also, I have it on good authority that Tori wants to build a wall around the musicians. Sure, she says it’s to help with the sound bouncing back to the audience, but what’s it really for, Tori? WHAT’S IT REALLY FOR?

“A vote for me is a vote against building the wall.”

The Glens Falls Symphony presents “A Season for Singing,” its 21st annual holiday concert, on Sunday, Dec. 4, at 4 p.m. at the Glens Falls High School on Quade Street.

On the program: “Music that conjures up images of snow-covered fields, families gathered around the hearth and all the good things that remind us of home.”

These include selections from Tchaikovsky’s The Nutcracker and Handel’s Messiah, Rimsky-Lorsakov’s Polonaise, Christmas songs from around the world, sing-along carols and more.

Featured again this year is the Symphony’s Children’s Chorus, conducted by Matt Gaulin.

Charles Peltz conducts the Symphony — until he gives over his baton to the winner of the guest conductor contest.