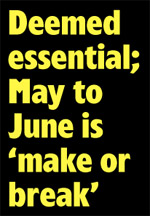 Like several other nursery-garden stores who responded to a Chronicle inquiry, Binley’s is upbeat even as Ms. Field said sales and walk-ins are down as the spring planting season arrives.

The businesses can be open amid the coronavirus “Pause” because New York State has deemed flower and garden shops agricultural entities, growing flowers, vegetables and other plants.

“Being outdoors is the best thing,” says Frank Troelstra, owner of Garden Time in Queensbury. “A lot of people are itching and ready to go.”

He says when he first heard Governor Cuomo’s plan to close non-essential businesses, he assumed it included his store. “I broke the news to my employees, at least on the retail end of things. A lot of tears were shed.”

Within a week, he learned that they were spared, “and it was — Glory, Hallelujah!”

Tim Watkins of Watkins Garden Center in Hudson Falls says, “No two years are alike, but this one is a doozy.

“We are open and planting as usual. Typically we use a credit line now for ordering. The question is, will the people come?” He says they do most of their business they do in May and June.

“We think vegetable gardens will be a bigger thing this year,” he says hopefully. “People don’t want to be caught without food. We are growing a few extra vegetable plants, just in case.”

Anecdotally, he says a seed broker who serves down in the Carolinas reported, garden center business there is “off the charts.” So, he says, “that’s a good sign.”

Steve Sorano at Sorano’s Greenhouses in Gansevoort doesn’t open until April 18, “but we are getting a lot of calls, so I am optimistic.”

He said, “We grow mainly for Mother’s Day, on. It hasn’t affected us. It’s our normal down time, and we always saved enough from last year to get through.”

“My Christmas is typically from the first of May to Father’s Day,” said Garden Time’s Mr. Troelstra. “If I don’t make it then I’m a hurting man. There’s an 8-10 week window where 50 percent of my business is done.”

He notes the national employment figure: “6.3 million out of work. If they don’t have money, they’re not thinking flowers.”

He also worries, “If I fall ill, what will happen to the business?”

But so far he’s been “pleasantly surprised” at business. “People want to get out and get their hands in the good-smelling dirt. A lot are buying pansies right now, the first flowers that show their happy faces.”

Ms. Field at Binley’s says, “Our business is definitely down. Pretty much everything in April is cancelled. It’s still early for weddings, so that’s good. Obviously, the (high school) proms being cancelled had an impact on us. It’s not big enough to declare a percentage of business, though.”

She said Palm Sunday and Easter typically are big sales moments, especially for church orders, which are mostly down except for a couple that are planning still to decorate for remote services.

“We’re operating on reduced hours,” Ms. Field says: “9 to 3, rather than a full day, Monday to Saturday, we’re not sure about Sunday.”

They’ve closed the retail store to walk-in sales, taking orders only for pickup and delivery not only for plants but for garden and planting supplies.

Ms. Field said, “We are encouraging credit card orders for delivery, over the phone,” Ms. Field said. “It’s all strictly no contact, we will drop it off, or leave it on a table here to pick up.”

Any problem getting flowers into those places? “They’ve been accepting our deliveries right along.”

Mr. Troelstra said Garden Time offers call-in, credit card orders with curbside pickup, “or we will put it right in your car, however you want.”

They offer delivery of bulk items such as topsoil and manure, as always. They can do delivery of flowers or other garden items, for a fee, but it’s not their focus.

Mr. Watkins, who is open year-round, said, so far, it’s “not a lot, but sales are okay. The people come in are doing good.”

Mr. Watkins said he is just starting to figure out delivery or pickup service. “I’m thinking of building a quick Website for orders.” He suggests people email for now, putting “ordering” in the subject line.

Mr. Watkins notes, “The scary part is the social distancing. So many people, maybe they’re thinking because this is out in the clear air, but they are still getting too close.”

He is especially concerned because he has a sick partner at home, “but I’ve got to be here.”

He said the doctor suggested, “Assume everyone has got it, but is asymptomatic.”

“My fear is, what if somebody here gets sick? Would everybody have to be quarantined? It’s a small staff,” of 10-12 people. “Even if we stopped planting, the plants here need to be watered every day, whether someone is sick or not.”

Mr. Sorano said his employees are working the greenhouses by themselves, in shifts.

Like the others, Binley’s is still planting in the greenhouse, but working with a reduced staff, about three or five people, Ms. Field said. “We’re plugging along.”

“Plants don’t know what a coronavirus is,” Mr. Troestra says. “They’re still growing. I have actually been trying to slow them down,” opening the greenhouses to cool the air, for example, trying to hold off until sales might pick up.

“Our retail hours are cut back about 20 percent, but we are 100 percent normal on the production side.”

Mr. Troelstra said he lost “tens of thousands, in the five figures each,” when the Capital District Flower & Garden Show and other large pre-season events they attend were cancelled. Their own 45th annual community open house was cancelled.

Mr. Troelstra said he was able to cut back their orders for Easter lilies and other flowers, “but a lot of lilies will go into compost this year.”

Gardenworks opts to delay opening; farmwork now; says fall is key for them

Chronicle managing editor Cathy DeDe writes: Meg Southerland, who runs Gardenworks Farm Store and You-Pick berry farm in Salem with her husband Rob, said they had expected to open for the season this weekend and had planned events “to create enthusiasm and get people to come,” but that is “all cancelled.”

“It’s disappointing, but not the end of the world for us,” she said. “We are taking it one week at a time.

“We are pruning the blueberries, working in the greenhouse, and doing the normal things, just not up to the public. But we are thankful to do the jobs that need to be done. We are starting tomatoes, geraniums and trying to stay on schedule.”

Observing fellow farmers facing market loss and other challenges, Mrs. Southerland said, “I marvel at the human ingenuity, and the way people keep changing their ideas to fit the circumstance.

“This would be much harder for us to have this in the fall. For us, spring is usually steady but demand increases as we get warmer.”

They decided not to open the shop in part because, “There’s so much risk. You don’t know where the virus is and it’s so hard to be careful enough to feel that you are protecting your customers, your co-workers and yourself.

“No income? That’s rough, but hopefully the things we do now will pay off later.”

She said, “This is showing me how many businesses are so close to the edge at all times, whether it is a restaurant, coffee shop, or theater: they’re riding the roller coaster. I believe that this will make us stronger in interesting ways. You have to be smart and do the simple things.”

“After all this is over,” Mrs. Southerland says, “I think the message is — even I have gotten overwhelmed with Amazon. We have to remember to buy local.”