Fought off a rabid coyote; Rita is a survivor! 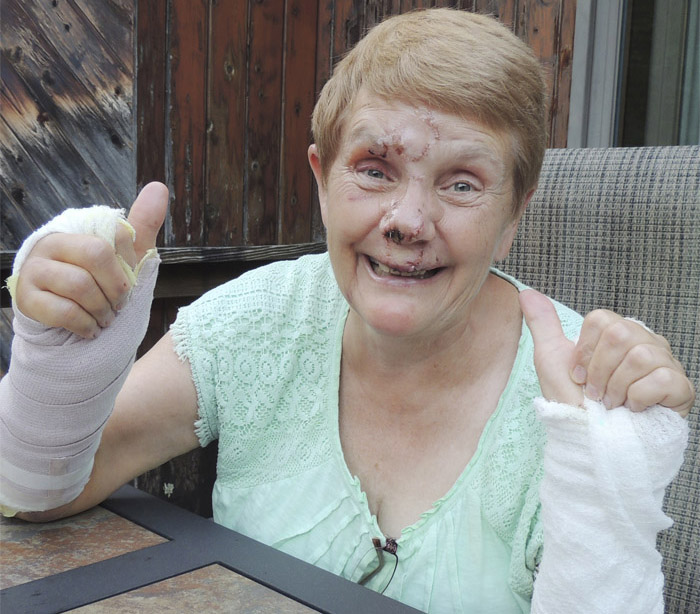 “I’ll give you the thumbs up,” Rita Sweenor said in posing for this photo Monday evening, five days after a rabid coyote ripped open her scalp, face, arms and legs. How is she doing? “I’m a positive person…I have a lot of recovery to do. Will I have scars? I don’t care. I am who I am. I survived.” Chronicle photo/Gordon Woodworth

“It was the most horrifying experience of my life,” 64-year-old retired nurse Rita Sweenor told The Chronicle Monday.

Last Wednesday, Aug. 16, she was mauled by what turned out to be a rabid coyote on the Washington County canal path connecting Fort Edward with the Feeder Canal and its series of locks known as the Five Combines in Hudson Falls.

Mrs. Sweenor is a 1971 Lake George High School graduate who worked for 40 years as a licensed practical nurse at Glens Falls Hospital. She lives in Gansevoort with her husband Dave.

“On my husband’s golf days, I go birding,” she said. “I love photography.” 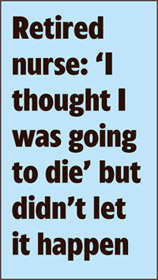 She drove to Towpath Road in the Town of Fort Edward and started walking north on the bike path.

“I go in on the Fort Edward side,” she said. “That’s where the birds are.”

“I always have my camera with me with my big 600mm lens,” Rita said. “I walk slowly to sneak up on the birds.”

She spotted a great blue heron and stopped. A couple on bicycles passed her.

“I was taking photos of the heron, and my leg felt funny,” she says. “I wasn’t in pain. It just felt funny. So I looked down and a coyote had my ankle in its mouth.

“The minute I saw it, I knew it was rabid. I hit him with my camera a few times and it jumped at my face.

“It kept coming at me. It was no longer interested in my legs. It was all my head.

“I thought I was going to die.”

‘I had to stand and fight’

Rita says that somehow she grabbed her cellphone and dialed 911, “but it attacked me and I couldn’t hit send.

“I couldn’t run, and I knew I couldn’t let it get me on the ground. I had to stand and fight. I had no choice.”

At one point she says she had the coyote pinned to the ground, her hands around its throat. “But when I moved my hands to get to his trachea, he got free again. It attacked me 10 to 15 times. And each time I tried to throw him in the canal, he would get out and come back at me.

“The third time, he had his mouth around my hand, and I reached around and grabbed its rear leg, I don’t know which one, and tried to throw him in the canal, but we both fell in.

“I thought I would toss him in and drown him, but when I fell in and he disappeared, I tried to walk across the canal, but the mud was up to my hips. I couldn’t walk. And the weeds were so thick. It was very slow going. It was like trying to swim through thick soup.”

She finally reached the other side of the canal. “I climbed up and I didn’t know how bad I was hurt. My right arm was ripped open and all I could see was tendons and bones and a blood vessel spurting blood, so I wrapped that in my shirt.

“I was still not feeling any pain, but I knew I would bleed to death. I had to find a house. So I looked up and started making my way to the closest house I could see.

“There was a short barbed-wire fence that normally I would have jumped over with no problem, but it took me three tries to get over the fence.”

She got to an old farmhouse, the home of Ennio and Sharon Ruggi, and saw there was a car in the garage.

“Those poor people,” Rita says. “I pounded on the door, and he opened it and could see what I couldn’t see. My scalp was ripped open, my nose was cut in half, my lip was hanging, both arms were bleeding, both legs were bleeding.

“I told them to call an ambulance and call the state troopers because I had been attacked by a rabid coyote. I was scared it had followed me, so I asked, ‘Can I come inside?’

“He called 911 and the Fort Edward Rescue Squad got there very quickly, and took one look at me and immediately called for a helicopter. They said I was going right to Albany Medical Center. I must have been a sorry sight.”

“Those people in the house saved my life,” says Rita. “They got me the help I needed. The folks from the Fort Edward Rescue Squad were amazing. So were the state troopers and the folks at Albany Medical Center trauma center.

“The whole system worked and saved my life. I’m grateful to all of them.”

In the ambulance ride to the helipad — she believes it was in Wilton, but isn’t sure — medics put tourniquets on her right arm and left leg to stop the bleeding, and gave her morphine for the pain.

“Then they loaded me onto a State Police helicopter. I was still lucid, but I couldn’t feel any pain. I didn’t know how severely I was hurt.

“We got to Albany Med and I was brought right into the trauma room. There had to have been 30 people in the room, each doing their own thing. They stabilized me, cleaned me up and then brought me into surgery.”

Even before the coyote was found, killed and diagnosed with rabies, Rita was given treatment for rabies.

Her first rabies shot was administered in the operating room, and she received another shot on Saturday. She was scheduled to have another on Wednesday, Aug. 23, and another next week.

“The normal protocol is four for someone who was bitten,” says Rita, but she’s looking for more. “I want five because they give five in extenuating circumstances…I was ripped open right down to the bone and tendons.”

Plastic surgeons reconstructed her face, and she was stitched up with “more stitches than I can count.”

‘You do what you have to do’

How did Rita survive? “When you have no other alternative, you do what you have to do,” she says. “I’m glad I’m healthy. I’ve had bypass surgery, but I always tried to stay healthy. I hike and exercise.”

She said she will go birding again, maybe not on that same trail, though.

“I will always bring protection now, either mace or a pellet gun or get a pistol permit,” says Rita. “It’s funny, but I never watched for animals before. I was watching for unsavory humans.

“I will go hiking again. I won’t go on that trail until I feel it’s safe. This was the most horrifying experience of my life. I wouldn’t wish it on anyone.”

Rita: Not safe yet

The Fort Edward canal path where a woman was attacked by a rabid coyote on Wednesday, Aug. 16, reopened to the public on Tuesday, Aug. 22.

“After consulting with NYS Fish and Wildlife and the Canal Corporation, the bike path from the Five Combines and Fort Edward, has been re-opened,” said the Washington County Sheriff’s Office.

“Users of the path should remain vigilant and be aware of their surroundings on the path — especially if an animal is seen acting in an unusual manner.

“If you believe that you see a rabid animal, you are urged to not approach the animal and call 911 immediately.”

The coyote believed to have attacked and severely injured Rita Sweenor was killed on Thursday, Aug. 17. Testing confirmed it had rabies.

Mrs. Sweenor thinks the trail should not be reopened yet.

“I believe there are more rabid coyotes out there. They are pack animals. I hope they keep that trail closed. I want them to trap all of them, euthanize them and check them for rabies. A friend of mine saw two of them together before I got attacked. There are a lot of them there.

“I love animals, and it’s not their fault, but you have to protect the public. It’s going to happen again and someone is going to die. And I never want anyone to go through what I went through. It’s still surreal.”

Washington County Sheriff Jeff Murphy explained in an e-mail late Tuesday morning, explained: “Contrary to popular belief the [state] Canal Corporation owns the land and after consultation with State pathologist decided to close the trail. We assisted by providing signs. We talked with them about an hour ago and they are reopening today.”