The Adirondack Folk School, located on Main Street in Lake Luzerne, has started offering classes in Glens Falls through the Shirt Factory in a new annex next-door.

The site is the former Perkins Recycling Building, where Eric Unkauf — who owns both this building and the Shirt Factory — has installed a ground-floor classroom and office space for the Folk School.

During the winter, the Folk School held a canoe-building workshop in the space. The intensive five-day class sold out all four $1,900 slots.

“We made this arrangement last year,” says Folk School director Scott Hayden. “Eric offered us this great space for a year at a great price because he wants to see it succeed — and then, we’ll see how it works.”

Mr. Unkauf said he met Mr. Hayden at an Adirondack Regional Chamber of Commerce event, “and I was impressed by what they do. It fits with the Shirt Factory,” where the thrust is artist and artisan studios, galleries and the healing arts.

The two expect that Adirondack artisan-teachers from the Folk School in Luzerne and, now, artists at the Shirt Factory will hold classes in the new space.

“It offers us tremendous flexibility to expand our offerings, availability and visibility,” Mr. Hayden said.

“Especially with the new Glens Falls Arts Trail that is coming,” Mr. Unkauf adds. The Arts Trail, now under the umbrella of the Glens Falls Collaborative, is on the list of requests for funding by the City’s $10-million state Downtown Revitialization grant, to create signage, sidewalk stamps, banners and other marketing tools to direct residents and visitors to the many downtown arts offerings.

The new arrangement is a boon to artists. Mr. Unkauf said, “What I see is, a lot of artists who are great at doing art, but not necessarily the business end of it. Where I see the Adirondack Folk School’s strength is, they bring students in from all over the country, and it’s an opportunity for the artists in the building to expand that end of what they do.

“They can concentrate on their art, while the Folk School can provide their expertise at the other end, getting students, putting out the syllabus, collecting the money. It’s kind of a natural fit.”

Mr. Hayden said about half of the Folk School’s students come from afar, for what they call a destination vacation — where they learn to make something, pick up new skills, perhaps, and come home with something they made themselves.

Mr. Unkauf said he imagines Glens Falls will be even more of a draw than Lake Luzerne, with the Queensbury Hotel undergoing major renovations under new ownership, plus the number of restaurants and museums within walking distance — “especially in the cold winter months,” compared with the relative isolation of Lake Luzerne, at least in the off-season, he said.

Mr. Hayden said that in-season tourist-students typically stay at campgrounds or motels in the Luzerne area.

Anecdotally, Mr. Hayden tells of a vacation-student experience when a young couple celebrated their anniversary by taking a blacksmithing course together.

Another pair of older couples saw the men learn to forge knives and make tomahawks while the wives visited quilt shops and went sight-seeing around Lake George.

Mr. Hayden says, “What I see is the look on the students’ faces, the satisfaction and accomplishment when they complete a class. It changes your life.

“It’s a unique opportunity to leave your vacation with something you made yourself, that you can use and can be passed down in your families. It’s pretty amazing.”

Mr. Unkauf said, “Right now, the Folk School needs outside assistance and fund-raising to do its programs, but with this, I can easily foresee a time that they generate enough income from classes to fully support what they do.”

Among other offerings, two additional canoe building classes are planned in May and July here in Glens Falls. Mr. Hayden said one is already full, and the other has two spaces left.

Find other classes online at AdirondackFolkSchool.org, or call 696-2400.

The non-profit Adirondack Folk School, in the former Lake Luzerne Town Hall on Main Street, was founded by Jim Mandel in 2010.

It’s had some rocky going, including a long string of short-term directors and financial challenges that last year prompted a public plea for help.

But Scott Hayden, who took the reins as executive director a year ago in May, says, “We are looking really good now.

This year, he says they already have more than 200 classes planned, and more than 150 student registered, including nine sold-out classes.

Mr. Hayden previously was an administrator for the Boy Scouts Twin Rivers Council in Albany.

“I’m not an artist,” he laughs. “But I really love what they do here. I think I can help them with my administrative skills.” — Cathy DeDe 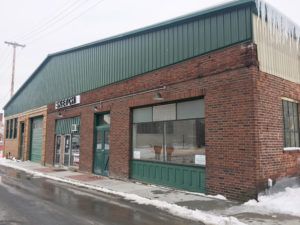 The Perkins Recycling building, now owned and overseen by Shirt Factory owner Eric Unkauf, was built in 1924 as a rail-side warehouse and distribution center for Nabisco and that it was a Montgomery Ward warehouse into the 1970s, he said.

Now the Adirondack Folk School is holding classes there.

Mr. Unkauf is renovating the building for retail/artist space, including a planned distillery and studio-galleries for large-scale sculptors, blacksmiths and other artists, in keeping with the Shirt Factory thrust. He said he hopes to use the green space between the two buildings for events.

The building is situated on Curran Lane, between Lawrence and Maple Streets, behind the Shirt Factory building in the East End of Glens Falls.