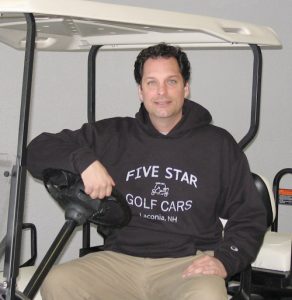 Larry Kelley started the business with two partners. From two employees in Queensbury in 2011, they have 15 year-round now.

“It just made sense for me to own,” Larry Kelley told The Chronicle Monday. “Now we’ll have a much larger shop area, a new showroom and a new parts area. I’m excited to stay in Queensbury.”

He said his golf cart business is booming.

“When I opened the Queensbury store, we had one mechanic and one outside sales guy, plus me.

“Now we have 15 employees in Queensbury, and more than 50 employees total. I’m so proud of that.

“And I keep them employed the whole year. I don’t lay people off. I get really good people, and now my brother Chris is there, so when I’m not there — today I’m finalizing a deal at Neshobe Golf Club in Brandon, Vermont — I know he’s there.”

Mr. Kelley, a PGA golf professional, said he, Matt McDonald and Steve Rand, a former Hannaford vice president, started the business in 2009, mortgaging their homes and pooling their money.

Five Star distributes EZ-GO golf carts in much of New England and eastern New York. They have three other locations, in Portland, Maine, Cape Cod and Laconia, New Hampshire.

“We’ve been in the Queensbury market since March of 2011, and having that location has really helped us,” Mr. Kelley said, noting that it’s close to the Adirondacks, where many customers have lake houses or summer in RV parks and campgrounds. 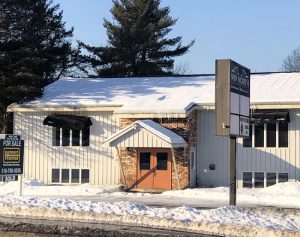 “We also totally customize cars, ‘Trick My Ride’ as we call it, and have our fleet business for golf courses. Having our location in Queensbury has been key. People are more apt to do business with you if you’re local.”

“And we also have Mohawk, the Edison Club, and of course the Sagamore and Hiland,” he said.

Mr. Kelley said they plan to be completely moved into the new 2.5-acre site in May.