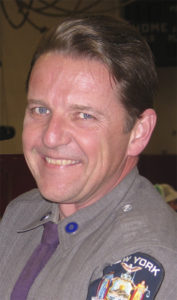 “We own and acknowledge the decision we made,” said Shane Pratt when contacted by The Chronicle. He said he was speaking as well for his brother James and sister Sarah. The family lives in South Glens Falls.

“I don’t blame people for reacting the way they did, for being disappointed or upset…We are moving forward…It’s time to take ownership, apologize and move on.” 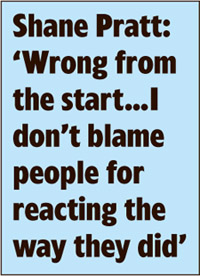 Mr. Pratt said they apologize to Joel Duguay, the driver of the vehicle that hit Trooper Pratt; truck driver Mikail Grudko, who Trooper Pratt was assisting in the median of Ballard Road on Oct. 26, 2016; and their father’s fellow Troopers, “especially those on the scene that day.

“And we apologize to our family for any pain or embarrassment, and to the community who has stood behind us throughout this whole situation.”

He said earlier this summer, he and his siblings received an insurance check for $2,000 that was labeled “death benefit.”

“We had no idea what it was. Along with our aunt Laurie LaFountain, who is the administrator of dad’s estate, we went to an attorney, who explained to us that filing a lawsuit was what we needed to do to claim on those death benefit policies, but we never intended to get any money out of either driver.

“The lawsuit called out Mr. Duguay as being negligent, and we don’t feel in any way he was negligent. It was a freak accident.”

Mr. Pratt said, “It’s not our intent to point fingers, but we weren’t prepared for how public the information would be, or the backlash on social media.”

Mr. Pratt said the family “hasn’t had time to grieve. Nothing can prepare you for decisions you need to make. We were told this was a formality and legality to pursue, the wound was still fresh, everyone was still grieving really hard, and we said okay.”

Mr. Pratt said since stories of the lawsuit were published in the Post-Star, Gazette and Times Union, “it’s been very hard.”

He said, “we want to continue to enact positive change,” which includes efforts to lower the speed limit on Ballard Road. The speed limit is currently 55 mph.

“The turn-in sign for Ace is now much larger and illuminated, and our cousin Beth Belair, who works at Ace, had a lot to do with getting that changed. But we want to lower the speed limit there. It’s a school zone. No other school zone I know of has a 55 miles-per-hour speed limit.”