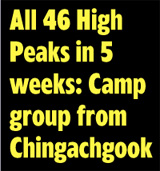 Editor’s note: Ella Pardy is a newly minted Adirondack 46er. The now 16-year-old junior at Queensbury High School was 15 as she summitted all 46 High Peaks in five weeks with five other campers and two counselors as part of YMCA Camp Chingachgook’s annual intensive backpacking “adventure.”

Ella is the daughter of Adirondack Winery owners Sasha and Mike Pardy. Sasha approached The Chronicle with the story and noted that the group hiked during “the wettest July we’ve had,” and that “the pack she carried on her back was probably 50-plus pounds.”

Below are excerpts from Ella’s thoughts from an e-mail question and answer exchange with The Chronicle, lightly edited for clarity and space.

Ella wrote: Over the course of my summers at camp I developed a love for the Adirondacks and hiking. Every summer I would hear about the 46er group and I would always think that they are the coolest people, and they were so inspiring. I would look up to them. So when I was old enough, I decided that I wanted to become one of those people…become a 46er myself.

I had done one High Peak prior to the 46er trip. I did Dix Mountain during 3-day hikes with Camp Chingachgook….

I’ve spent seven summers as a residential camper at Chingachgook.

Every summer that I went to camp I loved it. I met amazing people that have become lifelong friends and I’ve grown a love for the outdoors through camp.

I’ve learned so many things I never would have if it weren’t for camp, like sailing, backpacking, waterskiing, bracelet making, archery and so much more.

Camp has always been my favorite part of my year. Every time I leave I can’t wait to go back.

Our trip leaders put together an itinerary. They looked on maps, planned out every trail that we were going to do and planned the most efficient way to get everything done in the five weeks.

They created menus and planned for our resupply days as well. Camp would plan things like when we need to get picked up from a trailhead, or booking campsites for us and making sure we had everything for our resupply days….We would only carry 8-9 days worth of food at a time, then switch it out on our rest days.

Camp provided us with group gear that we would share. We had to bring our own things such as backpacks, clothes, sleeping bags, sleeping pads and mess kits.

We would get up between 6:30-8 a.m. depending on how long we thought the day ahead of us would take. We would set off on the trail after we ate breakfast, which was typically oatmeal or granola. We would eat snack or lunch, which was always sunbutter and jelly on a pita or tortilla, on the top of every mountain, and then we would head back down to our lean-to.

When we finally got back we would cook a nice warm dinner, typically Mexi-fest, pesto couscous, pita pizza, or mac and cheese. We would do the dishes and then head off to bed.

The high points [of the trip] were almost always at the top of a mountain when it was nice and you could see so much, or after getting back to base camp after a really long day, taking our boots off and eating an awesome meal.

There weren’t too many low points but I would say that the lowest point was during week one. It had been raining the entire day and we were soaking wet coming back down after doing three peaks. The trail was a flowing stream up to about our knees. At that point we had all given up with staying dry and we were just walking right through the water for about 2 miles.

My favorite mountain is a tie between Skylight — because it offers amazing 360-degree views of the High Peaks and is such a cool summit — and Rocky Peak Ridge — because it has awesome views and is a very peaceful summit.

My least favorite is Santanoni because after a very difficult hike with terrible trail conditions all it has to offer is more of the same: Trees and a sign that says Santanoni.

We finished the trip on Cascade Mountain with a sunrise hike. After coming back down the mountain we drove back to camp and had a good breakfast.

We were welcomed back by the campers and staff applauding for us in the parking lot. We spent the day doing different things around camp, and then were treated to a celebration dinner from a local restaurant of our choice. We chose Sushi Yoshi.

Everyone was so awesome. I made lifelong friends with them

I would recommend the trip to anyone who loves the outdoors and is ready for the most amazing five weeks in the woods.

Who would benefit from this trip is someone who is really wanting to learn more about themselves and is open to learning about what other kids think about the world and how they perceive it, someone wanting to appreciate their everyday front-country lives more than before.

What’s next for me is hopefully more hiking, and finishing other challenges such as the Fire Tower Challenge, becoming a Winter 46er, the Lake George 12ster, all the New Hampshire 4,000-footers…and hopefully much more!