A Queensbury couple with a combined 70 years in the restaurant business has opened DeNatale’s — serving traditional Italian and “Tuscany peasant” style cuisine — in Hudson Falls.

Kevin Golonka and Theresa Harwood-DeNatale transformed an empty room into a showplace in the Masonic building that Hudson Falls attorney Bill Nikas is reviving as the Sandy Hill Arts Center.

It’s located next-door to and just to the north of the Strand Theatre — also recently revived.

The menu ranges from pizza and homemade soup to classics like lasagna, chicken marsala and pastas plus house specialties such as Country Style Rigatoni ($19.95) with sausage, broccoli, onions, garlic and cannellini beans in light broth with parmesan cheese, and Zesty Zucca Rustica ($16.95) — Spaghetti Squash tossed with sausage, tomatoes, peppers, onion, garlic and cheese in a rustic tomato sauce. 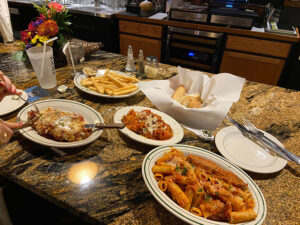 Kevin says of the menu, “There’s some stuff on there that probably 30%, 40% of it that you will not see in other places.”

Theresa calls Kevin’s Chicken Parmesan ($18.95) “out of this world. It’s not from a patty, he hand breads it, hand trims the chicken.”

She also touts the Chicken Scarpiello ($21.95), a “spicy chicken dish with a white sauce. And we’ve had a great response to our Seafood Fra Diavlo” ($23.95), Shrimp and Scallops in a “zesty red sauce” over linguini, says the menu.

The extensive bar has 10 beers on tap, “from pilsners to stouts,” says Theresa, including several craft locals, plus Downeast hard cider and Truly seltzer. “The Downeast is unbelievable. We use it to make a caramel apple drink,” she says.

Generations in the restaurant biz

Kevin’s restaurant roots run generations. “My father owned like six different places,” he said. “Sandpiper in Watervliet. Otto’s on Latham Circle was my grandfather, Otto…The Rusty Nail in Clifton Park, and the Study and Lounge.”

“I’m originally from Latham,” Kevin says. “But I’ve been living up in this area since the early 80’s.”

Theresa says, “I met Kevin when I was 18 at his family, his dad’s restaurant,” Peabody’s on Lake George.

She notes, “I’m from Hartford originally. My grandfather was Floyd [Harwood], so I have a soft spot for Washington County.” Hartford’s Elementary School is named for the late Mr. Harwood, a teacher who created the vast, fondly remembered Log Village Grist Mill Museum.

“Kevin’s gotten really good at the crusts,” she adds.

Kevin says the rigatoni with sausage and broccoli is “a country peasant…dish” whose recipe comes from a “famous restaurant” in New York City now closed.

Theresa elaborates, it’s “a little broccoli with a light sauce, not a creamy sauce, a really light sauce. With cannellini beans.”

The signature spaghetti squash dish — “it’s almost like a twice baked potato but it’s got vegetables and tomato sauce and sausage,” Theresa said.

She says, “I’m one of these foodies — I’ll go to one place, because I want that. And we’re going to try to do some of that here.”

Kevin said, “We know from experience that we would travel to someplace even out in the boonies….”

“To have one thing that we liked on the menu,” Theresa completed the thought.

DeNatale’s is situated at the rear of its building, on its northeast corner. Do they have qualms about being in the back of instead of the front? “Nope, not even one. There’s a new parking lot it’s got 102, 101 spaces over there, free municipal parking lot. Is it harder to be seen? Maybe a little, but we’re hoping that our food will — people will talk.”

See whole block as a destination

Theresa said they see the whole Hudson Falls block as “a destination. We’ll have this, the Strand, we’ll have Mullen’s,” referring to the former Maxwell’s Pub, next-door to the south of the Strand.

“We want to rock the block,” Theresa said. “I grew up in East Hartford and I remember when Salutos was — we did all of our family gatherings there because the prime rib was really good and the pasta was really good.

“We’re tickled about Triad’s [music store] moving in. It’s gotten to be kind of music and artsy on this corner of Hudson Falls and I’m excited about it.

DeNatale’s door opens on to the walkway into the Strand’s stage entrance.

“We get to meet all the bands when they go in the Strand,” Kevin said.

“We’re going to keep a couple of guitars here…So if a band member happens to walk in and they want to sign it,” Theresa said.

Kevin said his career has included a stint at The Montcalm in Queensbury and being general manager of a Cracker Barrel. He said his last job was at a senior living center, until Bill Nikas, who owns the Masonic building, approached him at Jim Gallagher’s recommendation.

Theresa says Bill told them, “I heard you two could run a good restaurant.’ And I went, ‘Oh, I don’t think we’re interested. But we’ll look.’”

“It was pre-COVID, actually. So there was no qualms about the pandemic — just with restaurant businesses. It’s seven days a week,” she added.

Kevin says, “I told my kids point blank; you don’t want to be in this business, even though that’s what I do.”

“You’re married to it,” said Theresa.

Initially they looked at the former County Courthouse building two blocks to the south, but “we weren’t crazy about how it was cut up. And the parking I think was a concern for us,” Theresa said.

“And [Bill] said, ‘Oh, yeah, this other building but there’s nothing in it.’”

But once they walked through the door, “we saw the potential.”

“The bar wasn’t here. The ceilings were out…” Theresa said. “It was in pretty rough shape. The floors weren’t there…the front of the bar [they’ve built and that Kevin designed] is repurposed out of the ceiling.”

Covid set them way back. “We had planned to be open a long, long time ago,” says Theresa. “Thank goodness Bill, he was fabulous to us. He held this place and we couldn’t have done it without this teamwork.”

DeNatale’s opened on the day after Thanksgiving and the couple said they’re feeling their way along.

“Our original plan was to be open lunch and dinner, seven days. That was our plan pre-COVID, pre-people not wanting to work, pre-not being able to get food, all those things,” says Theresa.

DeNatale’s is open Wednesday through Sunday at 4 p.m., until 9 on weekdays, later on Friday and Saturday. Closed Monday and Tuesday.

Theresa said they’re getting requests for take-out. “We will we will try to accommodate that,” she said, but cautions “we’re kind of feeling our way.”