Darling Doughnuts on the rise

Natascha Pearl-Mansman, owner of Darling Doughnuts, says, “It took me six months to sell my first 1,000 doughnuts. Now I sell 1,000 each week.”

The 32-year-old Glens Falls native graduated from Simmons College where she studied studio art and philosophy — “the most unhireable degree,” she calls it.

Now she rents the commercial kitchen at Temple Beth El in Glens Falls and sells her doughnuts at local pop-up events, including every Thursday afternoon at the Shirt Factory Food Truck Corrals in Glens Falls. 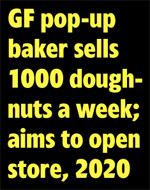 “My plan for the next year is to have a brick-and-mortar location locally,” Natascha says.

“My original goal had been to be a teacher. I’ve always loved to teach, and when I was in college I worked as a teaching assistant. I thought that I would go get my masters and teach art.

“Life just happened and this is where I ended up. I got married, had a baby and was out of work. I can’t sit still; I was baking for fun. People had always told me, ‘You make such great food; you should sell it.’ But I didn’t really take it seriously until I had the time to take it seriously.”

Now Darling Doughnuts are selling like hot cakes. But they are certainly not cakes.

“A lot of people are used to a cake-style doughnut, like a cider doughnut,” she says. “They’re amazed at how fluffy my doughnuts are because they’re yeast-risen.”

The dough rises for 12 hours in the refrigerator, before proofing and rising for two hours, frying, and finally, the doughnuts are glazed and topped.

Natascha proclaims, “My doughnuts in particular are awesome because they’re made with real ingredients.”

Her Blue Strazzberry is made with blueberries, strawberries and raspberries; her Apple Pie has apple glaze, baked pie crust and a crumble of oats and brown sugar; and her Lemon Meringue Pie includes freshly candied limes.

Sadly, Natascha’s personal favorite — Earl Grey, whose glaze is made with tea, honey, lavender and orange zest — is no longer on the menu. “I really liked it, but it just didn’t sell,” she says. “I think it was too obscure for the average doughnut eater.”

“I think doughnuts are a quintessentially American food,” Natascha posits. “It’s the kind of thing that’s a dessert but also a breakfast, something you can eat late night, something you can hold in your hand. I was told by someone at the Salvation Army that during World War II, women would deliver donuts to where troops were stationed to remind them of home.”

Asked the spelling she prefers of her delicacy, Natascha says, “Definitely a -ugh. When I see ‘donut,’ I think of cake donuts, like Dunkin’ Donuts that are quick to produce and cheap to buy. When I see the long spelling, I think it references the more labor-intensive process of making the yeast-risen doughnuts.”

She says that coming up with her recipes, “a lot of times I think of desserts and food that I like, and then try to make a doughnut version of it.”

Being in business, Natascha says, “The hardest part, really, is that when you own your own business, you’re on the clock 24-7. Even if I have a day off, I’m not off. I’m answering e-mails, scheduling events and ordering supplies. I probably put in 60 hours a week, just me, as the sole proprietor.”

On the plus side, “I eat a good half-dozen doughnuts each day that I’m cooking. What’s the point of being the baker if you don’t get to enjoy what you’re making?”

From a foodie family

Natascha and her husband Joe Mansman live in Glens Falls with their daugher Clementine, age two. Joe is a district manager at PacSun. The couple said they schedule their work so one of them always with their daughter.

“Clementine will help me mix things and prep glaze ingredients,” Natascha says. “For crushed Oreos, I’ll put them in a double-layer plastic bag and let her smash them with a mallet. That’s her favorite way to help — smashing things.”

Natascha’s father Jeff Pearl is a custom contractor and electrician. Her mother Lisa is a school nurse. She has a sister Molly and a brother Paul. The Pearl family was always big into cooking and baking.

“My dad does the dinners and savory stuff, and my mom does all of the pies and desserts,” Natascha says. “We made homemade Chinese food, we rolled sushi, we made falafels, all sorts of stuff.”

Natasha says a family recipe she keeps secret by her great-grandmother Bertha made the cut on the Darling Doughnuts menu. It’s the Burnt Butter Pecan, a play on the Bertha’s burnt butter cookies.

Beyond her own kitchen, Natascha says the Exchange Cafe (formerly Rockhill Bakehouse Cafe) is a favorite of Clementine’s, who especially likes the soup.

“I have always loved Aroy Dee,” she says. “They have really good food and they’re really friendly. I also love Pies on Wheels, David Britton’s pizza truck. We had them cater mine and Joe’s wedding. They do a pizza that has four different types of mushrooms on it. So yummy.”

You can find information on Darling Doughnuts, including a menu, pop-up shop schedule and ordering info, at www.darlingdoughnuts.com or on Facebook.