Cuomo is our Putin

I’m not suggesting that he’s about to send the State Police across the Hudson to annex the Meadowlands in New Jersey, but am I the only person who sees the obvious parallels between New York Governor Andrew Cuomo and Russian President Vladimir Putin?

Both of them understand and exercise raw power.

Gov. Cuomo couldn’t care less what the namby pamby New York Times and other editorialists say about his refusal to debate or even acknowledge the existence of his primary opponent Zephyr Teachout, in the same way that Mr. Putin pooh-poohs legal challenges to his “rescue” of Crimea, his mobilizations to “defend” “threatened” Russian-speakers, his dismissal of any possible responsibility in the apparent shoot-down over Ukraine of Malaysian Airline flight MH17, killing 298 innocent people.

Andrew Cuomo, the ardent corruption fighter, created the Moreland Commission to root out wrongdoing in New York government once and for all. But when the investigators came sniffing around some of the governor’s favored few, at first he ordered the sleuths to change course. When they persisted, he abolished the commission altogether. 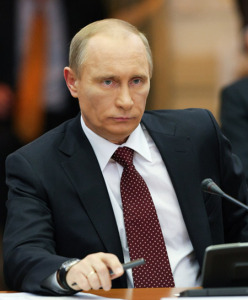 What both men comprehend is that if you have the popular vote, you can deep-six the second-guessers.

People in high places and some low places fear Putin and Cuomo. If you’re ever going to need government favor, you don’t cross Andrew. Surely it applies to Vladimir.

Not only are establishment Democrats scared of Gov. Cuomo, so are the “opposition” Republicans. So it is that Republican candidate Rob Astorino soldiers on by his lonesome, without the backing of his own party’s bigwigs. Don’t want to rile omnipotent Andrew.

He understands playing all sides against each other. A Democrat, he worked with Senate Republicans to negate the sway not only of Senate Democrats but also of Democratic Assembly Speaker Sheldon Silver. And when the Working Families Party threatened to withhold its endorsement because Andrew backed the 2% tax cap and some other measures that the union left abhors, Andrew rightly calculated that in the end they’d buckle to a deal.

Sure, they extracted the promise that he’ll disown the Republican State Senators he worked with in term one, but does anyone think he feels permanently bound by the bargain? It will last, like a Rupert Murdoch pledge, until Andrew sees bigger gain in leaving it behind.

There is no underestimating Andrew’s and Vladimir’s strength (these proudly athletic, manly men), or their will and resolve. Or their political I.Q. They know what buttons to push to win broad support. They know issues to avoid that can only bring grief. (Fracking, anyone?)

For conservatives, there’s the tax cap, tax-free economic zones, some tax cuts and avoidance of anything that could possibly be labeled a “tax increase” in a Presidential campaign. There’s legalization of casino gambling. He’s spotlighted the Adirondacks, made a tourism push.

There are enough various rewards for enough various factions to assure big and easy re-election. I’ve read that Vladimir’s support runs at about 90%. Russians can’t get enough of his gambits to restore the empire.

Andrew overplayed his hand enough that in Tuesday’s primary, upstate Democrats poked him in the eye, but he still prevailed by plenty. He can yet harbor Presidential ambition. If Vladimir persists in his aggression, Andrew — said to have been his father Mario’s enforcer — may be just the guy America wants standing ground vs. Vladimir. Slogan?