Chef Brian Bowden and his wife Carly Mankouski have leased the former Tallulah’s restaurant on Ridge Street in Glens Falls. They plan to open Radici Kitchen & Bar, “hopefully in early January or at least mid-January.” 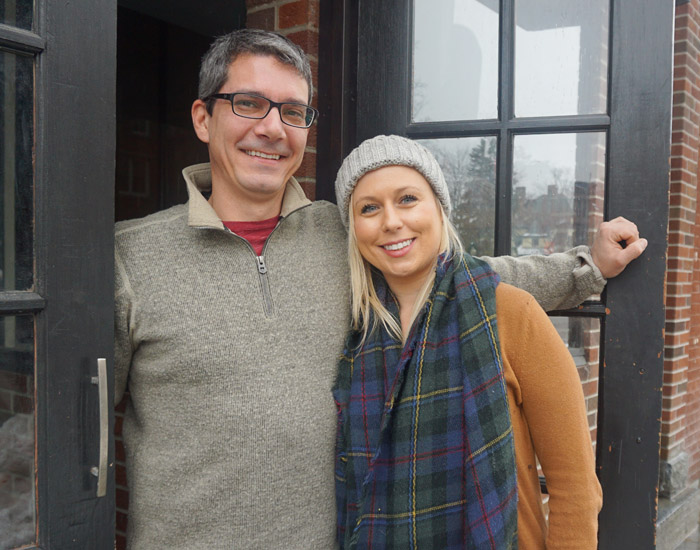 Brian Bowden and Carly Mankouski have long teamed up working in restaurants, but this will be the first one that’s their own. Chronicle photo/Cathy DeDe

“It’s about circling back to our roots, what we love most, about our passion for this industry,” said Mr. Bowden.

“It’s about us putting down roots for the first time together,” said Ms. Mankouski.

Radici will seat 50 and serve an “Italian-modern” but “wide-ranging” menu.

They said they’ll also have 14 taps including a dozen craft beers; and full wine, liquor service and craft cocktails, once they obtain their liquor license.

They plan to operate six days a week, closed Mondays, with Sunday brunch and maybe a classic Italian-style Sunday dinner.

“We have so many ideas,” the couple said.

They met about 10 years ago at the Ginger Man Restaurant in Albany, where Mr. Bowden was in the kitchen and Ms. Man-kouski was front of house.

It’s a partnership they’ve repeated at several restaurants over the years, though this is the
first venture on their own.

Mr. Bowden, 44, says he’s been executive or consulting chef for about 10 restaurants over his career. He said he got his start as a dishwasher at the local Elks Lodge in North Greenbush.

“I never went to culinary school,” he says, rather working his way up at a series of restaurants including Daisy Baker’s in Troy and the short-lived Javier’s in Saratoga, followed by turns at high-profile, high-end Saratoga restaurants Sperry’s and 15 Church, among others.

He said he spent a formative year at another high-end restaurant on St. Martin island in the Caribbean (it was named “Saratoga,” he laughs) where he learned to prepare fresh-caught fish such as halibut and salmon, both specialties now, he says.

Most recently he worked at Downtown Social in Glens Falls, originally as a consultant but then as executive chef, where he helped revamp the menu and, he reports, increased food sales by 40 percent.

He says he left “in fairness,” when the couple decided to pursue a restaurant of their own.

Mr. Bowden says fish remains a specialty, including what he calls his signature crab cakes — “no filler” — and a buttermilk-fried oyster dish with remoulade honey tabasco sauce and caviar.

He said he does Italian comfort foods such as Cacio E Pepe (“cheese and pepper,” he translates), and fresh-made pastas.

“We’d also like to stress we’ll have a wide variety of chef-inspired snacks and small plates. Pasta dishes and entrees will be available in half portions, and daily happy hour specials including $1 oysters,” he said.

“Brian has a way of putting a unique spin on comfort foods,” his wife says, adding, “I could eat his Halibut Ceviche every day.”

Price points will likely range from $6 or $7 for appetizers to as much as $35 for an entrée, depending on ingredients.

“We like to think of it as user-friendly,” Ms. Mankouski says. “Familiar items for those who are a little less adventurous and a couple of things that might spark the attention of real foodies. That’s what we’re known for.”

Mr. Bowden says, “As executive chef for a larger restaurant, you wind up getting away from cooking, and that’s not why I got into this. I want to be back doing most of the cooking myself, with Carly at the front.”

He said, “It’s a real drain working a big place,” especially summers in Saratoga, “sometimes 100 hours a week, and we have a seven-year-old son.”

Ms. Mankouski says “I describe what we do as casual but attentive service. We want your needs to be met. We want it to be fun.” She says, “We are in the process of putting together a great team of people we’ve worked with in the past.”

They expect to hire 12 to 15 people between front and back of house.

The couple is leasing from Chuck Mineo, who purchased the building after Bistro Tallulah closed. Mr. Mineo initially hoped his son Frank would run a restaurant there. Those plans fell through, and Frank opened his planned “gaslight” restaurant in Lake George Village, while proposed chef Colin Miner instead went to the Queensbury Hotel’s Park 26 restaurant.

Mr. Bowden and Ms. Mankouski said they’d long been exploring options to open their own restaurant, targeting Glens Falls. “It is as if this space waited for us.”

“We really like the space,” Mr. Bowden says, “obviously for the charm, the history of the restaurant, and it is a manageable size for a husband and wife team.”

He said the brickwork reminds him of Troy, where he grew up.

“Glens Falls seems to be really growing, with good chefs like AJ (Richards, at [farmacy] restobar next-door) and Colin (Miner, at Park 26).”

“I always liked the vibe of Tallulah’s,” Ms. Mankouski says. “They had steak frites and also sweetbreads on the menu. You don’t see that much, that range.”

Mr. Bowden said their opening date is “liquor license-dependent,” although he said they may decide to do a soft opening before a license comes through.

The couple said partner Mike Graney, who owns Graney’s Bar and Grill in Albany, is a financial backer, and that they have also put in financial equity, as well as physical work.

They said they purchased a home in Moreau about a year and a half ago. Ms. Mankouski said she plans to continue as a real estate agent with Select Sotheby’s International, “on the Dona Frank team.”