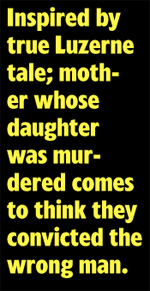 Matt Witten hit the big-time writing so TV series such as Law and Order and CSI: Miami, but now his focus is on writing novels, including a new one inspired by actual events in Lake Luzerne.

Matt has readings and book signings coming up locally.

Here’s an interview conducted by email.

Cathy: Gosh, it must be 20 years since you lived here and I wrote about your first murder-mysteries. Where do you live now? What are you doing with yourself these days?

Matt: I grew up in Baltimore and Cincinnati, went to college in Massachusetts, then moved to New York City, then came up to Saratoga Springs when our first child was born.

We lived in Saratoga for 10 years, until 1998. While I was there I wrote the Jacob Burns mystery series, four mysteries set in Saratoga that were published by Signet.

I also wrote several stage plays that were produced off-Broadway and around the world.

Then, in 1998, out of the blue, I got hired to be on the writing staff of Law & Order. I did that for three years, then moved on to other shows like CSI: Miami, House, Medium, and Pretty Little Liars.

I wrote on TV staffs for 15 years, then began writing TV pilots and also a movie called Drones.

Lately I’ve turned most of my attention toward novel writing.

The Necklace comes out in September,

I just finished a novel called Clickbait, and I’m starting a new novel.

I’m keeping my hand in TV and movies too: The Necklace was optioned by Appian Way and Cartel Pictures, with Leonardo DiCaprio attached as producer, and they hired me to write the screenplay. 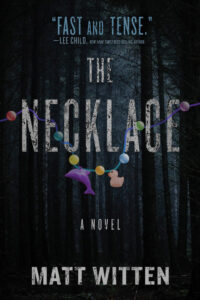 Also, I’m working with Madison Wells Studio on a TV series. But at this point, my favorite thing to do is write novels.

Cathy: If you’re still writing for TV – how’s it going? On the one hand content is king, we hear – but then, Covid…

Matt: Covid has certainly cut down on TV and film production!

There are a lot of scripted TV series now, but also a lot of competition when you’re trying to get a TV series off the ground. It’s very helpful to base a TV series idea on “IP” or “intellectual property” – i.e., a preexisting novel, foreign TV series, magazine article, or whatever.

It gives TV studios and networks comfort that the idea is workable, and they’re much more likely to go for it.

So that’s part of the reason I’m writing novels now – I’m creating my own IP. (Though by far the main reason I write novels is that I love doing it!)

Cathy: You say the story was inspired by a Post-Star article. Can you tell me a little more about that? How did that turn out, do you know?

Matt: I don’t generally mention the woman in the article by name, I don’t know if she wants the publicity. I know that she did attend the execution. After that, I’m not sure what her life has been like. I do wonder about it.

So here’s the story of how this article inspired me:

Nine years ago, I read an article in the Post-Star about a local woman who was holding a fundraising event at a local bar. She needed money to travel to the upcoming execution of the man who had murdered her young daughter twenty-two years before.

Everything about this story stuck with me: not only the tragic death, but also the woman’s dire circumstances and her quest to find justice and closure two decades later.

For years I wanted to write a novel about this, but I didn’t know what the story would be. Then one day I was having coffee with a writer friend, John Henry Davis, and he suggested: “What if the guy who’s being executed maybe didn’t do it?”

And that’s how The Necklace was born.

After I wrote the novel, I discovered something amazing.

There is a woman in Idaho named Carol Dodge who devoted her life to proving that Christopher Tapp, the man imprisoned for raping and killing her daughter Angie many years earlier, was innocent.

Thanks to Carol’s relentless efforts, Tapp was finally set free and the real killer, Brian Leigh Dripps, was arrested.

Cathy: Do you come back this way still, on occasion?

Matt: My wife Nancy Seid and I live in LA during the year, and then come back to Lake Luzerne for two or three months every summer. We love it here in Lake Luzerne.

Life is so much more pleasant when you enjoy your work, so I feel very fortunate to be able to spend my time writing.

Cathy: What else do you want people to know about the book, and about you?

Matt: You can preorder The Necklace now at Amazon and elsewhere. If you’d like a signed copy, please drop by one of my readings or signings.

Matt Witten has readings and book signings coming up in early September for his new novel The Necklace.

These actual spots in Luzerne inspire scenes in novel The Necklace 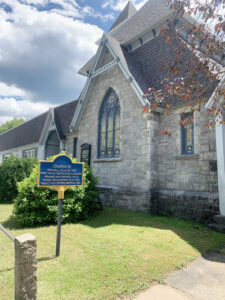 where the novel’s character Susan is a member of the choir. 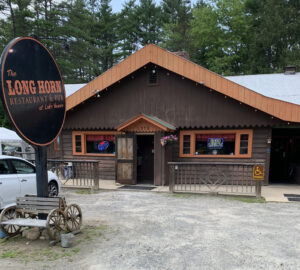 Longhorn Restaurant & Pub, inspiration for the bar where Susan holds a fundraiser to get money for her trip to North Dakota to witness execution of the murderer of her daughter. 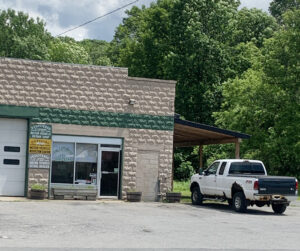 Cirillo Auto Services, where in the novel Susan gets her car fixed before her trip and the mechanic won’t take her money.