At Cifone Construction, Chief Financial Officer Carol Cifone said, “It’s almost impossible to find skilled laborers with experience. We’ve tried Craigslist, Indeed.com, the Post-Star. Sometimes we’ll get one person responding, and they will say, ‘Well I was a mechanic.’ Well, that’s not going to work!”

She said, “No one wants to work anymore. And I think a lot of the kids are so busy with extra-curricular activities that their parents pay for, and the guidance counselors are pushing kids to go to college. And they aren’t going to learn a trade in college.” 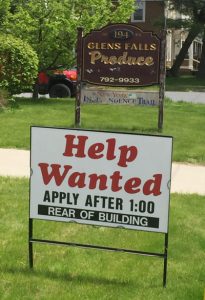 “I’m always looking for workers,” says Paulie Bricoccoli, a co-owner of Talk of the Town restaurant and The Bullpen tavern. “I like to keep an extra person on because you never know…If a really good kitchen person becomes available, I’ll find hours for them.”

But he said he’s hired seven or eight employees this month, but “they get their first paycheck and they’re gone. We never see them again.”

Queensbury Hotel general manager Tyler Herrick said, “When we need someone, there’s no issue getting applications to come in. We have had issues with finding quality workers and with retention.

“…Our biggest struggle is with this mentality of entitlement. And we hear that from a lot of other employers, too. Some younger people feel like they are above certain jobs and they have no experience…A job is a privilege. These kids say, ‘I’m not going to take less.’ Well, you don’t get a job, then.”

Mike Irish, human resources director for the Fort William Henry, said he sees young people “in their first year of college applying for manager jobs. In our generation, we started at the bottom and worked our way up. This generation wants to start a little farther ahead.”

Mr. Bricoccoli said he’s been fortunate that he and business partners Jason and David Krogmann and Scott Endieveri inherited experienced cooks Tom Stark and Dan Imrie at Talk of the Town, each there for more than 30 years. Waiter Craig Harrington is in his 37th year.

“If you know how to cook, you can take that skill anywhere,” he said. But “a busy kitchen is hard work. A Friday night at Talk of the Town is busy. It’s baptism by fire.”

He said he’s lucky to have two restaurants to place employees, because “they are more apt to stay if you give them more hours…We appreciate our employees. We’re old school and family friendly. Our people know they can come to us and ask for help.” 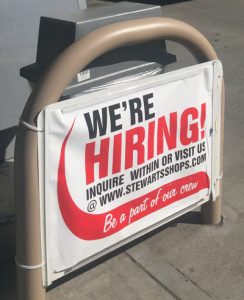 An estimated 1,600 international employees are expected to work in the area this summer on visa programs.

“The competition in this area gets really stiff for seasonal employees,” said the Fort William Henry’s Mr. Irish.

“There is a lack of people looking for work, mostly in the kitchen, and employees are tough to find, especially for the shoulder seasons in May and October.”

Keith Scott, who owns the Algonquin Restaurant in Bolton and the Lone Bull in Lake George, said, “The kitchen is like having a baseball team in spring training,” said. You start off with all the arms you need, and then August rolls around and you need a left-handed specialist out of the bullpen and a closer and a utility guy coming off the bench. It’s always a challenge.

“We start off with too much help, and have to give them hours doing odd jobs to keep them around. And then in July and August, we’re paying overtime.”

“And they are the highest paid employees in the place in terms of hourly wages,” he said. “I’ve got a stack of waitress applications a foot high, but I don’t touch them because all of my waitresses have been with me for years and nobody wants to leave.”

Mrs. Cifone is convinced that “the opportunity for good salaries in the future are in the skilled trades, because those workers will be so much in demand. She said many sub-contractors — plumbers, roofers, electricians — are getting older and are looking for people to take over their business.

“I know one business owner who would give his business to someone younger but he can’t find anyone!”

Mr. Albrecht said at Hilltop Construction, “our retention rate is high because our employees know how good they have it. We offer perks, more flex time. We have an employee who lives in North Creek and he wants to be there for his kids when they graduate from kindergarten or have a concert, and I’m willing to do that because I’m a family man. Those little perks mean a lot.”

Hilltop offers 401(k) retirement plans, paid vacations, health insurance and personal time. “We offer a career, Mr. Albrecht said. “But you must show up on time. It’s not optional. If they choose not to follow the rules, I shake their hand and say, ‘Thank you,’ and send them on their way.”

She said she has hired five students out of the BOCES program in the last year, “and four out of the five are still with us. Welders and machinists are horribly hard to find, so when we find them, we try to hang on to them, and we certainly treat them well.”

Mrs. Miller said they start at $14 an hour, with health insurance, profit sharing, 401(k) match and other benefits.

“We’re fortunate we have a good year-around business, and as Glens Falls continues to grow, there will be more and more year-round jobs down here, and it will be harder for Lake George businesses to find workers.

“Job fairs are dying,” says Mike Irish of the Fort William Henry in Lake George. “More people do things online than in person. I went to the SUNY Adirondack Job Discovery job fair in early April, and it was a pretty good turnout, but I didn’t get a lot of applications.

“Ten years ago I would have gotten a hundred or more. This year, I got less than 20.”