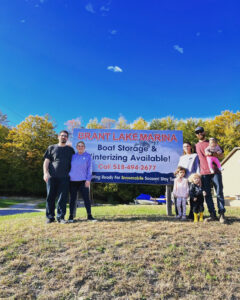 Claudia Vigorito, a Boston accountant,  has purchased the Palmer Brothers Marina in Brant Lake and renamed it the Brant Lake Marina, The Chronicle has learned.

She said she paid “right under $1-million.” Sellers were John and Pete Palmer, who started the business 32 years ago.

Ms. Vigorito said her goal is to move to  Brant Lake full-time from Boston, where her husband, Anthony, and daughters, 19 and 23, live.

Ms. Vigorito owns the marina herself. “It’s just me. I mean, my husband, he’s my backbone. He’s definitely my advisor…I wouldn’t be able to do this without him. He’s been able to give me that opportunity to say, ‘Hey, you have a vision, you have a passion. Okay, go for it.’”

In Boston, Ms. Vigoritor said she “runs operations” for an eight-employee engineering firm.

She said she’s been coming to her family house on Brant Lake for seven years, and has fallen in love with the area.

“I love the family feel that this place has. Like, everybody waves to you. I know it sounds silly, but Boston, the only kind of wave you’d be getting is really a middle finger,” she laughed.

“And everyone [in Boston] is just really high strung. I can’t say that I’m not also a high strung individual — I am, but I think that’s what gives me some drive. But at the same time, I love the family feel that this place has, I love the quietness that it offers,” she said.

An ‘epiphany’ while kayaking

Ms. Vigorito said she had an “epiphany” while kayaking on July 4 when a neighbor expressed concern over who would buy the marina.

“I didn’t want it to go into the wrong hands,” Ms. Vigorito said. “I guess that’s probably the most blunt way to put it. I wanted to preserve the community and keep it a marina.”

Ms. Vigorito said she was concerned it would become “monopolized.”

She didn’t want a larger marina to “just add it to their list. That dilutes the family feel, that dilutes the customer experience. And that’s what I wanted to preserve…After boat number 700, you just really become a number.”

She said she heard a rumor that the property might have been redeveloped.

“I was very lucky and privileged that the Palmer Brothers accepted my offer over a multitude of other offers that had been presented to them,” she said.

The Palmer brothers will help out until next spring. “They’ve put their time in, they’ve worked so many years here. They deserve to retire and retire stress free. Will they be welcome here? Absolutely. They have the keys to the place,” she added.

Ironically, Ms. Vigorito said she’d never owned a boat when she bought the marina, though she said she’s spent plenty of time on the water.

“Now that I own a marina, I need a boat,” she laughed. So she bought a pontoon boat several weeks ago.

She said she’s a big snowmobiler. “That’s what drove me up here as well, not just for the boating. Because to me, this community isn’t just a summertime destination…it’s an all year round.”

Is she nervous owning a marina when she’s just become a boat owner?

“That’s easy,” she said. “Honestly, I’m loving this, I’m loving all of the experiences, the growing pains that I’ve inherited. It’s honestly been a great experience.

“There’s going to be shortfalls along the way and bumps and bruises. But…I know that slow and steady will win the race.”

Plans a cafe at marina, too

She said they’ll rent boats and kayaks but keep “the storage and service area that the Palmers have done so, so well with.”

She says they’re going to add “more,” like snowmobile service, and “I’m trying to open up a small little cafe inside the marina. Can’t say that’s going to be next week, but it’s in the works.”

She wants people to say “let’s go meet at the Brant Lake Marina, and grab a muffin before we head out on the boat.”

She said they’ll spend the winter doing snowmobile service and “revamping” so they can kickoff in the Spring.