Ben Osborn Fund looking to make up $40,000; no golf tournament

The Ben Osborn Memorial Fund is seeking new ways to raise money after its annual golf tournament was discontinued.

“The fellow that ran the golf tournament for us decided he couldn’t do it” anymore, said Bill Osborn, Ben’s father.

“That’s significant,” Mr. Osborn said. “We’ll be scrambling. We’ve grown so much and been able to do so much, and to lose that revenue, that really hurts.

Mr. Osborn, of Lake George, said the tournament organizer “did a wonderful job for us, and we’re very grateful. He did it out of the goodness of his heart….He’s still doing another golf tournament, and if we were going to do it, we would have been in conflict with that. We would have been chasing the same people for prizes and donations. So we just bowed out, reluctantly so. The reality is it wouldn’t have worked out as well.

Mr. Osborn started the Ben Osborn Memorial Fund in memory of his son who was killed in action in Afghanistan in 2010. The Fund’s focus is assistance to youth and families, reflecting Ben Osborn’s own interest.

A book kiosk program that the Osborn Fund started in Lake George’s Usher Park has been “incredibly successful,” Mr. Osborn said, and “a dozen more are under construction and we expect to roll them out this fall. Queensbury has eight under construction right now. 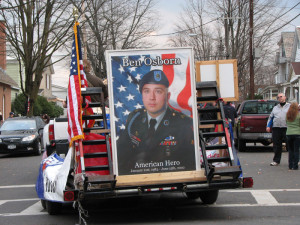 “The kids are building them in shop class. Granville is starting to put three together. We also hope to have them in Schuylerville and Bolton. Abe Wing will have a book station in the next two weeks.

The book kiosks are “designed for kids, and the idea is to get them to read them and enjoy them. They can keep them or return them. The idea is to bring reading material to kids.”

The Lake George kiosk “has kids there all the time” and the organization has replaced “between 500 and 600 books.”

“There are a lot of tough stories. We have dealt with a number of homeless kids. We have kids sleeping on couches with no sheets.

“And in the elementary schools, we supply clothing for kids who have had an accident or gotten sick. They can go back to class in comfort and with dignity and finish out the day in clean, new clothes.

They also award two $500 scholarships to worthy seniors at each school.

“Most people don’t know we have grown so much,” Mr. Osborn said. “For a little organization, we’ve done pretty well.”