Ben Miller, 94, D-Day survivor, was medic who flew into Normandy in glider

“Don’t write me up as a hero,” World War II veteran Ben Miller said. “The heroes were the guys who didn’t make it back.”

Now 94, Mr. Miller and his wife Mavis live in Johnsburg.

Seventy-five years ago, as a medic in the 307th Airborne Medical Company, he flew into St. Mere Eglise near Normandy’s Omaha Beach on an canvas-covered aluminum glider in the early-morning hours of June 6, 1944, better known as D-Day.

“We were towed by C-47s and then the pilots landed them,” Mr. Miller told The Chronicle. “The Germans planted poles and flooded fields to make it difficult to land. German Intelligence knew we were coming and how we were coming.” 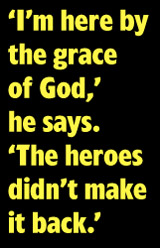 He says that as his glider, full of 13 medics, neared Omaha Beach, “the Germans were hitting guys around us, but most of us got to the ground. We weren’t in good shape, though. They tore the wings off our glider but we got down in one piece.”

“Then we went to help any infantrymen and paratroopers who were wounded. The first town we got to was St. Mere Eglise. It was the first town liberated. There wasn’t much left of it.”

American soldiers then “opened up roads into the interior of France,” and off they went.

“We were under fire a few times,” Mr. Miller recalls. “I was lucky enough that I never got wounded. There was shelling and rockets. I was 19, and scared to death.

“It was a week or two until we got together as a unit, and put up tents a hospital. We were in Normandy for about three weeks, and then we were told of another parachute group coming into Belgium and Holland.

“So they put us in trucks and Jeeps and sent us to Holland, where we took care of paratroopers there. The troopers were trying to save bridges. We didn’t want the Germans to blow them up.”

The movie A Bridge Too Far documented what Mr. Miller saw with his own eyes.

Then it was on to the Battle of the Bulge in December of 1944.

“I don’t remember how we got there, but the 82nd Airborne Division, which our medical company was part of, was on the move most of the time.”

In January 1945 his company entered a town called Ludwigslust.

“That was an experience I won’t ever forget,” Mr. Miller said. “There was a big old barn on the edge of town, and it kind of smelled bad. We threw open the barn doors and bodies started falling out.”

Up to 300 Jews, Poles, Czechs, Hungarians, Russians and Nazi-defying Germans — all emaciated, 200 of them dead — were in the barn.

“There were probably 100 still alive, but barely breathing, so we forced the German doctors to treat them and try to help them.

“Then the 82nd Airborne posted soldiers on each street corner and forced the civilians to walk by the graves of the 200 who had died. We wanted them to view the emaciated bodies so they could see what the Nazis had done.”

A few days later, Mr. Miller was in a Jeep on a one-lane dirt road “when we came around a corner and found ourselves looking down the barrel of a tank gun barrel. I thought it was all over.

“Then this German officer comes out of the tank, sees the Red Cross flag we were flying, and told us to turn around. He must have wanted to do something decent.

“We turned around so fast we left the trailer there. We were very fortunate to run into someone who had some feelings.”

From there it was on to Berlin, where he said, “We had to deal with the Russians, who were on the east side of the city. We were on the west side.

“If I had a truck full of Mickey Mouse watches, I would have been a millionaire,” he said. “It’s funny what people want.”

From there, he went back to France on a railroad boxcar, and by boat to New York City. He was honorably discharged on Nov. 24, 1945.

In his civilian career, Mr. Miller worked as a mechanic in New Jersey. Now in Johnsburg, he bowls a couple of times a week, and still splits all of his own wood to turn with a 13.5-pound monster maul.

“But my muscles are running low,” he said. “One winter I split 44 face cords of wood.”

Of his time in World War II, he said he learned first-hand that there are no atheists in foxholes. “I’m here only by the grace of God,” he said.