The second annual Adirondack Film Festival will kick off Thursday, Oct. 19, with a free screening of 2004’s Miracle — about the 1980 U.S. hockey victory in Lake Placid over the Soviet Union — on the jumbotron scoreboard at Cool Insuring Arena (formerly Glens Falls Civic Center).

The festival headlining event is a 30th anniversary screening of cult favorite The Princess Bride, with guest Chris Sarandon, who played Prince Humperdinck. 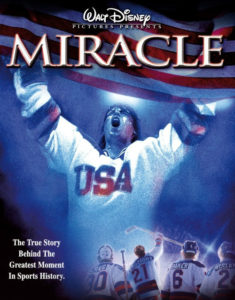 He said the Miracle screening is part of a larger community event, all free.

It starts at 5 p.m. with an Adirondack Youth Hockey League exhibition game and a meet-and-greet with four Adirondack Thunder players and Coach Brad Tapper, a Q&A with the coach moderated by Thunder announcer Evan Pivnick, and then movie screening. The Jumbotron will be lowered to the ice for the movie viewing.

The screening will be followed by a pre-festival party at the Queensbury Hotel for VIP pass holders and filmmakers.

They’ve added the Hyde Collection, where a new movie called Loving Vincent will be shown two times in the 140-seat Helen Froehlich Auditorium.

“It’s the world’s first feature-length entirely oil-painted animated film,” Mr. Rabinovitz says. “It’s about Vincent Van Gogh. It’s really huge, and it’s perfect for the Hyde.” He adds, “You can’t see this in the movies. It’s not even out yet.”

The Hyde will have its own Van Gogh on display, and one of the movie’s artists will attend the screenings. Festival pass holders will receive free Hyde admission to the Hyde during the weekend.

Movies will also be screened and events held at the Wood Theater, Crandall Public Library, the two theaters at 190 Grille and Cinema, and the Queensbury Hotel.

In all, they’ll have more than 70 films and short films this year, up from the 60-plus last year, Mr. Rabinovitz said. “And there’s still room to grow.”

Special events include a panel discussion with top screenwriters, still to be announced.

Also: A Friday night party with the filmmakers at Davidson’s Pub and Brewery, and Saturday night awards and closing party at 190 Grille and Cinema.

Festival passes cost $30 for each day, $50 for both days, or $75 for the all-access VIP pass that includes all festival events, parties, and priority seating. There will not be a la carte tickets.

Mr. Rabinovitz said they’re buying upgraded screening equipment for several of the venues, and planning a special breakfast for filmmakers, particularly to pitch Glens Falls as a location for movie making.

Grants they had hoped to receive through the Downtown Revitalization Initiative did not come through. The event is funded entirely through ATF, with increased sponsorships and in-kind donations “a huge help,” Mr. Rabinovitz said.

Share
Previous Our September 21 issue
Next Cirelli’s Osteria in SGF to close; to concentrate on Jam ‘n’ Eggs