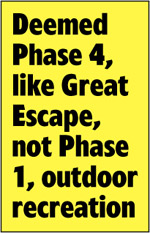 But Mr. Johnson said that someone’s anonymous call to the state Labor Department brought that plan to the attention of the Warren County Administrator Ryan Moore.

They are deemed an entertainment or recreational facility, like The Great Escape, Phase 4 or the last slated to reopen. Mr. Johnson says Mr. Moore is trying to advance their cause.

But Mr. Johnson explains, “If our business is not explicit written into the guidelines, then it can’t reopen. They [the state] would have to list zipline, or treetop adventure course, in the guidelines. The Governor’s office and Empire State Development (which oversees reopening), it’s still a new industry. It’s not even on their radar.”

He said Mr. Moore is working on their behalf.

Similar facilities in other states, such as Florida, Arizona and West Virginia have opened, “with restrictions,” Mr. Johnson said. “We think it is more comparable to hiking.

“The issue they’re asking is how are you going to sanitize the course, and you can’t, after each use. We have two miles of cable, 135 games and platforms. We have protocols, sanitizing stations at the harness site and at the start and end of the course.”

“So,” he said, “We’re in limbo. I’m just hoping, let me get some income in and pay some bills. We had tons of calls for Memorial Day. We could have filled the 50 people per day by Friday.”

Mr. Johnson says Adirondack Extreme was the first such treetop adventure course in the United States, built 14 years ago in 2007. They also build such courses around the country — 16 to date, with two more planned this year but currently on hold.

Editor’s note: As The Chronicle nears its 40th anniversary on Sept. 2, here is another …