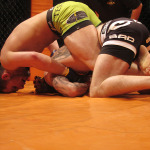 What is it that drives men to get into a steel “cage,” bare-chested and bare-footed, ready to kick, punch, drop and twist — and be kicked, punched, dropped and twisted in return — all for glory only, no cash prizes? The glory? I think maybe not.

Ringside at Cage Wars 25, Glens Falls Civic Center’s first-ever Mixed Martial Arts contest on Saturday, May 17: Well, you see it in their eyes.

You’d think as an outsider or casual observer that a pursuit such as this — a nearly anything-goes bout that combines elements of jiu jitsu, karate, wrestling and boxing — are about wild abandon, raw energy, ruthlessness, anger, ferocity.

And yes, there’s a touch of that.

Certainly the adrenaline is high.

I can report conclusively that the closer you get to the ring, the more obviously the sweat pours and a quite dominant sense-experience is the uniquely sour smell of a locker room.

But these MMA men, amateurs all, as required by law in New York State, they’re testing themselves. Mano a mano, perhaps, man to man: But my guess, after a full night of watching these men in shorts, mouthguards and boxing gloves go at it: This is about conquering yourself as well.

Climbing into the ring, each competitor shows his brand of ferocity. One raises his fists, another kneels to the mat. The crowd shouts loud approval, especially for local favorites. The combatants sit for a minute in their respective corners, blue and red, last-minute advice yelled in ears by trainers, then they rise to the middle of the ring to await the referee’s go-ahead.

Two nods and then, no bell, just the shouted command: “Fight!” and — well, there’s much behind a combatant by this time to propel him forward into the fists of another man, but I’m guessing there’s a bit of a leap of faith involved, too.

This isn’t the scary MMA of cable television. I saw no viciousness, and the ferocity reads as a ferocity of intent, intense concentration.

The athletes’ agility is often impressive: Sure kicks, shoulder-high, to the waist or to the opponent’s leg — punches shot square to the face. They survive twists that would make a yoga master blanche.

There was some blood — well, a goodly amount when you add it together — but not so much to make me squirm, overmuch.

Many of the guys were bleeding some from their backs, improbably, I guess from the kicks and drops. One common move is a side kick to just around the knee. There’s a way to drop a guy, eh?

One man twists the other down around his own ears, another lifts and drops his opponent — yow! — and they withstand the abuse, mostly.

They are very quiet as they fight.

Where straight wrestling goes for the pin, and boxing for the knockout, here it seemed to my untrained eye that a lot of the matches ended with an inescapable choke hold. The ref steps in, literally before one guy passes out.

“Good one,” a clearly defeated competitor breathes to his better, still panting, his chest dripping serious sweat. They hug it out afterwards, await the judges’ official decision.

The winner gets a moment to speak. As I’ve seen at stock car racing events, most eschew bragging about the conquest, rather thanking their supporters, trainers, the fans and God.

The ref comes off with an almost paternalistic affect, watching out for any real injuries, though frankly, the bar is pretty high on that.

One guy ended with an eye swelled shut, bleeding from nose and mouth. They wipe the mat and move on. But there’s no animosity. These are athletes working a thing out, about themselves, on each other.

The crowd, especially down around the VIP section, had a hip-hop vibe: Men dressed flashy, women even more so. In the stands, there’s maybe a little more wild yelling, but one guy near my original seats out in the stands (before I crept forward to claim press rights to a ringside chair) this one guy who was really egging the fighters on, loudly: Security came and advised him to back down or be kicked out.

Clearly, wild frenzy is not the point.

There are those unfortunate “Ring Girls,” young and barely clad, whose main job is to circle, all hips and high heels, holding high a numbered sign to signal Rounds 2 and 3 at the appropriate time.

May I just opine, here: Oy.

There’s little of the good-guy, bad-guy posturing you see in pro wrestling, WWE or even the locals. There are no costumes or personas, no discernible narratives outside the fact of the contest.

Instead, there is the clear desire in all cases, it seemed from my perspective, for each man to put out his best effort, play the ring, suffer the blows he can’t avoid, make good hits and — simply: Be in there. Don’t shy away. There’s no room for chickens here. Not even for those of us sitting in the stands watching those men go at it.

Share
Previous Hudson Headwaters to build 2nd health center, next to its one near Exit 18
Next Our June 19 issue