Now 12, Nolan Jacox has grown up with the South High Marathon Dance, as a participant and now as a three-time recipient.

Among core volunteers, he’s known as the Mayor of Marathon.

“My first memory of Marathon was being on Dan Albert’s shoulders as he walked from the production room into the gym for the closing in 2012,” says Nolan.

He lives with a rare autoimmune disease called Eosinophilic Esophagitis, known as EoE, that causes production of too many white blood cells, which makes him allergic to pretty much all food.

Nolan gets his nutrition through a feeding tube. He has had a rough year.

“I’ve only had two full weeks of school all year,” he told The Chronicle. “But I have a tutor at school who is great. Her name is Abigail Brigham.”

Nolan was a dance recipient in 2011 at the age of three and again in 2013, as a student at Tanglewood Elementary.

Now, as a seventh-grader at Oliver W. Winch Middle School, he’s a recipient for the third time. 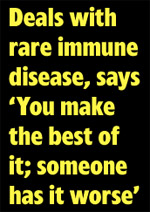 Nolan’s reaction? “I was overwhelmed with joy knowing we don’t have to worry about medical bills.”

One of the many side effects of EoE is Nolan’s immune system is compromised. He’s gotten the flu twice. He has to wear a mask in crowds. And because EoE attacks protein, his food is mostly vitamins.

“It weakens my body and my muscles, and I get tired easily because it weakens my immune system,” he said. “And we recently found out that the disease is progressing, so my treatment is at a standstill. I’m a test subject, and the doctors say they’ve never seen anyone worse than me.”

The Jacoxes fly to Cincinnati every three months for Nolan’s treatment at Cincinnati Children’s Hospital. He’s “part of a research group, and there’s a new drug that they want to test him with,” says his mom.

Nolan has a good friend as a fellow recipient. Dave Bennett, an active member of the South Glens Falls Fire Company along with Nolan’s parents, is fighting cancer.

Mom Anissa said, “People ask me how we do it. How do we not do it?”

Nolan, wise beyond his years, said, “I know there’s someone who has it worse. I just keep pushing through it because if I can do it, maybe they can too.

“Life is what it is. We’re in it for the long term. You just deal with it and make the best of it.”