The former cross country All-American at SUNY Cortland is now world-class. He finished 41st at last year’s Ironman 70.3 World Championships in South Africa and blitzed a strong field of 2,520 athletes to win the Connecticut 70.3 in early June by more than five and a half minutes.

“I qualified for the 2019 World Championships in France by winning in Connecticut, but I didn’t take the spot,” he said. “I didn’t want to prolong my amateur career into September.”

“You’re a marathon runner, a Tour de France cyclist and an Olympic swimmer, and you’re trying to do all of it,” Nick said, laughing.

Comparing his Connecticut time and his long-distance training times for Lake Placid, Nick is confident he’ll meet the qualifying standards to turn pro this month.

As a professional, he said he would earn prize money for top finishes in big races, and possible endorsement deals from bicycle, nutrition, apparel and Fortune 500 businesses. He is currently sponsored by Grey Ghost Bicycles of Glens Falls.

His coach Kevin Crossman of T3 Coaching said via e-mail that Nick is “already in elite status with multiple wins in some of the biggest races…I know he can be a pro. I want to see how far he can take it. I truly believe he is still growing daily in this sport and long-term (2, 4, 6 years from now), I think you will be seeing him perform against some of the best talent there is.”

Crossman said turning pro “is the best decision for Nick. He loves training more than anyone I have coached before. He seeks out challenges daily that he knows will push him to his limits. Ultimately though, I can tell, and most importantly, he truly enjoys the journey of being a triathlete. He makes his investment long-term and worthy. Is he ready? Definitely!”

Nick said Lake Placid “is one of the iconic races, being in the Olympic Village with all of the history behind it, and such a tough course. To race there is pretty cool.”

“I know the pace I can sustain for all three for hours and hours, and that’s a key for Ironman. My goal is to take down as many pros as I can, and it’s a very realistic goal given how I’m training.

“I’m racing on a pro level, but I’m still racing as an amateur. It will be fun to mix it up while I’m still an amateur.”

His goal? “I want to be top 10,” he said. “That would be huge. If I do what I did last month in Connecticut competing with the pros, I’ll be right there. People are going to notice you there. This will be a launch pad for my career.”

For inspiration, he says he thinks about his father Gary Marcantonio, the Glens Falls Class of 1968 athlete who passed away in April 2016.

“My dad never knew me as a triathlete,” he said. “He always knew me as a runner. The last thing he said to me was, ‘Keep doing what you’re doing,’ and I took it to heart. That’s my dad. I’m going to listen to him.

“If things get really hard in a race, I think about him and there’s no stopping me.”

How Nick trains, and what he eats

Here’s how Nick Marcantonio is training for the Lake Placid Ironman.

“The other days are open water endurance training, where I swim 3,000 to 4,000 yards straight.

“My run volume is much less than the swim or bike volume. I run four days a week, with a long run of 13-20 miles every week. My run volume is less because there’s a big risk for injury.”

At the table, he doesn’t count calories. 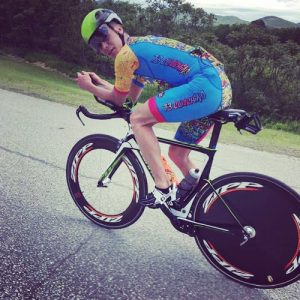 “After an early-morning swim, I’ll have a bagel or coffee, and then for breakfast I’ll have a lot of oatmeal, like a huge bowl, 4-6 eggs, toast. Lots of carbs and protein. Peanut butter, fruit.

“Lunch is usually sandwiches and fruit. I snack throughout the day, looking for as dense calories as I can, but healthy. Nuts, protein bars, granola bars.

“Dinner is usually salmon, steak or chicken, with pasta or grains like wild rice or quinoa, and veggies.

But, he admits, “sometimes you have to have junk food. After 140 miles hard on the bike, I’m not thinking about grilled chicken and veggies. I need pizza.…At the end of the day, you have to have fun.

“Every day I’m out there, I’m thoroughly enjoying it. If you’re not having fun, don’t do it!”

Share
Previous Saratoga County highway chiefs give Double H its ‘Field of Dreams’
Next Patrick: USA Women’s Soccer is the best team in all of sports