After 33 years auctioning antiques for a living, Mike Smith conducted his last one Saturday night at the Washington County Fairgrounds.

“It’s time. I’m 66,” Mr. Smith told The Chronicle Saturday afternoon — but he readily acknowledges that what prompted the end of Cherry Tree Auctions is that demand for antiques has plummeted.

“The business is a shadow of what it used to be,” he said. “It has nothing to do with dollars. It has to do with demographics and cultural change.

“The people who love this stuff are 60-plus. The 25- to 50-year-olds don’t want it at any price. They don’t like it. You get [items] before World War II and there’s nothing that they want.” 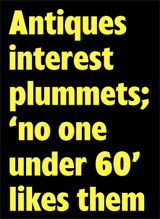 He says, “There’s still 15 percent of the stuff that’s still pretty sought after” and has “healthy pricing. The other 85%: What used to bring 12 hundred bucks, now it brings 4. Everything sells for a third of what it used to,” if it sells at all.

A Washington County native who went to elementary school in Salem and high school in Whitehall, Mr. Smith says he got into the antiques business in 1976.

“I dropped out of Harvard College,” he said. “I was a junior.” He said he was collecting unemployment and bartending in Lake George when he began going to auctions in Fair Haven, Vermont. “Bill Barsalow, Sr.,” he said. “Every Tuesday night.”

“It fascinated me,” said Mr. Smith. “How did this person know how to make money more than this one? I don’t know that there’s any purer expression of free enterprise. It’s your knowledge and your money against everybody else.”

“I love auctions,” he said. “I’d go two, three, four times a week and there were many around. I was a very active buyer.”

He said he struck a deal to manage an antique shop that existed on Route 149 near the Queensbury Country Club, and fortuitously happened upon a yard sale east on 149 toward Fort Ann in which two adjoining farms were selling everything they weren’t keeping as they prepared a Grapes of Wrath-style move to Arizona for health reasons.

“Everything was priced by category,” he said. “All clocks $10. The most expensive item in the whole sale was an iron range for $60.” He said those were selling for $400 back then. He “bought truckloads” and was on his way as an antiques seller.

He said his launch as an auctioneer came in 1986. “Ward Mason. He was my mentor,” Mr. Smith said.

He said he’s “seen all the great ones come and go.” He mentions Bob Scherer, who “at 93 was still was a force at auctions.” Mr. Smith talks about “the front row people” at his auctions, like the 85-year-old retired surgeon, who were loyal, regular buyers.

“This doesn’t feel right,” he remembers thinking. “Something’s odd. Since that time it’s been a continuing slide. It’s gonna get worse.”

Will older antiques come back in vogue?

He said antiques are “cyclical by decades.” He said events like the nation’s anniversaries in 1826 and 1876 triggered interest, as it did when he began in 1976.

Mr. Smith said one thought is that the antiques business needs to “lie fallow for 10 or 20 years, so a new generation can discover it.”

At his age of 66, Mr. Smith said that’s not a workable strategy.

“The phone continues to ring,” he says. People still want to consign antiques.

He’s thankful he and his wife Ellen could make a full-time living auctioning antiques. He doubts people will be able to keep doing that. He expects auctions will be done by “school teachers, insurance agents,” auctioneering as a sideline.

Mr. Smith won’t any longer auctioneer, but he adds, “I’m not getting out of the antiques business. I love this stuff.”