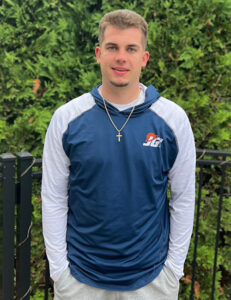 He’s been able to cash in on the NCAA’s new rules allowing athletes to profit from NIL (name, image, likeness) .

“I don’t know how many [deals] I have specifically,” JG3 told The Chronicle via Zoom from a “team apartment,” in Syracuse where he’s training this summer.

“And that was before taxes. So you obviously get taxed too…That’s a whole new world as well. Like I went from not even knowing what a tax was to having to pay them,” he said.

When the NIL policy went into effect on July 1, 2021, “I started getting deals right then and there. There’s been apparel deals, Cameo appearances, all that kind of stuff,” he said.

One such perk? He can host camps. The next is the JG3 Shooting Stars basketball clinic, Saturday, August 20 at Glens Falls High School.

Cameo is a platform that allows celebrities to record personalized videos for fans, for a price. JG3 is available.

What’s the strangest request he’s gotten? “To say sorry to somebody’s wife. I don’t know what it was for. He just said can you please say sorry to my wife for last night….I hope I don’t have to ever figure out what happened there,” he joked.

“Another one that was pretty funny was wanting me to talk trash to a team that we had just beat, and a fan of theirs.”

Is the NIL policy a good thing? “I think it helps college basketball, just keeping players and talent in college,” he said.

He said a lot of the NIL money goes towards transfer players seeking “the most money, which sometimes doesn’t work out the best.”

But “it also has kept a lot of guys who maybe two or three years ago would have entered the NBA Draft, not gotten drafted, ended up in a G-League situation where that probably wasn’t the best for them, and then you never hear about them again.” G-League is the NBA’s developmental league.

“So this allows college athletes who are kind of on that borderline of going to the NBA or going professional to stay in college, keep college/NCAA relevant.”

JG3 doesn’t have a strong opinion about the super-conferences consolidating high profile universities from across the country. He thinks football is driving these changes, not basketball.

“Let’s say we have those kids going on an away trip that’s literally all the way across the country in different time zones…I think you’ll see a lot of trouble in terms of location, and how that’s going to work out with television and broadcasting these games.

“I don’t have the answer to all that, the commissioners’ job is to do that.”

Syracuse team will be ‘really good’

Will Syracuse be good this year? “We’re gonna be really good,” said JG3.

“These freshmen are really talented, really athletic, they bring a lot to the table. They’ve worked hard.” And he said Benny Williams, Symir Torrence, and Jesse Edwards are all “good pieces” returning this season.

“I think last year’s team gets a little slighted just because of the record. But there was like six or seven games where we lost by combined 10 to 12 points.

“And the ball could have bounced another way, we could have been an over 20 win team in the NCAA Tournament. It just didn’t happen that way.”

Of not making the NCAA Tournament last season, JG3 said, “It sucks. Because you see teams that you either lost to…at the buzzer or a one-possession game or you see a team that you even beat, and they’re making the tournament.

“It’s frustrating, and especially after the run that we had the year before, going to the Sweet 16.

“After doing that you understand how magical and how special the NCAA Tournament is, and you kind of are itching all year just to get back to that moment and then to fall short, it sucks, sadly.”

JG3 said “every college basketball player wants [to] make the NCAA Tournament…hopefully looking forward to being back there this year.”

Playing in the ACC

Hardest team to play in the Atlantic Coast Conference? Probably Duke, JG3 said. “I think we’ve played them maybe four or five times and I don’t think I’ve won against them yet. I think that might be the lone team that I haven’t beat in my time here.

“It’s not that it’s the toughest team but I think it’s the most hyped up game,” but “there’s no night off in the ACC.”

Why does Syracuse have such a history of NCAA tournament success?

“We prepare all year long for what it takes to win in March, then March comes around and all these teams think that it’s a new season…but in reality, it’s the same game you’ve been playing since October, November in terms of the daily grind, and the daily process that we go through with pretty much the same thing every day. Coach trusts his players as well.”

“Obviously, on the court, people kind of see maybe sometimes the worst side of him. But off the court, he’s a regular guy. He’s fun to be around.

“I mean, even on the court, he’s fun to be around. He’s a legendary coach, obviously, he’s in the Hall of Fame for a reason, wins a lot of games and has a passion for winning.

“And I think that’s what you want in a college athlete is to play for somebody who cares about winning as much as he does.”

JG3 can return for a fifth season if he wants to, an NCAA policy enacted due to the Covid-19 pandemic. Has he thought about after college plans yet?

“After basketball, I either want to be a sports broadcaster, be an analyst for basketball, or coach, obviously. But I want to stay in the game forever. And the ball will always be my side somewhere.”

Note: Hear the whole interview. It will be released online as the first episode of The Chronicle Podcast. Go to our Facebook page for more details.

“It’s three hours of drills, competition, and then usually at the end…my dad puts me through the workout that I do,” JG3 said. “The campers get to watch and take home what they wish.”

“I show the kids what it is on a daily basis in terms of just getting in the gym and putting up shots,” he added.

JG3 said he wants to continue to grow the camp. “It’s still kind of early in stages because there’s all the rules with NIL and you can only do a certain amount of things,” he said.

“Hopefully I get to the professional ranks and the bigger it gets we could expand, have some guests come in, talk to the kids all that kind of stuff,” he said.

“This is…the most you can do as an NIL college kid but it’s pretty, I guess, big for what it’s worth.” His NIL apparel partner, Novus, is providing the shirts.

Has JG3 found the next JG3? he laughed, “No, I haven’t found them yet. I’m hoping it peeks its head soon but we’ll see.” — Zander Frost