Her first taste of [farmacy]

The Chronicle has a bird’s eye view across Ridge Street at A.J. Richards’ new [farmacy] restaurant that opened in April.

People seem to be streaming in, populating the chef’s bar in the open window nearly every night, even amid unfamiliar fare such as house-made beef heart pastrami, or seared scallops with a side of arugula “foam” and squid ink “tuile” — whatever that is.

“We’re doing great,’’ chef-owner Mr. Richards tells The Chronicle. “We are way ahead of where we thought we thought we’d be.”

So I tried it. In two visits I sampled eight dishes — most in small plates — plus one dessert and a couple of cocktails.

The 44-seat [farmacy] is the second project for Chef A.J. and his wife Christine. Their larger Hudson Falls restaurant [forged] in the former Washington County Courthouse likewise serves up a slightly off-kilter menu of semi-familiar dishes with a nouveau twist.

[forged], in its nearly two years of operation, has developed a vocally enthusiastic following — but I’ve gotta be honest, as I was with Chef when we spoke: It’s not a place that clicked for me, even as I find the adventurous menu appealing.

But madly, creatively, [farmacy] does. 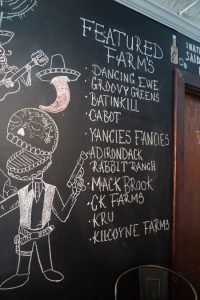 From a sprightly beet tartare (based on chopped beets and dark chocolate, not raw beef) to the aforementioned beef heart pastrami — a dense and lean meat sliced thin and served as a mini sandwich on grilled, smoked house-made sourdough with caraway butter and pickled mustard seed under Swiss cheese, I find myself fascinated.

A medley of vegetables comes in a long snake’s tail formation, under house-pickled shallots. “Hannibal tartine” — a nod to Silence of the Lambs — is a confetti-colorful tapestry on a lemony-rich slab of brioche, a visual cross between slices of thick-crusted square-cut “everything” pizza and a magical tapestry.

Seared duck breast was a straightforward good meat dish. Three seared salt-of-the-sea scallops came as a medium-sized plate with fried enoki mushrooms, that foamy arugula (mysterious, light as air) and a generous base of greens, in the form of wilted young arugula, not bitter.

The promised squid ink tuile is a sort of flash-fried latticed bit, dark and crunchy like a cracker.

The cinnamon donut dessert was crisp outside, rich inside, served with a bit of pecan brittle and a scoop of salt + pepper ice cream, heavy on the salt as I read it.

Odd ice creams are a house favorite. I got a sample of “sunflower sprout” that was also springy and fun.

Costs: $6-$9 for small plates, $6 to $18 for mediums, $14 to $25 for large plates. Depending on appetite, you can easily satisfy two people on a shared trio of plates in a range of sizes. The menu has several vegetarian, gluten-free and vegan options.

But now I’m sort of thinking I want to try Chef out on his more outskirts items — like fried chicken skin (really?).

Chef Richards says he’s spending the bulk of his dinner service time at [farmacy], except on Tuesdays when he’s at [forged]. Otherwise, his executive chef Dave MacIntosh takes the helm at [forged].

Chef Richards says he aims to be unique. “Anyone can grill a steak, but not many have pork cheek on the menu.”

And he says they use locally sourced bone marrow, chicken skins, beef heart — on purpose.

“The animal did pass away. We want to use the parts that are not usually used, to honor that animal. They are quite frankly the best tasting parts. You just have to work a little more to get that out.”

Everything is house-made, from the charcuterie meats to the pastrami, breads and ice creams, he notes.

The Hannibal tartare: “It’s edible art,” the chef says. “Food is our medium. You have to have fun.”

Share
Previous Our May 23 issue
Next Thinking of Nathan Brown