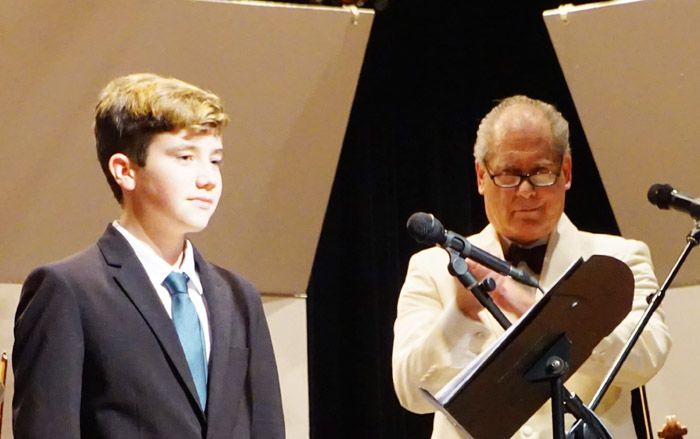 Man! This Schroon Lake 12-year-old can sing! His name is Drake Belrose.

He’s a boy soprano of rare and memorable talent. Clarion-clear, seemingly effortless in delivery, remarkably at ease while standing alone at the microphone before a crowd of mostly strangers numbering in the hundreds, young Mr. Belrose, of Schroon Lake, was the talk of the concert.

“O Holy Night” is what finally did us in, but young Drake had already solo’d on an Irish song “The Infant King,” on the Spanish piece “A la Nanita Nanna,” and an ethereal Pastoral from Hodie by Ralph Vaughan Williams, among other challenging works.

A joy to hear, simply, notable not only because he so beautifully and lightly conveyed the high notes. The timbre of his voice seemed especially to come out in the lower register — would we say, well supported? I heard depth and personality of expression, perhaps the sound of good things continuing to come.

Which isn’t to diminish, right here right now, watching him smile quietly in the direction of his mom and dad (who happened to be seated behind me) while the applause roared on — I hope that’s a moment he can long remember and enjoy.

Meanwhile, young Irish Step Dancers from the National Museum of Dance bobbed and leapt, Riverdance-style, on several lively pieces throughout the program, including one that Drake sang.

The Symphony was at its best on classical familiars including Corelli’s “Christmas” Concerto — a Baroque favorite of mine since they introduced it several years back on a prior Christmas program — and on Rimsky-Korsakov’s cheery Polonaise from Christmas Eve. 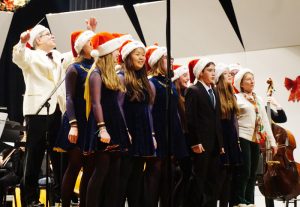 GF Symphony for the holiday: The mood was festive — Even conductor Charles Peltz donned a Santa hat for the finale and audience sing-along at Sunday’s concert. Special guests included Drake Belrose (front center), of Schroon Lake, with several jaw-dropping solos, and a a charming group of Irish Step Dancers from the School of Ballet at the National Museum of Dance in Saratoga. Chronicle photo/Cathy DeDe

With no conductor contest this year, for the first time in ages, Maestro Charles Peltz himself held the baton for the annual performance of Leroy Anderson’s “Sleigh Ride,” casually conducting with one hand in his pocket, and leading the audience to clap the piece’s famed musical whip cracks on the correct beat.

Interspersed were compilation orchestrations and arrangements of Christmas and Hanukkah tunes in different “world” themed flavors, charming and very much in the upbeat spirit of the season.