Matt Funiciello signed a contract Friday to sell the 19 Exchange Street building housing his Rock Hill Cafe to Chris Patten and his wife Sara. Mr. Patten, 34, is the South Glens Falls native who is redoing the century-old former hotel building that housed Mikado at the corner of Glen and South Streets in Glens Falls.

Sara Patten tells The Chronicle that she and her husband “will keep all of the Rock Hill favorites, keep all of the products, and expand the breakfast menu. We want to have a fun brunch environment.”

Mr. Patten said they’ll apply for a beer and wine license, and plan to serve “one or two fine craft beers, one good quality cider, along with wine and Champagne for different and unique mimosas.” 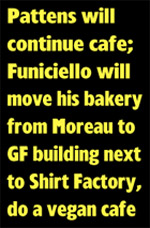 The Pattens said they will also seek City approval for a 12-by-40-foot addition toward Elm Street, to include a new dining room with an overhead door and a pair of 2-bedroom apartments upstairs. “We plan to add two new bathrooms, and we’ll gut and renovate the kitchen and add new windows, new siding and exterior facade, new heating and cooling systems, a new roof system and new signage.”

Meanwhile, Mr. Funiciello plans to move his Moreau Rock Hill bakery to Glens Falls, at 18 Curran Street in a building owned by Eric Unkauf, around the corner from the Shirt Factory Building at Lawrence and Cooper Streets also owned by Mr. Unkauf.

“We will also have a small vegan cafe,” featuring what Mr. Funiciello terms “the real show stopper” — vegan pizza “made with Rock Hill bread dough, homemade sauce and pesto and our own seitan topped with local veggies and (vegan) cheeses, previously unavailable in this market…. 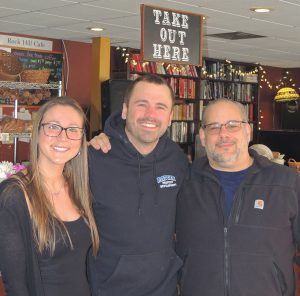 From left: Sara & Chris Patten with Matt Funiciello at Rock Hill Cafe, which the Pattens have purchased and plan to renovate while keeping “all of the Rock Hill favorites.” Chronicle photo/Gordon Woodworth

“I have been experimenting with pizza at home. I made one a few weeks back with fresh jalapeno and vegan sausage. Marley, my 15 year old test subject (not a vegan), ate 6 pieces and demanded more. I could not ask for a better affirmation that we have ‘cracked the DaVinci code’ where vegan pizza is concerned.

“It is my hope that my own transition to veganism, as well as my company’s, will serve as an inspiration to all those who are unsure that they could commit themselves to such a (seemingly) big change in their lives.”

Sara Patten will operate the cafe on Exchange Street. Current cafe manager Beth Wadleigh and chef Mark Colvin are among those employees expected to remain.

“We want to keep the warm, cozy environment that exists now, and add a modern twist,” said Mrs. Patten.

Mr. Patten said, besides weekdays, “our goal is to have a full brunch menu and to be open at least one of two weekend days.”

He said, “This continues our commitment in investing in downtown Glens Falls, with plans for more projects down the road.”

During the planned building expansion, he said, “Our intention is to stay open during construction, doing a lot of work on nights and weekends.”

Mr. Funiciello noted that Mr. Patten was a regular cafe customer and once was a summer employee in the bakery. “I know first-hand that Chris genuinely values what Rock Hill Cafe is. All that he will do is make it a lot better.” 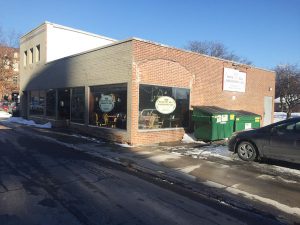 Chris and Sara Patten are buying the Rock Hill Bakehouse Cafe building. They plan a two-story addition with apartments on the west side of the building, and will add beer and wine to what they aim to call the Exchange Street Cafe. Chronicle photo/Mark Frost

Chefs & menu at the vegan cafe

Mr. Funiciello said the plan now is for current Rock Hill bakery employee Daniel Khokhar to be the chef at his new cafe, calling on his Pakistani heritage, while Mr. Funiciello’s sister-in-law Sirikit Katane will make soups and other Thai dishes.

He said, “Rock Hill will reset its sights on showing us all that plant-based foods can be every bit as amazing and delicious as ‘regular food’ and that there is no need to fear ‘missing out’ on anything. You truly won’t.”

Mr. Funiciello says they’ll carry on other cafe traditions. “We will offer used records, books, bulk foods, takeout and eat-in items and, of course, lots of local art and music,” including an Open Mic on Thursday nights, “just as we always have.”

He said, “We will be working with Eric to renovate our space over the coming months with hopes of being in operation at the new space before the summer hits.

“This new space will allow us to offer baking classes as well as tours of the bakery for area students.” 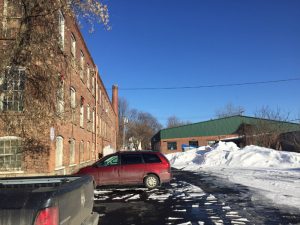 Matt Funiciello is moving his whole business, including his bakery in Moreau, into the building at right, on Curran Street in Glens Falls. At left is The Shirt Factory. Eric Unkauf owns both buildings. Chronicle photo/Mark FrostFrost

Mr. Unkauf says, “I’ve been wanting someplace to eat, back in” the Shirt Factory but will be “happy to have that next door.” He said he’ll “landscape it really nicely,” so they can have an outdoor eating space also. “It’ll be a great cornerstone for the building, great all the way around.”

Mr. Funiciello said the new 6,000-square-foot space is the same as in Diamond Plaza in Moreau, but rather than three retro-fitted retail storefronts, it is one large room that will have better efficiency and work flow — plus amenities like loading docks they don’t have in Moreau.

He expects to configure it with an approximately 800-square-foot “box” for the vegan cafe, located within the open factory space, so baking can be watched in action.

Rock Hill’s bakery has been in its Moreau location just north of Northway Exit 17 for 25 years. Mr. Funiciello said they produce 20,000 tons of bread each week, much of it wholesaled to New York City.

Mr. Funiciello said of his decision to exit Exchange Street: “After 15 years of not losing money, we had started to do so.” He said much-needed renovations were beyond his financial means. “Someone with capital…needs to be its new steward.”

An added factor, Mr. Funiciello noted, “On August 24th, 2015, I decided to become a vegan and I have eaten a plant-based diet ever since.” 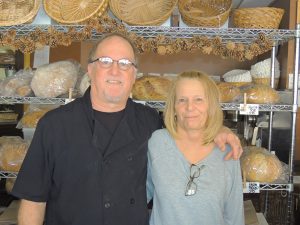 He said he added some vegan items to the Rock Hill menu, but “I cannot see a clear path to making a full transition….

“I have a great staff — much of which is not vegan — who make a good living at the cafe. Very few are on board with my turning the cafe into a fully vegan restaurant.

“So, while most people have been very receptive and supportive….I do not feel I can demand that staff and customer alike simply trust my pioneering spirit and jump off this precipice with me. But I, personally, must do so. It is how I am made.”

“On August 24th, 2015,” writes Rock Hill Bakehouse owner Matt Funiciello, “I decided to become a vegan and I have eaten a plant-based diet ever since.”

He says, “Our collective consumption of meat and dairy is a major cause, if not THE major cause, of global warming. In particular, the methane produced by the raising and slaughtering of 70 billion land animals each year is one of the largest single factors in the acceleration of global temperatures.”

He adds, “On average, it takes over 8 times the land and accompanying resource to raise meat and dairy than it does to just farm plants and consume them directly. This is a fact. There is no science to refute this simple truth.

“Aside from the environmental impacts, we are all now realizing that plant-based diets are much healthier for us (especially where cancer and heart disease are concerned).

“And I have more than enough first-hand knowledge about the cruelties inflicted upon our fellow sentient beings,” the animals.

He said his bakery in Moreau is now nearly all vegan, except for some specialty breads using cheese and honey.

He said he added some vegan items to the Rock Hill menu, but “while most people have been very receptive and supportive of our vegan menu at the cafe, I cannot see a clear path to making a full transition.”

In the consolidated, planned location on Curran Street in Glens Falls, Mr. Funiciello says, “Rock Hill will reset its sights on showing us all that plant-based foods can be every bit as amazing and delicious as ‘regular food’ and that there is no need to fear ‘missing out’ on anything. You truly won’t.”