The Fort William Henry and the Lake George Music Festival are collaborating on a plan to transform the vintage Towers Hall into a modernized, atmospheric venue to be called the Carriage House — suitable for large concerts as well as weddings, conventions and other gatherings. 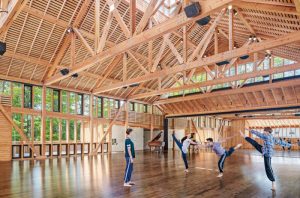 “This is something we’ve been looking at for at least five years,” Fort William Henry CEO Kathy Flacke Muncil tells The Chronicle. They’ve retained BBL Construction of Albany to create plans, including the renderings shared here.

Ms. Muncil said they hope to complete renovations by 2021, “or maybe the year after.” She projects the cost between $600,000 and “a million and a half, maybe $2 million, depending on what we do for sound and such.”

“It is a beautiful post-and-beam building from the 1800s,” Ms. Muncil said. They’ve used it of late for large wedding receptions, banquets and conventions including an NRA gathering, Americade and the Adirondack Nationals Car Show.

The project is coordinating with Alexander Lombard’s three-week summer classical music festival in August. He touts it as “a wedding palace and the premiere performing arts center in the village.”

It is separate from Mayor Bob Blais’s efforts to create a performing arts center in Lake George Village,

Ms. Muncil said the design resonates with the current trend toward wedding barns, but with the amenities of a traditional facility, “what we do so perfectly.”

She said, “We want to bring it to its former glory as we develop our campus at the south end of the lake. That’s our goal, and we are working hard at it.”

The project will require approval from the Adirondack Park Agency, state, town and village. “We are going at a very slow and passionate pace,” Ms. Muncil said.

It would accommodate “certainly at least 250 people,” she said, an as many as 700 depending on configuration and fire codes.

The planned design includes banks of wide windows looking out over the lake. Ms. Muncil said they are working with National Grid to bury current electric lines and plan to remove some trees to improve the view.

Ms. Muncil and Mr. Lombard said they are considering adding a balcony for additional seating options and possibly an outside veranda. Parking will be added, reconfigured in compliance with current stormwater practices, said Ms. Muncil.

There would be a raised stage and removable chairs for seating, Mr. Lombard said, to maximize flexible use of the space.

The festival would aid in fund-raising for portions of the project appropriate to their needs, Ms. Muncil said.

Mr. Lombard would have a long-term commitment to use the space.

“It’s somewhat perfect,” said Ms. Muncil. “He only needs three weeks in the summer, when we are already so busy.”

She said it might mean forgoing some wedding business those weeks, which she said works fine.

The corporation does intend to maintain “100 percent ownership” of the facility, though Ms.

Muncil said she would be open to using it as a concert venue beyond the Music Festival.

“It’s a marriage of needs, goals and passion — a year-round concert-ready facility, and we can still do weddings there, which is what we do best,” said Ms. Muncil.

She notes that Towers Hall “has had a lot of lives.” It was built as a carriage house for the original Fort William Henry Hotel. A second floor was added to store guests’ vehicles in the age of the automobile.

It was an original home of the Lake George Dinner Theatre under the late David Eastwood, then was mostly used for storage and sometime theater, convention, banquet hall and wedding venue.

Ms. Muncil and Mr. Lombard are both members of Mayor Blais’s committee to build a performing arts center. Ms. Muncil said the Fort’s project would welcome support from the Village — “if that were to happen, it would be great.”

The mayor’s initiative also considers the Lake George Forum as a performing arts center site. Mr. Lombard said it has plusses — mainly its size, and the possibility of hosting large-scale touring acts — he mentions James Taylor — such as the Cool Insuring Arena does in Glens Falls.

Fort William Henry CEO Kathy Flacke Muncil says the resort plans to revive the traditional Lake George Community Clam Bake, an end-of-season celebration she recalls from her days growing up in the Village.

“It was usually on a Sunday, late in September,” Ms. Muncil says, “put together by the Fire Department and other services, when everybody could take a break together, a way of saying thank you after you all worked so hard.

“We just want to get people in the community on the property to see each other, so we can look back at the season, again, like we used to do.”

Target date is Sunday, Sept. 22, with tickets to go on sale soon. They are currently seeking a non-profit or charity to administer the funds raised from ticket sales, potentially through the school district, to be used for the community.

“We’ll donate as much as we can,” Ms. Muncil said, “and we are working with others to get everything donated, including our vendors.”

She said the volunteer fire company will help with the cooking and set-up.

The event “ties in with the Carriage House, Towers Hall project,” Ms. Muncil said. “We are so lucky at the Fort, with Sam Luciano as president, a fabulous team of senior management, Fred Austin as board president.”

She said that since what she calls “the great recession” of about 10 years ago — which is about when she came on as CFO, and then CEO — the company has made an increased effort to engage the relationship between the fort site and the resort and to share local French and Indian War history with guests and the public.

“It’s about working together to support the stockholders, the guests and the community,” Ms. Muncil said. — Cathy DeDe