An effort has begun to turn Matt Rozell’s book A Train Near Mageburg into a documentary that aims to air in 2020 on PBS.

The story seems made for film: In April 1945 in the closing days of World War II, American soldiers chasing German forces come upon a train abandoned on its way to a concentration camp. Trapped inside, left to perish, are Jewish captives — now freed by the U.S. soldiers.

The story went untold until Mr. Rozell heard about it decades later, at the end of an oral history interview he was conducting as part of a World War II project with his Hudson Falls High School students.

It led to more interviews with American soldiers and Jewish survivors of the train liberation — and several reunions of the people involved.

Mr. Rozell told the tale in A Train Near Mageburg, subtitled “A Teacher’s Journey Into the Holocaust, and the Reuniting of the Survivors and Liberators, 70 Years On.” He’s now retired as a teacher but continues his popular series of self-published books from his World War II research.

On Nov. 4, during his speech as one of the latest class of inductees into the Hudson Falls High School Wall of Distinction, Mr. Rozell debuted a high-quality five-minute pre-production trailer for the planned documentary.

He also used the opportunity to announce an online crowd-sourcing campaign to raise the $500,0000 needed to make the film.

“I wanted to launch it where it started, in Hudson Falls” and to a “captive audience,” he laughs.

Mr. Rozell said the half-million dollar budget, which he calls “a drop in the bucket,” will help pay for production costs, travel to Germany and Israel for on-site filming and interviews, music and visual effects.

“Our goal is to have it ready for prime time in the spring of 2020” — the 75th anniversary of the liberation of the transport and the end of World War II, he said. 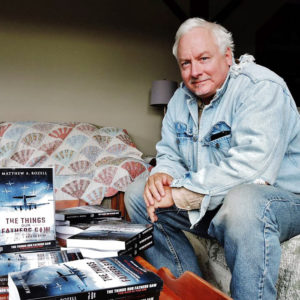 As a producer on this project, Mr. Rozell says, “You don’t want to mess up the story of the Holocaust. I feel a huge responsibility to get it right, and help Mike get it right.”

The project is directed by Mike Edwards of Columbus, Ohio. His production company has a formal letter of interest with American Public Television, which produces content that is typically distributed to PBS, public television.

Mr. Rozell says Mr. Edwards is a commercial filmmaker whose first “passion project” was a feature-length PBS documentary called Searching For Augusta. It followed a historian who set out to find a young mixed-race Belgian nurse who years prior had saved the lives of “a lot” of American soldiers during the Battle of the Bulge, Mr. Rozell relates.

The historian did find the unsung hero before her death, “and she got the recognition she deserved,” through the film, Mr. Rozell says. 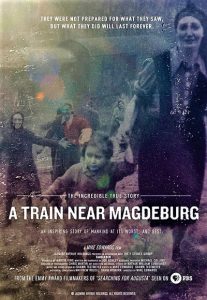 The filmmakers set up a non-profit foundation to make other such “humanitarian” documentaries, as Mr. Rozell describes it.

He says his connection to Mr. Edwards came about because Mr. Rozell collaborated briefly on a separate World War II book with a cousin of Mr. Edwards about the 20th infantry division that rescued the train.

Mr. Rozell emphasizes that so far, what they have done is pre-production — including interviews with soldiers and survivors, important as they are aged and time is of the essence.

“Please watch,” he writes online to introduce the trailer, “and be mindful of the Holocaust scholar who said to me, ‘When you teach the Holocaust, think of the reason why you are teaching this history. What do you want the world to be?’”

That last phrase he has picked up as a tagline for the documentary project.

Share
Previous A moment! At Skidmore’s 2nd Bernstein night, a gift
Next Our November 21 issue