After more than 30 years idle, the Salem Steam Works building dating from the 1800s will soon be back in business.

They are renovating the building and plan to live on the third floor, house their custom furniture business New Collar Goods on the first floor and eye the second floor as a “flex” space that could be used for events.

“We both grew up in Greenwich, and then moved to Denver in 2010,” Jon told The Chronicle. Jon graduated from Greenwich Central in 2005. Deana, maiden name Lewsey, graduated in 2004.

After high school, Jon went to St. Michaels College in Vermont. Deana went to Sage College of Albany. “At the time, honestly, there weren’t great jobs locally. And the cost of living in Denver at that time was pretty inexpensive,” said Jon. 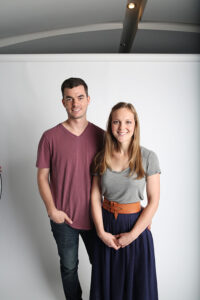 They moved to Denver without furniture, so he joined a workshop. “It was structured like a gym membership,” Deana says. “But what you do is you go and learn how to operate different tools. And you could do metal smithing, woodworking…Jon kind of got a head start there.”

Jon said, “I started acquiring tools on the side, just Craigslist tools, and found a friend had a little bit of extra room at his business. I started putting my tools there and building furniture on the side. So that just evolved into a full time thing.”

Now, the couple builds furniture together. “It’s just the two of us and we’ve been doing it for the last six years,” said Jon, who is also a welder.

He says their furniture style “was originally Scandinavian influenced” but now “we’re headed more towards like an all wood modern Shaker almost kind of look.”

He said, “It’s…solid wood furniture, and made to last with traditional joinery and everything.”

“We build everything to order, we don’t really hold inventory. They’re all one of a kind pieces. But we do have a line of our own furniture that people can choose from and select a certain size or wood species. Primarily we do dining tables…that’s kind of our mainstay.”

How fast did they grow? Deana said, “I don’t know how to quantify it….but really we could support ourselves pretty quickly. The Denver market was definitely receptive to our work.”

They’ve eyed the property for years.

“We’ve always been aware of its existence, because like I said, we grew up in Greenwich, we actually worked at the Sheldon potato farm for several years,” says Deana.

“Jon especially would be on his way to Stewart’s during break time and always was nudging his brother, because his brother worked there, too, saying, what the heck is going on with that building? And why isn’t anyone doing anything with it?”

Jon said, “Forever I loved it and kind of forgot about it with our move. And then we were back years ago, and I drove past it again. And it just struck a chord. I was like, ‘Oh, my gosh, that’d be perfect. That would be such a cool building.’“

Deana adds, “The commercial market in Denver is impossible. So we had had it in our mind to try to find a place to purchase to have our shop in, but it just sort of felt like it wasn’t going to happen in Denver. So I think in the back of our mind, it was ruminating. So when seeing the building again, with fresh eyes, I thought, gosh, that would be kind of ideal.

A family member found the owner, who was receptive to selling. After getting video of the space, they flew in October 2020 to check it out in person.

Deana said, “We had an inspection. So we had a bunch of people there with us going through and picking it apart. And that was the first time we ever saw it in person.”

Then they went back by themselves at night. “We went up to the third floor where we were planning on making our living quarters and envisioned how that would go and walked through the building again,” Deana says. “And it just sort of felt like something we had to do. I don’t know.”

Jon said, “We were trying to envision during that trip what it would be like to live here again, it had just been so long…It’s weird. It’s like a dream state, almost, where it’s like you know the place and you recognize it, but you’re pulling from your hard drive because you spent the last 11 years in a totally different climate.”

He says, “Definitely had some moments where we didn’t know what we would do,” because life in Denver was good. “There was nothing that we were longing for, aside from, I think, a property and…a different challenge.”

Deana says, “We have always loved it here, obviously, it’s where we’re from and we understand the beauty of it…we understood that part of it. And that would be wonderful to return to. But it kind of felt like it was a little bit out of the blue for us to make this leap. But that’s kind of also a thought, well, maybe it’s meant to be…”

“But in a practical manner. The zoning needed to be changed,” she said. “It was residential, and it needed to be shifted to mixed use because we would be living and working there. And so that was one of the contingencies of the sale.”

“We closed [the purchase] in the end of April,” Jon said. “So then we had to pack up our lives and our belongings and finish work in Denver, which was a ton of work.” They packed up their workshop and shipped all their tools back in a semi truck.

“It’s been quite the process. We’ve just came back and jumped completely into a renovation, which has been really rewarding. So much hard work and lots of decisions. But really, really cool,” he added.

Once the work is done, they’re looking forward to their residential space. Deana said, “We’re excited to design our kitchen cabinets and make our own special dining table…”

Jon said, “That’s been the nice part at the end of the hard day is dreaming about that stuff. It’ll be really fun. We feel like we’re in the thick of it right now with all….the dirty, gritty stuff.”

There’s plenty of the old building they aim to maintain. “The elevator is something we’re going to restore and make use of ourselves. It’s a leather belt driven elevator, which was functional, but we’re going to change the drive system. It would be a little scary to operate otherwise.”

“We’re just going to retrofit these things to keep them intact and keep them looking beautiful, but make them a little bit more safe,” Jon said.

Deana said, “There’s a lot of brickwork that needs to be worked on. Just general upkeep, but we really don’t want to change a ton about the building…Where brick has been painted, just do a fresh coat of paint over it.”

“The maple floors on floor two and floor three, we’d love to just sand them back and just put more finish on them. So just maintaining what’s there,” she added.

They hope to be all green energy, Deana says, “Our long term plan is to try to find some grants for solar panels for the roof. And everything on the inside in terms of heat and cooling, everything is going to be electric powered, so that we can just feed right into that solar.”

Jon says, ”The building is revealing some amazing detail and it’s absolutely gorgeous. Such a beautiful building.”

They say they discover more quirks every day.

“They put plaster over that first floor, the walls,” Deana said. “We’re realizing…peeling back, that there’s a ton of marble, slate and brick…we’ve been pulling that back intentionally to reveal that.”

They said they’ve been referring to a book, “The Village of Salem, 1761-1994” by Katharine Tomasi as a guide. It has details on the history of their building that have been useful in the construction process.

For example, it said “the sub floors are two inch pine, the top is one inch maple,” Deana said. “There’s all these details that are shared in that book that were kind of fun and helpful to decode the mystery of the building as we’re working through the renovations in the beginning.”

Something they’ve learned, Jon said, is that “the larger building you see, mostly from the road, was actually the second building. The original building is where the smokestack is.”

“The building was essentially designed to, if there was a fire, still stand. But the entire interior, which was made of wood, would fall in on itself.

“The original builder was so worried about garment factory fires, which were common… and built this building to be like a fireproof building. Fire safe. So it’s kind of neat.”

Deana said, “There’s bits of history that we’re seeing, just by standing in place and looking. There’s notes etched into the columns, one of which was talking about the CB Sports employees, and they made this little poem, limerick thing about…how they closed the shop for good on Christmas Eve in 1980-something.”