Colossal changing of the guard at Double-H 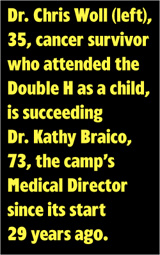 Double H Ranch — the camp for critically ill children founded in 1993 by Charley Wood and actor Paul Newman at a former dude ranch in Lake Luzerne — is making a colossal transition.

Dr. Kathleen Braico, 73, the camp’s medical director since the camp began 29 years ago, is stepping aside. Dr. Chris Woll, 35, is succeeding her.

His connection to Double H is profound and lifelong. At age seven, he was diagnosed with life-threatening alveolar rhabdomyosarcoma, a soft tissue cancer, necessitating chemotherapy and, at Sloan Kettering in New York, surgery. 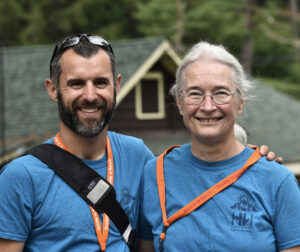 But amid the grueling treatment, he got the chance to attend Double H. “The camp was a driving force for me as a child and a teenager. It was life changing,” Dr. Woll says.

“If I remember correctly, it had only been open for one summer.”

Dr. Braico confesses, “I got involved in Double H, because I felt sorry for Max,” referring to Max Yurenda, then and now the the original and still CEO and executive director of Double H Ranch.

“He came to the [Glens Falls Hospital] pediatric department meeting in the late winter, I guess, of the first year,” Dr. Braico recalls, “and he said, ‘Charley Wood has asked me to open this camp for kids with serious illnesses. And we need a medical director, I was hoping we can get someone local.’ And we all smiled at him and then he left.

“And then he came back a couple of months later, and he said, ‘we still need a medical director.’ And I felt sorry for him. So I said, ‘Okay, I’ll do it.’ But I didn’t know what I was getting into.”

Was it hard to establish initial camp protocols? “It was,” says Dr. Braico, “because what I had was, you know, a manual from a regular old camp about what to do for bug bites and sunburn.”

When the camp opened in 2003, “we saw a handful of kids. And obviously, the first summer, we didn’t have that much. But after that we’re looking for kids with serious illnesses.”

Was she daunted? “Yeah, once I realized what it is I was pretty daunted. But by that time, we had Albany Med on board. So I didn’t have to be daunted all by myself, I had lots of backup. And they have been ab solutely the backbone of all of this…”

“So when I needed to figure out how do I write a sickle cell anemia form, I didn’t have to invent that. I called the hematologist at Albany Med and said, ‘What should be on this form?’ And they told me.”

She said Double H “talked to the pediatric department there about sending volunteer doctors for each session. Fortunately, Albany Med said yes, and they’ve been behind us every step of the way since then….

“So my job has basically evolved into, you know, policies and procedures.”

Only such camp running as one now

Dr. Braico notes that of all the SeriousFun camps for seriously ill children, Double H is “the only camp in the U.S. that is serving kids as campers this summer.

“All the other ones either were closed for the summer or they are just holding family sessions where each family is a separate pod…But here the kids do get to interact with their own cabin. It’s just the cabins do not interact with each other.”

There have been no incidents of Covid, said Dr. Braico, looking for some wood to knock on for luck.

She credits in part precautions of their Medical Advisor Board, including Ginelle Jones at Warren County Public Health, “who should be sanctified, that woman.”

Among other things, “Public Health provides us with the testing equipment, we didn’t have to pay for it because it’s expensive, so we can do tests on site.”

Credits counselors; they ‘get hooked’

She said counselors get “hooked” and return year after year.

“I never could have dreamed it would turn into what it is,” says Dr. Braico.

Of stepping down now as Double H medical director, she says, “It’s time. Camp needs somebody younger, needs somebody still in practice. I retired from my local practice about 10 or 11 years ago. And it’s also the position…What worked for me…is not what camp needs now.”

“My position has always been a summer position. So basically I’m paid for the eight weeks…that we would have camp during the summer. And I’m available all the rest of the year and I go to meetings and stuff like that, but I’m not officially on staff any other time except during the summer.”

“Camp had grown enough and it was getting complex enough that they needed somebody who was going to be there, not full-time…but it does require somebody to be at monthly meetings, or biweekly meetings, or whatever. And to be more involved in some of the decision making than I have been.”

Has she offered advice to Dr. Chris Woll, who is succeeding her? “Oh, yeah, we’ve been doing a lot of talking.”

“He’s perfect,” says Dr. Braico. “You couldn’t ask for a better person to take the place. And because he has literally more insight, knowledge of the camp than I do, because I’m not there all the time. You know, I didn’t live with the kids at camp. He’s really a terrific choice.”

What does Dr. Braico want people to know about Double H? “I want them to know it’s here. It’s amazing that a camp has been here for 29 years and I still will run into people who live here and don’t know about it. Each one of the camps in the system have to raise all of their own funds, all their own operating funds.”

The Double-H budget runs into millions of dollars — just shy of $4-million last year when camp was largely curtailed, nearly $5-million at full throttle a year earlier, according to its IRS Form 990 filing.

Dr. Braico’s many other civic pursuits include “the Glens Falls Medical Mission. I’ve been going to Guatemala with them since the 90s.

“We haven’t gone since the pandemic started, but we are working with the community still providing funds for food.

“And because we used to go every six months, we would store leftover drugs that weren’t going out of date for the next mission. And when it became clear we weren’t getting back soon enough, we got all those drugs distributed to the patients that we normally see.”

She’s said she’s also involved in “Helping Babies Survive,” which described as a World Health Organization program “to teach midwives newborn resuscitation with basic equipment, so that a midwife any place — it was developed for Africa actually — so somebody in a hut in Africa with no running water and no electricity can still resuscitate a baby.”

She says she has taught it in Bangladesh, Guatemala and Haiti.

Closer to home, Dr. Braico is a leader in the not-for-profit Amorak, which provides free activities for kids in Hudson Falls and Fort Edward. The Red Cross and climate groups are other of her involvements.

Says Charley Wood didn’t just start Double-H; he set in motion such camps around the world

“At that point,” says Dr. Kathy Braico, “Paul Newman had founded the Hole in the Wall…camp, and it had been in business for five years” providing a fun experience in Connecticut for kids dealing with life-threatening/life-changing illnesses.

“As I understand it,” says Dr. Braico, “Charley…wanted Paul to help him start another camp and called him and he wasn’t interested. He [Newman] said, ‘I’ve done it, you know, why should I want to do another one?’ And apparently, Charley said something along the lines of, ‘I may not be as rich and famous as you are, but I have just as big a heart and I want to do this.’”

“If you remember Charley Wood, he was a hard man to say no to. So he did convince Newman to go in with them.”

Dr. Braico continues, “So it’s my opinion that the reason there is a SeriousFun children’s network [of camps across the nation and around the world] now is because of Charley, because if he hadn’t pushed Paul Newman to start a second camp, and then hot on the heels of the second camp came the third camp and the fourth camp.

“And then somebody said, ‘Well, we have so many camps, we have to make something official about all the camps’…

“At first it was called the Association of Hole in the Wall camps. And then they changed the name to the Serious Fun children’s network. And then they expanded internationally.”

There are nine SeriousFun camps in the United States, and many more around the world, including South Africa, Ethiopia, Israel, Ireland, India, Vietnam, and others. — Mark Frost

Dr. Kathleen Braico calls her 29 years as the founding Medical Director of the Double-H Ranch “the biggest adventure of my life.” 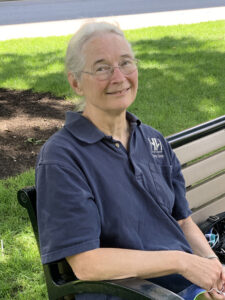 But she says, “What it does for the kids is just absolutely amazing…

And for the parents, it’s terrifying. The parents have spent however many years they’ve been dealing with whatever condition the child has, trying to protect them, and trying to make sure that people understand their child and will care for the child — and the trust that they have to put in us the first time they leave that child off at camp, that, it takes incredible courage.”

Dr. Braico says the camp experience “gives so much to the children…Paul Newman said that he wanted them just to be a kid, you know, just to have the joy of childhood back.”

She said it lets them escape “niches.”

“You remember third grade? So you’re in third grade, and you’re the class clown, or you’re the studious one, or you’re the one who never could understand math. And all your classmates who you’ve been with since kindergarten and will be with until you graduate from high school have put you into a niche, and they’re not gonna let you out of that niche. Even if you change, they won’t let you change.”

“Imagine if you’re in a wheelchair, you know. Add not just whatever awkwardness you had about a child being a child, but add the fact that you can’t get yourself up a flight of stairs, or that you can’t run because your illness, you know, doesn’t give you the strength to run or you spend months out of every year in a hospital and you miss all the things of childhood.

“The kids have put those kids into a niche, too. And many of them have a lot of trouble making friends and they certainly have trouble identifying themselves as being confident.

“But then they go to camp and they go up in the high ropes course! Can you imagine how they feel going home from that? Or they ride a horse for the first time. Or pop a balloon with an arrow in archery.”