By Cathy DeDe, Chronicle Managing Editor
Glens Falls will get a taste this week of the …

Glens Falls will get a taste this week of the highly touted Aurora Games. 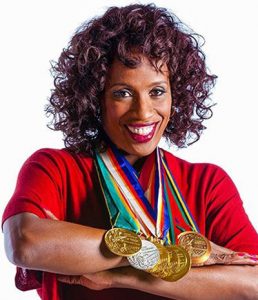 Women Olympians & sporting luminaries in Glens Falls (& Albany)
Above: Track great Jackie Joyner-Kersee and these others will be here this week. Also: Glens Falls native Erin Whitten-Hamlen (a goalie and the first woman to play hockey professionally), star members of the women’s hockey teams who will be playing here at the Cool Insuring Arena, and more. Meet them all at a free, open meet-and-greet at the Queensbury Hotel, Wednesday, Aug. 21, at 5:30 p.m.

Mostly held at the Times Union Center and Albany Capital Center, the week-long event, August 20 to 25, aims to promote women’s sports and showcase high profile Olympic medal winners and other athletes. The event also aims to advocate for women’s empowerment through sport, health, business and networking, organizers tell The Chronicle.

In Glens Falls, the Aurora Games Hockey contest will hold public practice sessions at the Cool Insuring Arena on Wednesday and Thursday mornings, Aug. 21 and 22; an evening exhibition match on Thursday at 7 p.m., and a youth hockey clinic with Glens Falls native Erin Whitten-Hamlen and other coaches on Thursday at noon.

Also planned: A free meet-and-greet with players, coaches and special guests including Jackie Joyner-Kersee on Wednesday, Aug. 21, from 4:30 to 6:30 p.m. at the Queensbury Hotel. 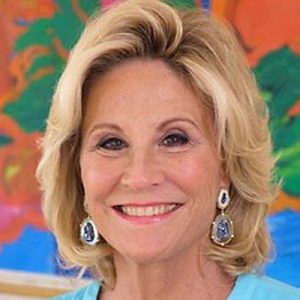 The hockey final will be Friday night at the Times Union Center.

Tickets here range from $15 for one session to $50 all-access pass, $25 for the clinic and Thursday game. 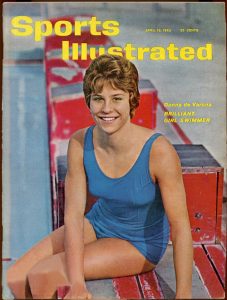 Also planned: Free Fan Zone, with player, coach and star meet-and greets; several “Conversations with Champions” and panels each day on topics including “Me Too” and sports, pay equity and careers, plus clinics, live music, and more.

Cathy spoke with players: ‘About more than sports’

Both said they were motivated to join the “Aurora” effort because it dovetails with their life’s work — Ms. Murphy, 57, with a passion that was laced equally with profanities, laughter and repeated orders of “Don’t quote me.” 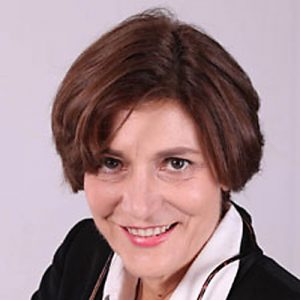 She recalled her 22-year career as a coach at Brown University, which ended some time after she sided with student athletes in a 1992 lawsuit that argued cutting funding to certain women’s sports was a Title IX violation.

She said since retiring as a coach, her efforts are “about creating opportunities for women, and using sports as the medium.” That includes helping to create “GetHerstory.com,” a virtual and brick-and-mortar museum of accomplished women in sports; her women’s sports podcast “The Grit”; and her Play It Forward foundation for gender equity.

“It’s not just about winning and losing games,” she says. It’s where you take the women’s sports model and make it better, taking on the leadership and owning the revenue chain. My goal is to elevate the conversation through athletics.”

At 17, she became the youngest journalist at ABC Sports, covering a men’s swim tournament at Yale. She went on to cover 17 Olympics, numerous Emmy awards, and created her own foundation.

She says, “It’s been a pivotal year for women’s sports because of the Me Too movement, how U.S. gymnasts have been standing up together, and with the women’s U.S. Soccer team raising the issue of equal pay.”

Ms. de Varona said, “These are all discussions that we will be having at the Aurora Games, conversations on health, and women’s issues, starting on the 20th, talks and panel discussions beginning at 2 every day, and the competitions at 7 o’clock at night.”

She said, “Most big sporting events, you don’t get to sit and talk one-on-one with the athletes, but that has been a part of this event since the beginning.”

She notes her own advocacy as a founder of the Women’s Sports Foundation, the first in America to serve women athletes, lobby for Title IX and promote opportunities and training advancement for women, “to give women a voice,” she said.

“I’ve been very lucky, every day of my career, to talk about these issues — how can women sticking together make a difference, through organizations like the Women’s Sports Foundation advocating for equal pay and working with the Olympic Committee to protect our athletes, and to discuss — what is the value of athletics for women.”

Organizer Jerry Solomon, who is married to skater Nancy Kerrigan — another luminary coming to Albany — said “It’s about women in sports, and in society. It’s much bigger than just who wins the basketball game.”

He said, among his other goals, was to keep access open with low ticket prices and many free events. See details on the Website, auroragamesfestival.com.

Aurora Games 2019-08-21
Ed Deso
Share !
Previous: Cathy: Hamilton is a moment of genius – and it is ‘us’
Next: Our August 22 issue
Copyright © 2020 Lone Oak Publishing Co., Inc. All Rights Reserved. Thank you for reading The Chronicle!