Andy Gregorio stepping down as weatherman on Channel 13; moves into tech

Andy Gregorio will step down in mid-June as a meterorologist on WNYT.

Mr. Gregorio, who lives in Glens Falls with his wife Mary, joined the station, Channel 13, in 2015. He previously spent 14 years on the air at WTEN.

Why the change? “It was something I had been contemplating for several years now,” Mr. Gregorio told The Chronicle in an e-mail exchange. “I have done all that I wanted to do in the meteorological profession and then some, too, like TV.

“I like to look for new opportunities and challenges. With this in mind I went back to school. I like computers and IT so I got an AAS in Networking and System Administration” at Hudson Valley Community College. 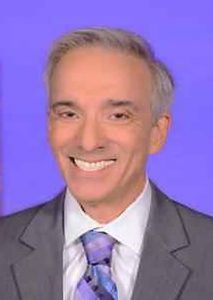 He will be doing information technology and audio-visual work at the Sisters of Saint Joseph Province House in Latham.

He said, “Considering that we use computers and specialized software in meteorology, going into it was a good fit for me.”

Here’s more from the e-mail exchange.

Chronicle: When did you start in meteorology?

Andy Gregorio: As a hobby when I was 9 years old. My first professional job was when I was in college at a private weather company. Probably around 1975, I would say.

Mr. Gregorio said he also worked for private weather companies in New York City and here in upstate New York, as well as the Franklin Institute Science Museum in Philadelphia.

Chronicle: What might people be surprised to learn about your profession — either the weather or television aspects?

AG: Weather requires a LOT of math and science. These classes are taken before one even takes any courses regarding the atmosphere. TV is very demanding of you. The hours are tough and because of this it can and often does affect your home life and personal life.

Chronicle: What stands out to you looking back at your career? What lessons do you most remember?

AG: Like I said earlier, what stands out for me in my career is that I set out to do a lot in the field, and I did do that and more. I know wherever I worked, whether in broadcasting or not, I got to meet some very interesting people.

Also, you know you have been around (in TV) for quite a long time when people in their 20s, 30s and 40s come up to you and say “I would watch you in the morning before I went to school;” then there are a few who say to you, “Because of you I want to pursue a career in meteorology.”

The biggest lesson I take away from being a meteorologist is that weather can be very humbling.