Thinking out of the box got Adirondack Theatre Festival producing artistic director Chad Rabinovitz “thinking In the box,” he says.

The result is a new six-month series of virtual theatrical events. They will be created in conjunction with Mr. Rabinovitz’s second theater company, the Bloomington Playwrights Project in Indiana. 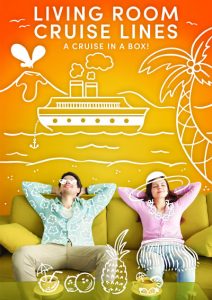 “The idea was to find a new way to operate,” Mr. Rabinovitz says, “creating live theatrical experiences in your home.”

Rather than streaming a recorded theater performance, “which feels like a consolation prize,” Mr. Rabinovitz said the idea is “to create content that is specifically designed for the new medium, creating a new theatrical art form specifically for Zoom.”

He said, “We will have live performers, production values at a higher quality, multiple cameras, tech and sound operators.”

Six interactive programs branded as “In the Box Entertainment” each begin with a box of supporting materials mailed to registered ticketholders.

“Come show time, you open it up and create the experience,” Mr. Rabinovitz says. Each is a ticketed event, on Zoom, with a limited roomful of participants sharing that experience in real time, he said.

One, for example, is a virtual cruise, a sort of destination-themed variety show, with live entertainment and a social director. The box might contain suntan lotion, fans, spa treatments, bingo cards for live play, or food samples, he said.

Costs will be shared by the two companies. Income will go to the “home” company of the purchaser.

Mr. Rabinovitz adds that the shows need not be limited to geographical audiences. Tickets will be available online beyond ATF and BPP, with a higher price for non “home” audiences, who will purchase through a separate portal, with revenues split between the two companies.

It’s a unique model that Mr. Rabinovitz said he hopes will garner attention from national media. He also aims to market it to other theater companies, he said.

This is in addition to the fund-raising program Adirondack Theatre Festival set up previously in lieu of its cancelled summer season. Donate any amount over $50 to receive access to a full catalogue of online clips and performances, as well as a $25 gift card to the ATF-supporting business of your choice.

The “In a Box” schedule: