5-foot snowfall: How do folks in Buffalo survive? Two told us

Last week’s storm that saw parts of the Buffalo area get socked with five feet of lake effect snow prompted me to wonder: How do they cope with such an onslaught?

We put the question out there on the Internet and urged people who might know people in the Buffalo vicinity to put us in touch with them.

That led to the following e-mail exchange we had with Beth in Lancaster, east of Buffalo, where the storm hit hardest.

Beth: Well the sun is shining at the moment but they are expecting another snow band to come through with possibly another 1-2 feet of snow tonight.

When you live in Buffalo, you know the importance of keeping your pantry and wine rack stocked this time of year! As long as we have electricity, we’ll be fine.

Chronicle: Good nights for wine! Do you have a wood fireplace or woodstove just in case the power quits?

Beth: We have a wood burning fireplace and 2 cords of wood. Plus, we have a generator that we picked up after the October storm of 2006 when we were without power for almost a week.

Ironically, the concern for this weekend is going to be flooding as temps are predicted to reach the 50’s and all this snow starts to melt.

Chronicle: Fortunately you’re ready for anything. A raft too?

Beth: No raft but we do have a battery powered back up to the sump pump! We learned the hard way on that one.

Through Chronicle Outdoors Editor Dan Ladd we heard from his friend Dave Barus in Aurora.

He wrote in part:

YEP Rose and I are in it….but we are just south of the 10 mile focus-brunt of it….have about 18 inches here…..some pics from the morning hunt….

The folks in Lancaster and South Cheektowaga have an amazing 60+ inches!

Several folks still trapped on the thruway…bout 5 folks have died doing the heavy snow and pushing cars….not smart stuff…there is about 5 inches of slush under the several feet of snow…the killer.

There are warnings everywhere on the news on what NOT TO DO…these folks did not heed the “BE CAREFUL” warnings…sad for their families. Carbon monoxide warnings too, with the high snow levels. 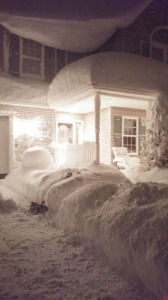 Airports are shut down and/or limited outbound. My nephew is in from Florida hunting with me, he has just NOW been told by Southwest that his flight out has been pushed to Saturday! He is a business owner (daycare) with meetings ahead for him and not a happy guy right now….BUT we WILL hunt anyway later and tomorrow now. Yeaaahhhhhh.

Things happen for a reason. Maybe this is his chance for a window into an opportunity for a 16 point Western NY buck!!!