It was built in 1973 for Continental Insurance, which had purchased the Glens Falls Insurance Company and razed its long-time building next-door.

Banquet space on the top floor offers picturesque long views to the north and east.

There are 850 parking spaces, in the on-site garage and three satellite lots. “And the parking garage was designed to handle two more stories,” Mr. Levack adds.

The listed property — which is owned by investment entity 333 Glen Street Associates — does not include the grassy triangle at the intersection of Bay and Glen Streets.

Mr. Levack says 333 Glen is 95 percent leased, with its two larger tenants expected to resume residency in the coming months. “That’s a question more for the building manager,” however, he adds. 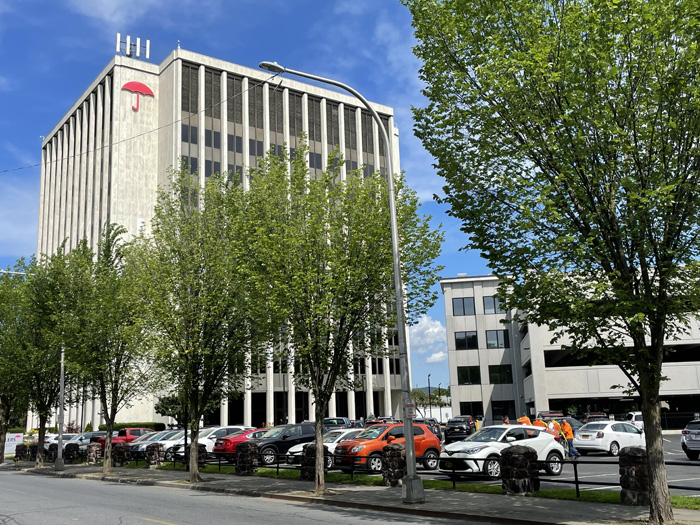 “To be at 95 percent is a good occupancy,” he says. “For the last five years it’s been on an upwards occupancy trend.”

“There’s a lot of volatility in the office market right now,” Mr. Levack says. Even as businesses are downsizing office space, “that creates tenants in the market,” looking for different space or to reconfigure the spaces they currently occupy to accommodate the downsizing, he said.

Mr. Levack said he just closed Friday on the $2,850,000 sale of a 36,000 square-foot Schermerhorn property, a mixed professional-medical office building at 25 Willowbrook in Queensbury. The building’s listing price was $2,995,000.

He says he has another high profile downtown building under contract as well. 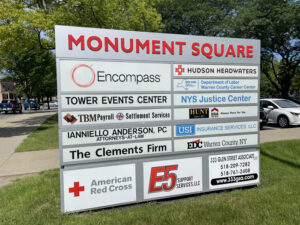 “I’m grateful for the amount of transactions being done and optimistic for the outlook of the commercial building market here. Urban flight and low interest rates are driving the residential market, and we are seeing that affecting the commercial market as well.”

He says that as urban flight brings new home buyers to this market, “I hope, what I see is, they plan on bringing their businesses with them.”

Prior to the pandemic, Mr. Levack says, “Glens Falls was seeing good activity,” including a 10-year lease with Valor Healthcare, a national Veterans Administration health care provider, at 101 Ridge Street in the former Andritz office complex.

Mr. Levack has several high-profile commercial properties on the market, including the former Broad Street School at One Broad Street Plaza. The 50,000-square-foot building is over 80 percent occupied, he said. Listing price: $3.5 million.

“It’s a good time to be a seller,” says Mr. Levack, adding, “There are good opportunities for buyers as well.”

Not for sale: The Bay-Glen wedge; GF targets for park

The $15-million, 333 Glen property listing that features the signature 10-story 1973 building popularly known as “the Travelers building” does not include the green “wedge” of lawn across Bay Street from the Civil War monument.

The City approved subdivision of that roughly three-quarter acre parcel from the property almost a year ago. Developer Chris Patten had a contract to buy hoping to build, first, a mixed-use project, and then, in the face of opposition, apartments.

That project is apparently now off the table while Mr. Patten pursues a similar project but on land behind Heritage Apartments (the former Glens Falls Junior High School) three blocks north.

Mayor Dan Hall is seeking to acquire the “green wedge” of property for a new park. He says it will ideally be funded through Glens Falls’s $10 million Downtown Revitalization Initiative state grant. That effort is on hold, awaiting state approval. — Cathy DeDe

Share
Previous Adirondack Balloon Fest is a ‘go,’ but curtailed
Next Double H’s new medical chief was camper there as child with cancer